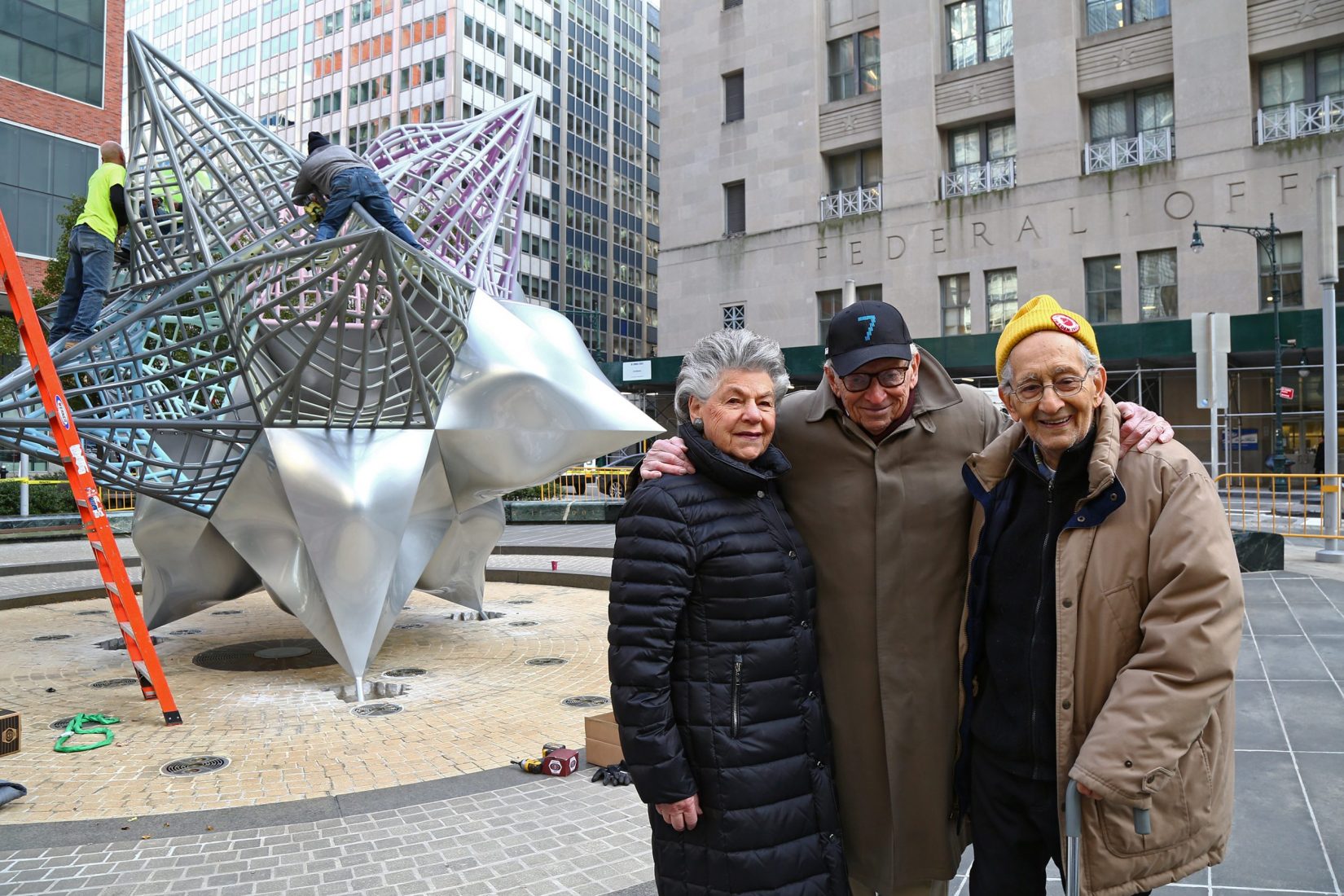 Silverstein Properties has announced the installation of a new sculpture – Jasper’s Split Star by legendary artist Frank Stella – in the Silverstein Family Park at 7 World Trade Center in Lower Manhattan.

Larry Silverstein, Chairman of Silverstein Properties, acquired the artwork to display in the center of the park’s fountain, a location that was previously occupied by Jeff Koons’ Balloon Flower (Red). Mr. Koons’ sculpture was on loan from the artist since 7 WTC opened in May 2006 until late 2018.

One of the most influential American artists of the 20th century, Frank Stella has explored the formal imperatives of art, including line, color, and form. Mr. Stella has been the recipient of numerous awards and honors throughout his career, including the National Medal of Arts, which was bestowed on him by President Obama in 2009. Mr. Stella lives and works in New York City, and his work can be found in prestigious collections worldwide, including the Museum of Modern Art, New York, the Los Angeles County Museum of Art, and the Tate Gallery, London.

Mr. Silverstein had previously purchased two paintings by Frank Stella in the late 1990s that he displayed in the lobby of the original Seven World Trade Center. Laestrygonia I and Telepilus Laestrygonia II were both destroyed on 9/11.

“Art has always played a big role in my personal and professional life,” said Mr. Silverstein. “It adds an exciting dimension to our lives and everything we do. It expands our thinking and offers a glimpse into the creative minds of the artists. I am thrilled to bring this stunning piece by Frank Stella to the World Trade Center so that Downtown’s workers, residents and visitors can enjoy it.”

Jasper’s Split Star was inspired by a painting Mr. Stella made in 1962, Jasper’s Dilemma, itself a tribute to his contemporary Jasper Johns. Six of the star’s sides are solid aluminum, and six are open and spray-painted pale shades of blue, purple and grey. Mr. Stella created the 202” x 257” x 249” sculpture in 2017. Most recently, Jasper’s Split Star was included in an exhibition of 25 works by the artist at the Aldrich Contemporary Art Museum in Ridgefield, Connecticut, from September 2020 to September 2021.

Frank Stella commented: “Jasper Johns often played a grey-scale against an obvious chromatic scale of red, orange, yellow, green and blue. For the most part, it was on a two-dimensional surface. It was hard not to think of transposing that kind of dynamic into three dimensions. So the split star came rather naturally into being as a play of Jasper’s early paintings.”

Silverstein Properties has supported art and artists in its office buildings for over 30 years, ensuring they remain an integral part of the fabric of Downtown Manhattan.

When Larry Silverstein opened the original Seven WTC in 1987, Larry and his wife Klara spent several years filling the lobby with contemporary art. Installations included The Third Circle by Al Held, a Roy Lichtenstein entablature, Cloud by Louise Nevelson, Crusading Euphoria by Ross Bleckner, the two large paintings by Frank Stella, and others.

When the company opened the new 7 WTC in 2006, Silverstein collaborated with Jamie Carpenter and architect David Childs on the building’s stainless steel façade, as well as on the lobby art installation, For 7 World Trade, by Jenny Holzer. The lobby also features two metal sculptures, Easter Monday and Equilateral Quivering Tower, by Kenneth Snelson; two large paintings, Element No. 1 and Element No. 31, by Ran Ortner; as well as work by Richard Jolley, Nicole Chensey, Andrew Kuo, Greg Bogin, Regina Sculley and Scott Reeder. The other World Trade Center buildings feature large art installations including Joystick by James Rosenquist at 3 WTC, and Sky Memory by Kozo Nishino at 4 WTC, among others.

Last year, Larry Silverstein’s grandson Cory and his friend Josh Pulman launched Silver Arts Projects, a non-profit organization dedicated to supporting emerging artists. Each year, 25 young artists work out of a studio on the 28th floor of 4 WTC. The residency space is dedicated to art making, providing artists with customized studios and the tools, platform, and resources to expand their practices and further their careers. The floor also features community spaces for study and dialogue, and allows artists to collaborate while enjoying sweeping, 360-degree views of the New York City skyline.