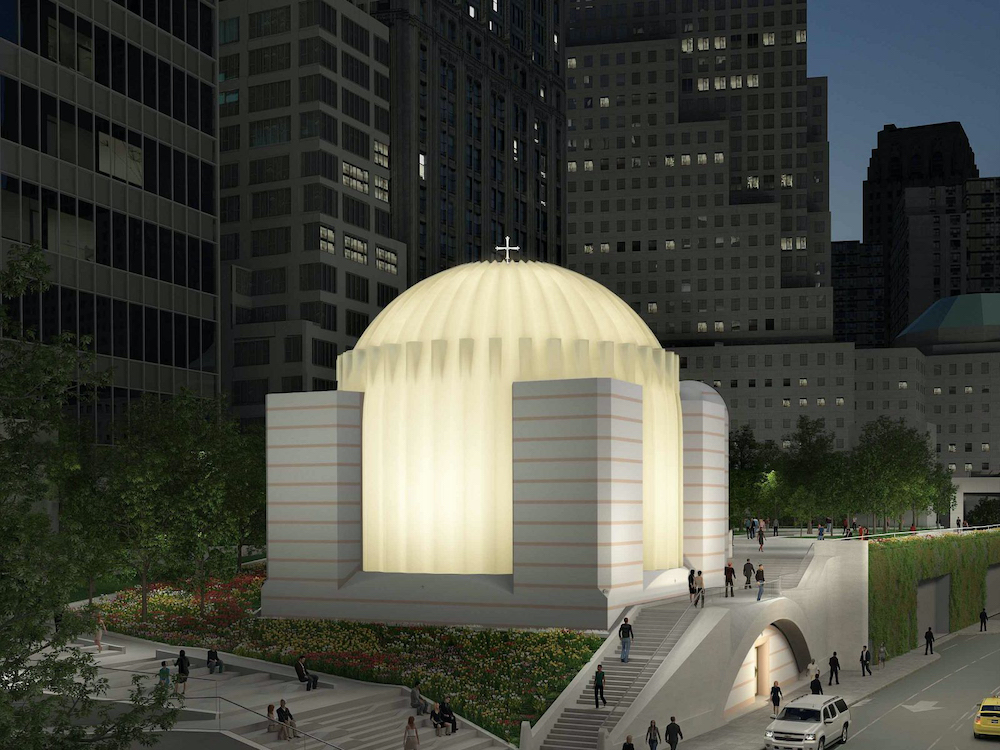 The pleated, marble-clad exterior of St. Nicholas Greek Orthodox Church and National Shrine will glow from inside. Rendering by Santiago Calatrava Architects and Engineers.

St. Nicholas Greek Orthodox Church and National Shrine will be a beacon for the world.

FAITH CAN GUIDE US THROUGH EVEN THE MOST DIFFICULT OF TIMES. On the evening of September 11, 2001, New York’s collective faith shone through the rubble of the St. Nicholas Greek Orthodox Church, which, though destroyed, still served as a gathering place that day in downtown.

“The church is reflective of the lives lost, and the light that was lost. For us, every life is a light that shines in the world, and when we lost 3,000 souls we also lost their light,” says Father Alex Karloutsos, Vicar General of the Church. Yet with faith came perseverance, and in a rebuilding process that lasted over 20 years, the St. Nicholas Greek Orthodox Church and National Shrine was redesigned, constructed, and is now set to open in April 2022.

The push-pull behind the church in its 20 years of rebuilding was similar to that of the World Trade Center, which faces numerous delays and permit challenges even to this
day. Though the proposal was immediately approved by then-Governor George Pataki, there were seven to eight years of negotiations with the Port Authority, as well as another seven years of fundraising efforts which delayed construction until 2020.

Santiago Calatrava, the architect behind the World Trade Center transportation hub known as the Oculus, was selected as the designer for St. Nicholas following an invitation-only call for proposals. His design, which draws inspiration from the Hagia Sophia in modern-day Istanbul, pays homage to the roots of the Greek Orthodox Church while bringing in elements of light that give an impression of spiritual ephemerality. Karloutsos describes Calatrava’s vision as though, “He felt that it should be like a candle, and as they say, ‘Better to light a candle than curse the darkness.’”

This past September 10, St. Nicholas Church also participated in the Tribute in Light to the 20th anniversary of 9/11 by casting blue light projections over its facade, with some key members of the church including Vice Chairman Michael Psaros helping to facilitate the first public event at St. Nicholas. “With the church lit up it will draw people to it, because people always move towards the light over darkness,” Father Alex emphasizes.

When St. Nicholas Church opens to the public during Easter season in April 2022, it will act as a gathering place not only for worshippers, but for New Yorkers seeking to commemorate the history of Lower Manhattan. “We’re going to be showing icons of the resurrection of St. Nicholas Church, which will recognize first responders, firemen, Port Authority police, and the New York City police who were lost,” Father Alex says, including that members of the public “will have an opportunity to meditate, to offer prayers, to reflect.” Tours explaining the iconography and history of St. Nicholas, as well as a bereavement center offering counseling for individuals, will also be featured.

Looking towards the upcoming opening, Father Alex says, “we’re very excited that we will help bring people together, not with hatred but with love, and with the ultimate symbol of forgiveness.” DT

Follow the project’s progress and learn more about the St. Nicholas Church and Memorial opening at stnicholaswtc.org.