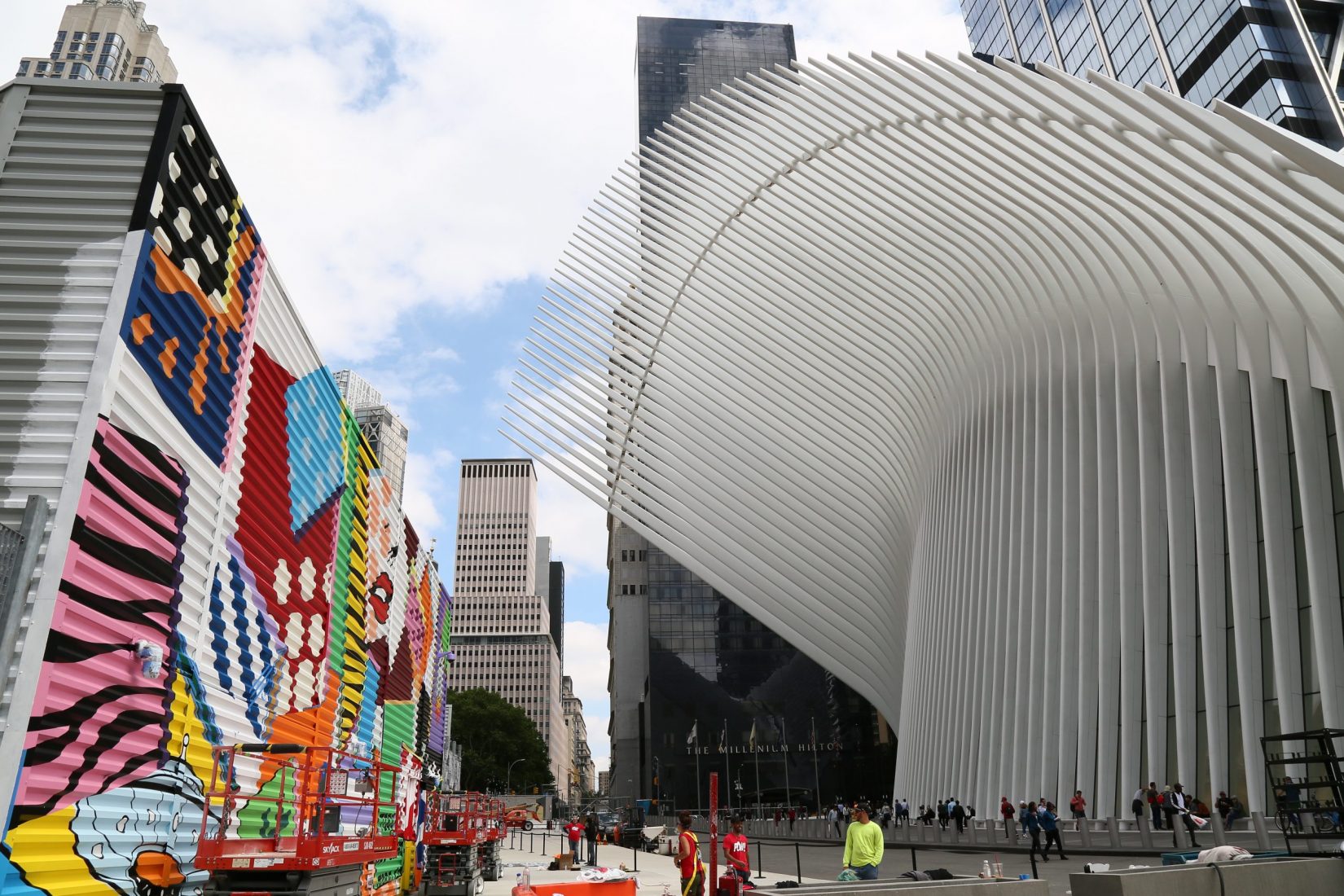 The city of the future is here and now at the World Trade Center.

IN THE LATE SUMMER OF 2010,I got a phone call about a potential documentary film project. Would I like to meet with the producers, who were looking for someone to help develop their storyline? Sure, I replied. Could I come down to 7 World Trade Center for a meeting? A wave of dread washed over me. The World Trade Center, where 2,606 of my fellow New Yorkers were murdered nine years earlier, which I’d watched from my neighborhood in Brooklyn?

Nine years after 9/11, I still hadn’t been down to the site. The endless parade of headlines trumpeting lawsuits, stalemates, political opportunism, incompetence, greed, and infighting hadn’t exactly inspired a trip down to see what stagnation looks like up close. Why rebuild anything at all? I was still of the Speed Levitch school: just turn it into a buffalo park. Seven World Trade was the only tower that had been rebuilt (because its footprint wasn’t on Port Authority land) and still hadn’t reached full occupancy. That it was already home to an eclectic mix of firms from range of industries didn’t matter to me. Ground zero was still ground zero. I wasn’t alone. When I later asked our agent to come down for a meeting, his reply was unequivocal: “No way.” Such were the depths to which many New Yorkers’ feelings about the site still ran, even nine years after the event. I’m being irrational, I thought, and agreed to meet with them.

I spent much of the next three years on the site. On it, above it, beneath it, surrounding it, as we recorded the rebuilding process — from 70 feet below grade to a quarter mile above it — for what would become the documentary film 16 Acres.I watched as the “Freedom Tower” rose from a concrete stub up into the clouds, only to be rebranded the flaccid, if less ostentatious, “One World Trade.” I rode the interminably slow construction elevators and climbed the vertiginous open-air “stairways” that clung to the side of the structure, humbled by the seasoned construction pros who nimbly bolted up and down them as the tower surged skyward at the breakneck pace of a floor per week.

I touched the concrete slurry wall at the base of the pit — now part of the museum, then little more than mud and dust — with site master-planner Daniel Libeskind. I watched as an elite team of plumbers tested the colossal 26,000-gallon-per-minute water pumps beneath the Memorial pools, an area that would later be flooded by Hurricane Sandy, molding up the drywall and shorting out the vast below-grade electrical web mid-installation. This is just to name a few of the more memorable moments. It was only through this protracted, granular engagement with the site that I was finally able to fully process 9/11. That I’d one day be working in One World Trade Center had never entered the imagination. But sure enough, on August 3, 2010, Condé Nast — a company I’d freelanced for, for almost a decade — signed a tentative deal to become the anchor tenant of One World Trade. “Think: Anna Wintour, the imperious editor-in-chief of Condé Nast’s Vogue, who inspired the novel and film The Devil Wears Prada, and Graydon Carter, the bon vivant editor of Vanity Fair, stepping out of black limousines at ground zero,” marveled Charles Bagli in the Times. It would be another four years until moving day, but it was a major turning point for One World Trade and a bellwether in the evolution of downtown from “the Financial District” to the home of a diverse array of companies from a range of industries, many of the newcomers big media and technology firms. (The financial industry now represents just a third of the pie, down from 56 percent in 2000.)

Not everyone at Condé was thrilled about the move. I heard more than once: I hope they fire me before I have to work in there. It didn’t help when Chris Rock joked on SNL that the building should be renamed the “Never Going in There Tower” the very same week the move began. But it didn’t take long for the skeptics to thaw once we’d settled in. It only took a few Instagrammed sunsets over the Hudson for the anxieties to begin to melt away. Dazzling views like these certainly weren’t something we had at the company’s previous spread in Times Square.

Reinvention, transformation, innovation, devastation – these are just a few of the themes of downtown. Build it up, tear it down, and build a better one, or a worse one, depending on your point of view (but in any case, a newer one). The grand, ornate “skyscrapers” of Newspaper Row, arguably the world’s first, were torn down in the mid-20th Century. Radio Row, once home to the largest concentration of electronics businesses in the world, was reduced to rubble to make way for Minoru Yamasaki’s gleaming, gargantuan Twin Towers and their surrounding superblock. The iconic 47-story Singer Building was razed in 1968, at the time the tallest building ever to be torn down, to be replaced by One Liberty Plaza. “Do you actually think they might one day tear down this building to make way for something new?” a colleague at One World Trade once asked me. The question hadn’t yet occurred to me, but the answer was unequivocal: Why, yes, I do. Change is the only constant. Oh, and those stunning views.