The Dialogue of War in The City of Conversation 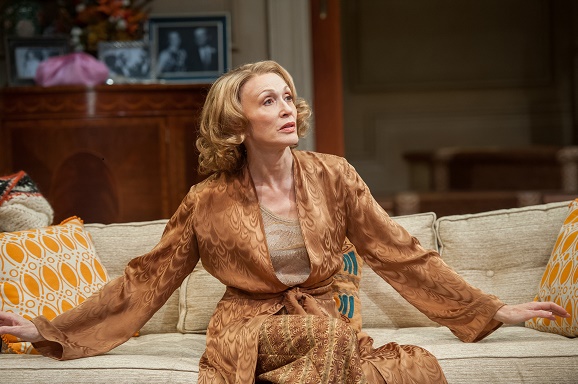 Hester Ferris (Jan Maxwell), the colloquial mastermind behind many of the nation’s policies.

Conversing can be an art, like a dance between two people getting a feel for each other’s movements and mannerisms. Sometimes saying the right thing can open doors to opportunities, and often saying the wrong thing can get that door slammed right in your face. The words we choose have a great impact on the relationships we hold dearly, and the communication we conduct can make or break a bond that has existed since childhood.

The City of Conversation takes this waltz and explores every avenue the discussion can lead to, for better and for worst. The conversation begins in the Georgetown manner of Hester Ferris (Jan Maxwell), located in Washington D.C.. Hester regularly hosts dinner parties attended by Senate leaders in order to keep her finger on the pulse of the nation’s political developments and influence their thought processes the only way she can: through elaborate discussion.

Maxwell, a five-time Tony nominated actress, said Hester has been a wonderful part to play because her passion for politics mirrors Hester’s, and it’s been fascinating for her to see how many factors can influence policy making.

“The hostesses of the 60’s and the Kennedy era, slowly their power dwindled and it became obsolete,” Maxwell said. “But many dinners were held and many policies were made over these dinners, so it was actually like an arm of the government, as Hester says.”

On the morning of one of those very engagements, Hester’s son, Colin (Michael Simpson), returns home from school in London, along with his new girlfriend Anna (Kristen Bush). Her once clean-cut boy has become a bushy haired young-man lacking direction in life, but Anna on the other hand is an advocate of the growing fiscal conservatism movement who can stand toe-to-toe with the silver-haired Senators attending Hester’s get together.

“We have a stellar cast; there’s not a lemon in the group,” Maxwell said. “We’re pretty much all politically passionate and so it was a great room to be in. Doug Hughes (the director) maintains this wonderful room that’s really quite miraculous and full of intelligence, passion, and joy. You feel safe to say anything and do anything.”

The story unfolds over six presidential administrations, and the evolution of the political environment underscores the ubiquitous tensions felt by the members of the Ferris family. Maxwell said the playwright, Anthony Giardina, created a smart play intertwining the political and personal lives of each character, which drags the members of the audience into the contentious world.

“The political argument is so fascinating, and to encapsulate 30 years of politics is so engrossing,” Maxwell said. “That’s the part of the play that grabs the heart, because I think everyone has had loss in their life, and have made mistakes that change the course of their lives; I think people can really relate to that.”

The City of Conversation is a nuanced display of how a life dedicated to political motivations can influence familial relationships. The ripple effect of a few decisions made over a 30 year period illuminates the power politics play in the American way of life. The dinner party may seem archaic in today’s world of social media, but these engagements served as a battleground where heady conversation was the weapon of choice, and the Ferris family is the dynasty in this theater of war.