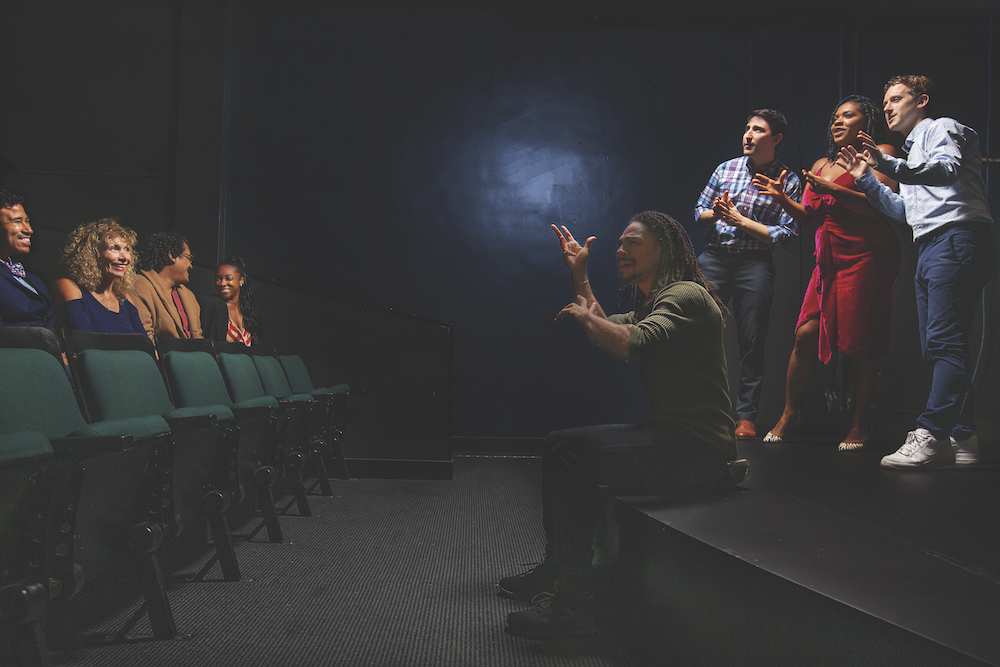 Broadway SIGNs! productions offer collaborations for deaf artists and Broadway talent to promote ASL and deaf culture in the performing arts. The showcase is a regular event, pulling together performers from the deaf and hard-of-hearing performance community. SIGNmation was founded in 1990 by Jo-Ann Dean, inspired by a stage door encounter with Tony-winning deaf actress Phyllis Frelich in New York City.

“She invited me to Deaf West Theatre,” explains Dean. “Upon meeting incredible deaf and ASL artists, I sought a way to bring ASL intomainstream culture, to give artists a platform and to promote the visibility of ASL on stage, in theatre, and in film, and champion accessibility to the arts.” Dean is now a coproducer on A Commercial Jingle for Regina Comet starring Alex Wyse, Ben Fankhauser, and Bryonha Marie Parham with book and lyrics by Wyse & Fankhauser. As the story goes, two nobodies dream of writing one hit song for everybody, sung by one aging diva.

The musical comedy lead producer Cody Lassen has opened doors to new producers and welcomes some of Broadway’s first ASL-interpreted performances for the musical. Dean and SIGNmation welcome Wall Street to sponsor accessibility as stages reopen.

Edmond, 31, who has performed in Broadway productions of Spring Awakening and Children of a Lesser God, was given her own day of recognition in 2016 by the City Council of Los Angeles, which designated September 28 as “Treshelle Edmond Day.” This year, she performed a one-woman show in New York City called “Light Up Within,” which follows her journey to find her identity.

“It means the world to me that I was provided a platform to perform in American Sign Language,” she says. “I love that SIGNmation believes in culturally-accessible content for arts, theatre, film, and television to make sure everyone is included.”

Gabriel Silva, who performed Empire’s “Chasing the Sky” at the showcase, is also a father and teacher with the Sign Language Center, an educational program owned and run by Alan Roth and taught exclusively by deaf instructors. It is also a sponsor of Broadway SIGNs!

“I never planned to teach,” he says, until Roth saw him perform and asked him to teach one class. “One class became two, and then three and four. It was like a new undiscovered talent that I didn’t know I had.” But Silva remains a performer first and foremost, including in LA with Dean’s ASL Cabaret. This year marked his first Broadway SIGNs! performance. “I always knew I was talented,” says Silva, “but I wasn’t sure how to show the world. SIGNmation has given me a platform to grow as an artist and opportunities to meet and collaborate with other deaf artists.” He continues, “I’m forever appreciative for Jo-Ann and everything she does for us as a community.” DT

A Commercial Jingle for Regina Comet