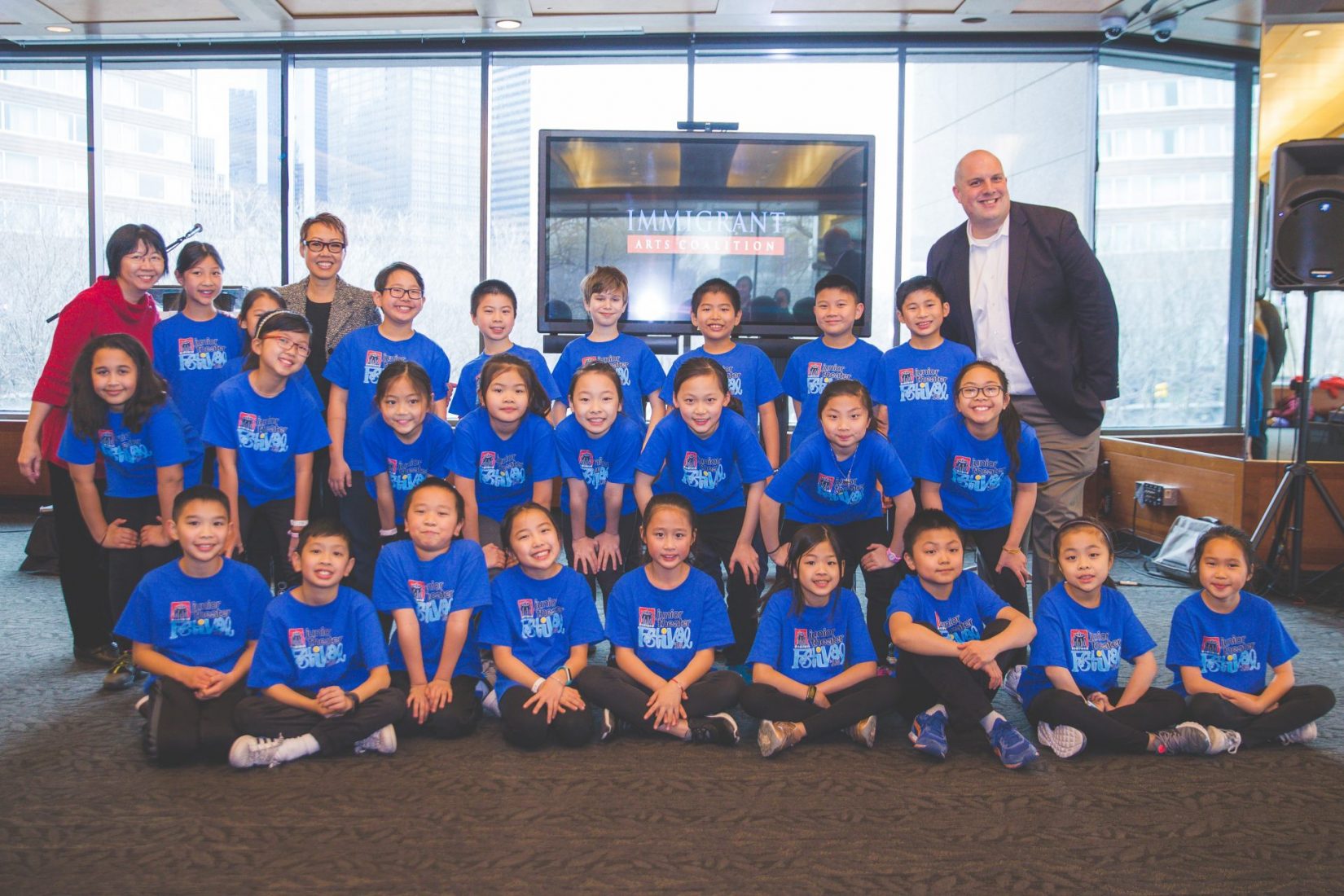 Held at the Museum of Jewish Heritage, home to Coalition founding member National Yiddish Theatre Folksbiene, the launch event drew about 75 attendees, as members presented plans to serve as a united front for advocacy and audience development, and work to collaborate with continuous shared programs, including the second annual, multi-day Immigrant Arts Summit this summer.

“Artists are the cornerstone of our society,” said Marlena Fitzpatrick, President of the Immigrant Arts Coalition. “Art heals. Art unites. Artists are doers. We work shoulder to shoulder to build this nation and our native homelands alongside union workers, domestic workers, farm workers, doctors, nurses, teachers, lawyers, public policy makers, executives and entrepreneurs, cooks, tech and inventors, activists, veterans, and emergency responders who risk their lives to save ours.”

“This is why we’re here today; we must tear down those invisible walls and coexist in solidarity with all cultures, all communities and all forms of art. We’re doing this through advocacy as we’re working with various facets of the community to help undocumented and documented immigrants. We’re also collaborating by cross-pollinating our audiences and programs amongst our coalition members. In doing this, we’re fostering diversity and unity,” she said.

Michael S. Glickman, President & CEO of the Museum of Jewish Heritage, noted that the Museum’s guiding principles stand against fascism, restrictions on free speech, and limits to the humanities.

“We are dedicated to supporting free expression and convening diverse thinkers for important conversations,” he said. Across the water, Lady Liberty lifts her lamp and Ellis Island marks the gateway through which millions flowed into this country seeking refuge. New York Harbor is a fitting backdrop for conversations that touch on the challenges and urgencies of art about immigration.”

The Coalition began forming in July 2017, when a group of arts and cultural organizations held their first arts summit at the Museum of Jewish Heritage. Leaders of the Coalition announced an agenda focusing on key areas of the arts: Advocacy, Diversity Support, Collaboration, Empowerment Through the Arts, and Artistic Engagement.

“Your being here this morning, your interest in the ongoings of the Coalition, and most importantly, your support of arts and culture, are paramount to the future of a cultural mosaic without borders,” said Chair of the Immigrant Arts Coalition and Chief Executive Officer of the National Yiddish Theatre Folksbiene (NYTF) Christopher Massimine. “Your engagement helps to deliver an important, and timely message: diversity is our strength, and illustrates why we must unite together to support the immigrants who for generations have contributed to the advances, collaboration, and innovations that have helped enrich our country through the arts. This reflects our mandate to advance immigration rights through artist advocacy, foster multicultural collaborations, encourage diversity initiatives, promote empowerment, and be the foundation of support for those who raise their voice.”

In celebration of the artistic diversity of programming in New York City, the event featured moving performances by Yiddish Theatre star Daniel Greenwood; acclaimed Latin jazz pianist Carolina Calvache of Colombia; and, 25 students from PS 124’s Theatre Club, which is an educational outreach program of the National Asian Artists Project.

Sita Chay, violinist from the Grammy-winning all-female mariachi band Flor de Toloache, said: “What people don’t always recognize is that we are all benefiting from the rich cultural diversity. Behind every culture is the influence of our neighboring cultures and on a broader spectrum every culture commonly carries the most humanistic side of us. As a musician, it is my duty to invite all musicians to come together and create art that’s ground-building and celebrates culture. Because, when all else collides, music unites. Instruments, for example, reflect that. String and percussion instruments show that human side of us: our common thread and our heartbeat.”

Added Shawn Rawls, Director of Emotions Physical Theatre, “Art for me saved my life… Without diversity, you won’t get the wonderful things outside of your own bubble. One head is not as smart as many heads and many perspectives.”

The event concluded as Coalition members announced that a second annual Immigrant Arts Summit will be held August 6 to 8. “The Summit promises to be a memorable event that will continue to engage the community, create a vital dialogue, and further the success of our artists and our Coalition,” Mr. Massimine said. “We will bring together not only some of our city’s finest immigrant performers, but distinguished and renowned experts on the arts and culture to examine the challenges and opportunities that exist for immigrant artists in our country today.”

You can learn more about the Coalition and its principles on its website and view the Coalition launch event, including performances, here.