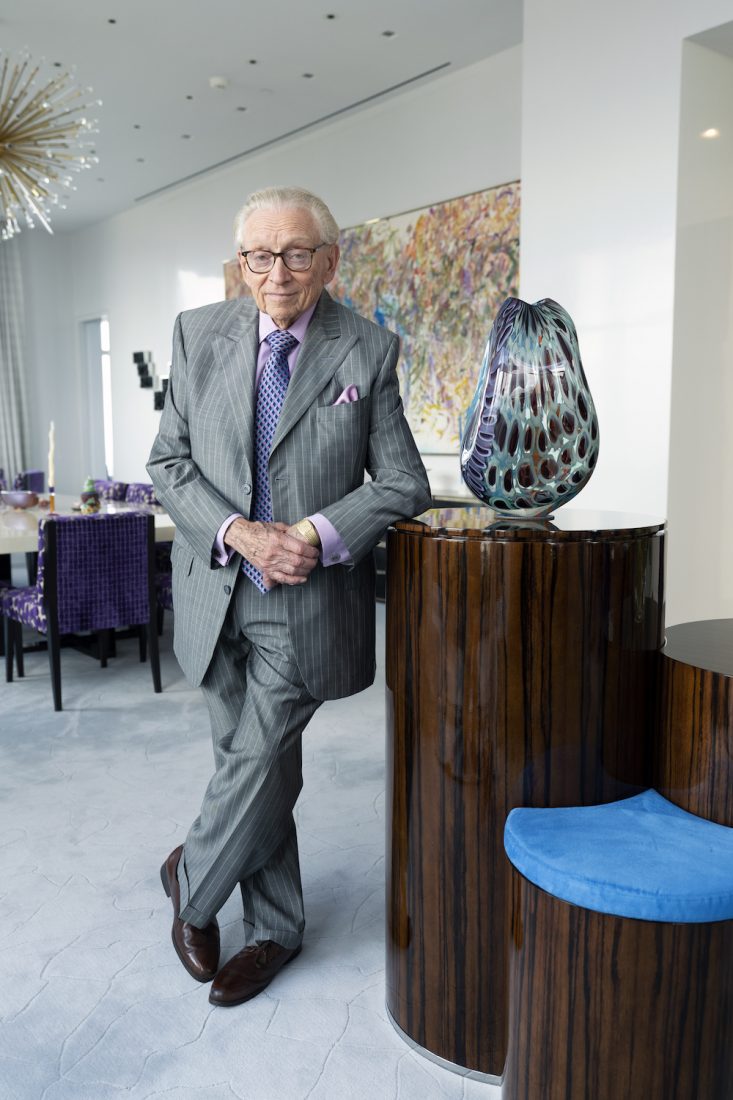 Larry Silverstein has spent a lifetime shaping the New York City skyline. He isn’t done yet.

“BUY CORNERS,” Larry Silverstein replies without hesitation when asked what the most important lesson is that his father Harry taught him about the real-estate business. “If you buy a corner, you have frontages on at least two streets, right? And if you get lucky enough to be able to buy a block front, that gives you even more possibility.” Trained as a classical pianist, Harry had struggled to provide for the family during the Great Depression, eventually becoming a commercial real-estate broker to make ends meet.

Curious about the business, Larry went to work for his dad after graduating from N.Y.U. in 1952. “Something that hit me very early on,” he recalls, “is that I wanted to own something. I wanted to be an owner.” Lacking cash for a down payment, the Silverstein father-son duo took a page from Harry Helmsley and Lawrence Wien’s playbook, scraping together a syndicate of investors to buy their first property, a shabby industrial loft building on East 23rd Street, in 1957. It may not have been a corner property, but they made it work by converting it to office space and leasing it out to white-collar firms. “It was sink or swim,” Larry says of their first venture. “Failure was not an option.”

Silverstein, who turned 90 in May, still reports to the office almost every day, invariably dressed to the nines in a double-breasted suit with a colorful tie and matching pocket square, dispensing friendly salutations to everyone he passes along the way. But behind the elegance and old-school charm, the Brooklyn grit and street smarts remain. “It was not a very luxurious existence,” he recalls of his upbringing on the top floor of a six-story walkup in Bed-Stuy, “which wasn’t nearly as trendy of a place as it is today.”

That Brooklyn grit would come in handy when it came to rebuilding the World Trade Center. When Silverstein acquired the Twin Towers in July 2001, he could never have imagined that within months they’d be gone—and he’d be stuck with a 99-year lease that obligated him to continue paying the Port Authority, which owns the site, $10 million a month in ground rent. The lease also stipulated that he rebuild all the office and retail space that had been destroyed on 9/11.

To make matters worse, quite a few of the two dozen companies that had insured the towers—to the tune of $3.5 billion—were refusing to pay Silverstein’s claims. It took five years of litigation and the intervention of New York governor Eliot Spitzer to finally move the needle. “I called him, and I said I can’t collect,” recalls Silverstein. “So, he brought them all to New York and told them, ‘The courts have found that these are your obligations, so if you don’t pay, you’re never gonna do business again in the state of New York.’” In May 2007, they finally agreed to pay Silverstein the $2 billion he was still owed, marking the single biggest insurance settlement in history. A tidy sum indeed, but still not nearly enough to fully rebuild the Trade Center. 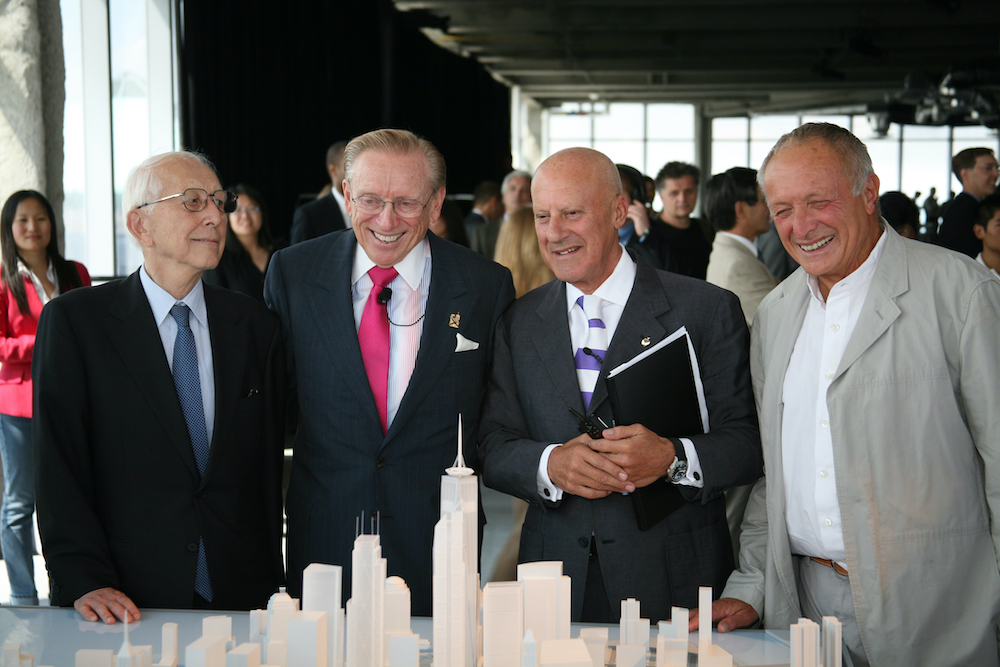 Despite the many professional battles, Silverstein says it was the “naysayers” who personally affected him the most. “The negative voices kept telling me I would never succeed,” he says. “No one will ever come down here. No one will ever rent space. Why are you wasting your time?” Yet he remained determined to rebuild. Not for personal gain—he stood to make little money from the effort and was already well beyond retirement age—but because otherwise would signal defeat. “If you don’t rebuild it, then the terrorists have won, right? I absolutely couldn’t let that happen.” When pressed if there was ever a point at which he doubted that rebuilding office towers adjacent hallowed ground was the right thing to do, his answer is immediate and unequivocal: “Never.” 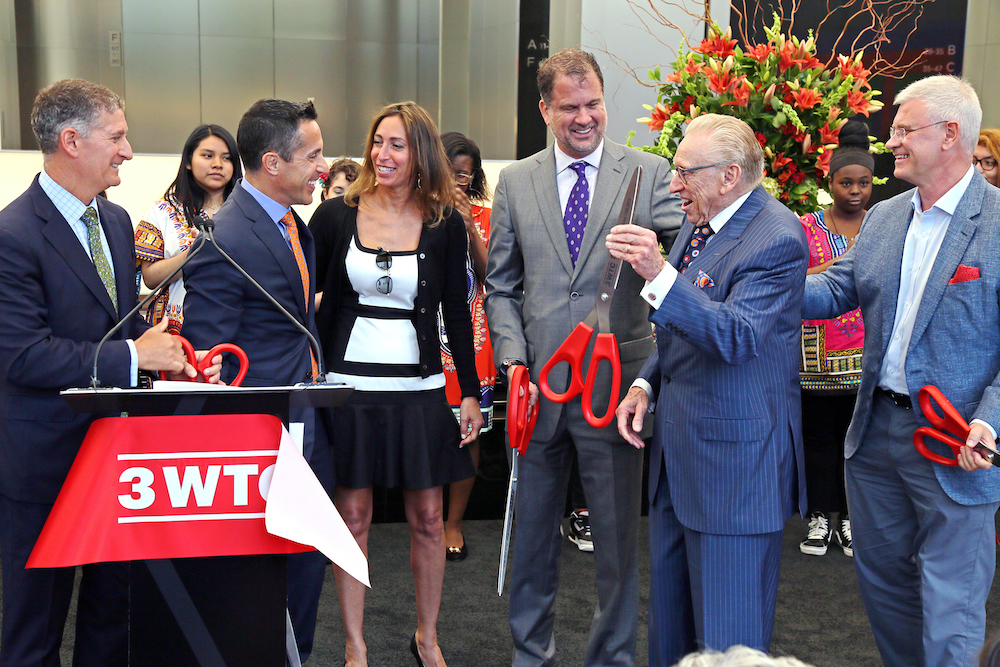 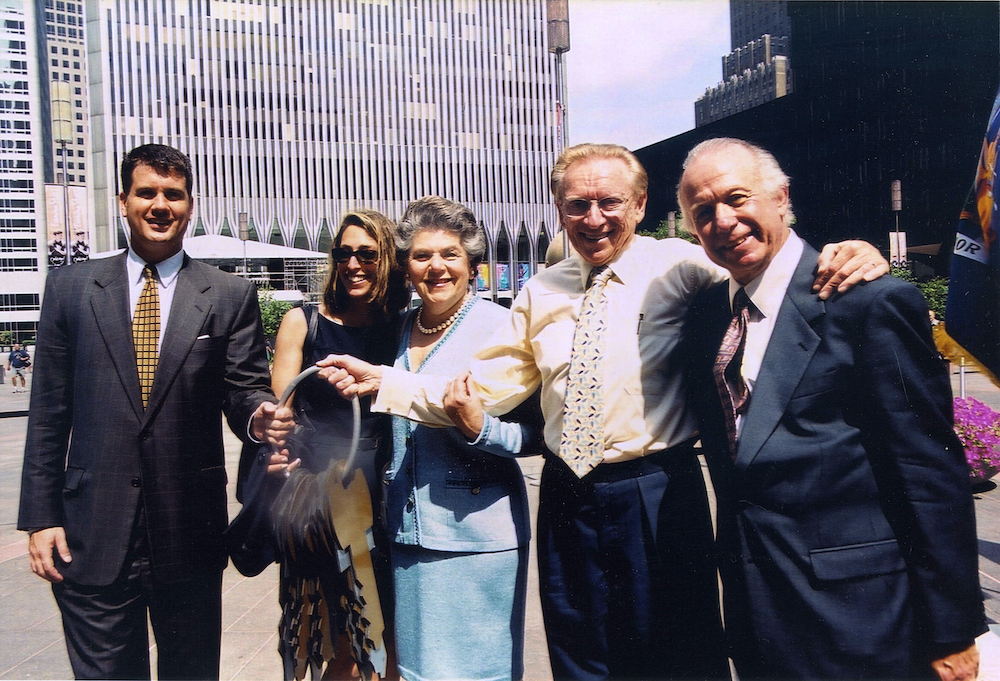 Roger, Lisa, Klara, Larry, and Lenny Boxer pose with the ceremonial keys to the World Trade Center on July 24, 2001.

NEW KID ON THE BLOCK

“When we bought the Twin Towers, this place was a ghost town,” Silverstein recalls. “After six o’clock, you could roll a bowling ball down Wall Street or any place you wanted.” But after watching the neighborhood evolve after 9/11—and after more than 30 years in the same Park Avenue apartment—Larry and his wife of 65 years, Klara, decided it was time for a change.

“Something that hit me very early on is that I wanted to own something. I wanted to be an owner.” 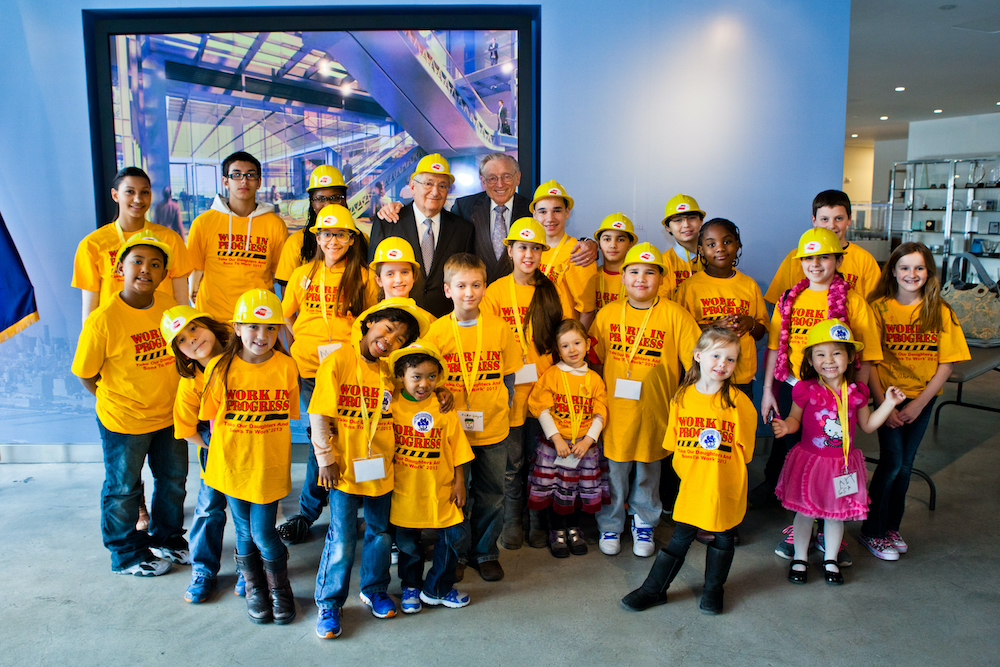 Larry Silverstein poses with the children of some of Silverstein Properties’ employees during “Take our daughters and sons to work day ” in 2013.

So, in 2018 they moved into a penthouse at 30 Park Place, one of his developments. The 82-story tower, designed by Robert A. M. Stern to look as if it could have been built a century ago, opened in 2016 and includes residences atop a Four Seasons hotel. “If you look far enough,” Silverstein jokes about the view from his 80th-floor terrace, “you can see the curvature of the earth.”

“Two things really tipped the scale in favor of moving down here,” he explains. “Number one: my grandson said, ‘Poppy, if you move down here, I’ll show you how to go to work by skateboard every morning. It’s two blocks, downhill, piece of cake.’” Number two was
the rejuvenated neighborhood. “It’s young, it’s vibrant, it’s enormously exciting. Should add ten years to our lives.” Downtown’s residential population has more than tripled since 9/11, and according to Silverstein, the area now has the highest work-live ratio in the country: 27 percent.

That ratio will soon tilt even more residential. Last February, the Port Authority awarded Silverstein—in partnership with Brookfield Properties and two other firms—the rights to build 5 World Trade Center on the site where the plagued Deutsche Bank building once stood. The sleek 900-foot-tall tower, designed by Kohn Pedersen Fox, will feature more than 1,300 residential units, a quarter of which will be set aside for households earning less than 50 percent of the neighborhood’s median income.

While significant obstacles to groundbreaking remain, so does Silverstein’s trademark eternal optimism. Not only will the new tower be a model of energy efficiency and sustainability, he says, but “the firms that take office space at the new World Trade Center will be able to house their employees in the same campus if they want to, which is pretty damn unique, right?” 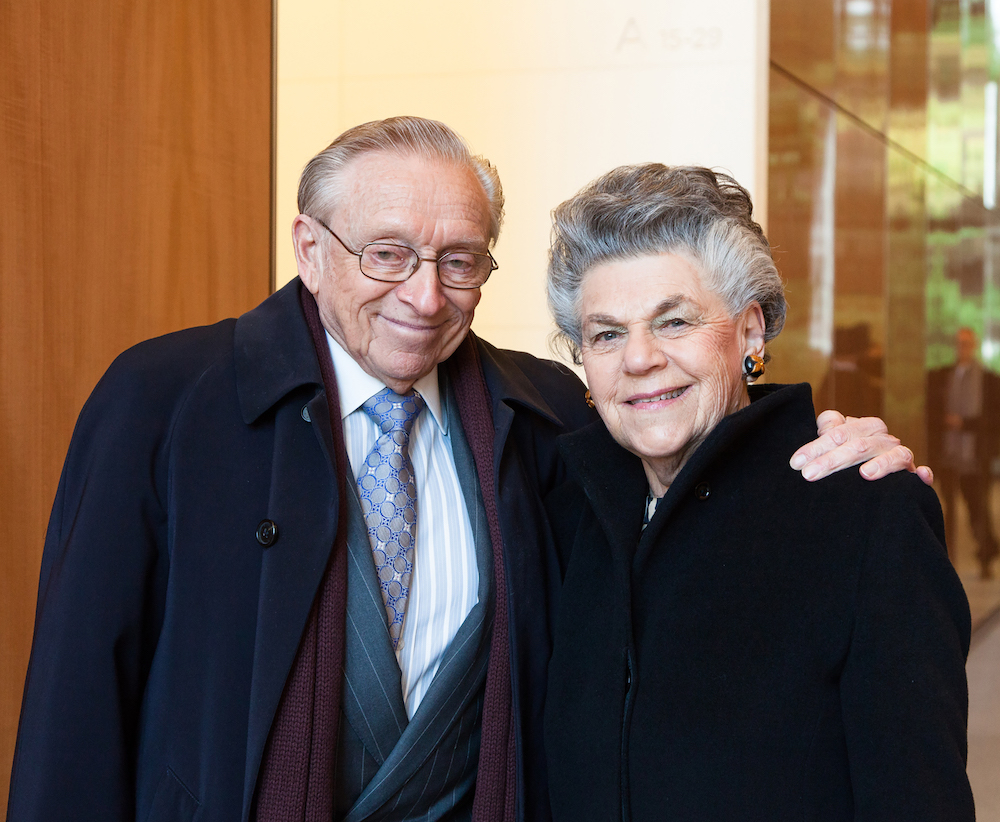 LOVE STORY: Larry and Klara Silverstein in the lobby of 4 World Trade Center.

Silverstein’s earliest memory of downtown is of the “extremely tall, very impressive buildings.” Little did he know he’d one day own one of them, 120 Broadway. Known as the Equitable Building, it became the biggest—if not the tallest— skyscraper in the world when it opened in 1915, occupying an entire city block between Cedar and Pine streets. It was so big that it spawned the city’s 1916 Zoning Resolution, which limited new construction to a percentage of lot size to ensure at least a modicum of sunlight could reach the surrounding canyons.

When Silverstein bought the landmarked building in 1980, many of its historic details had been neglected, if not concealed outright. “The previous owner had no feeling, no sensitivity to the importance of historic landmarks,” he recalls. “They hung acoustical drop ceilings without any kind of architectural detail at all. Added fluorescent lights and so forth. It was dreadful.” So, Silverstein immediately set about renovating it, carefully restoring such original details as the terra-cotta window frames and the lobby’s Tennessee-pink-marble floor, and vaulted, coffered ceiling with carved rosettes. “It makes such a difference,” he says. “Tenants appreciate what a detailed restoration can produce.”

Something tenants also appreciate, Silverstein says, is art. When he opened the original Seven World Trade Center, in 1987, he immediately realized he had a big problem on his hands. “I looked at the lobby, and I said to myself, I’ve gone crazy.” He explains that he had “fallen in love with” a particular carmen-red granite he’d personally selected from a Finnish quarry for the building’s façade.

They agreed the lobby could use some art to spruce it up, so they set about scouring the city for contemporary works large enough to adequately cover all that carmen-red granite. One of their first purchases was a fourteen-by- six-foot Roy Lichtenstein entablature. Works
by Frank Stella, Ross Bleckner, and Alexander Calder soon followed. “We ended up collecting a whole realm of first-class contemporary art,” he says. “That taught me something, that is art has a huge impact on people’s attitude towards buildings, a very positive attitude. It made an enormous difference.”

“We ended up collecting a whole realm of first-class contemporary art. Art has a huge impact on people’s attitudes towards buildings.” 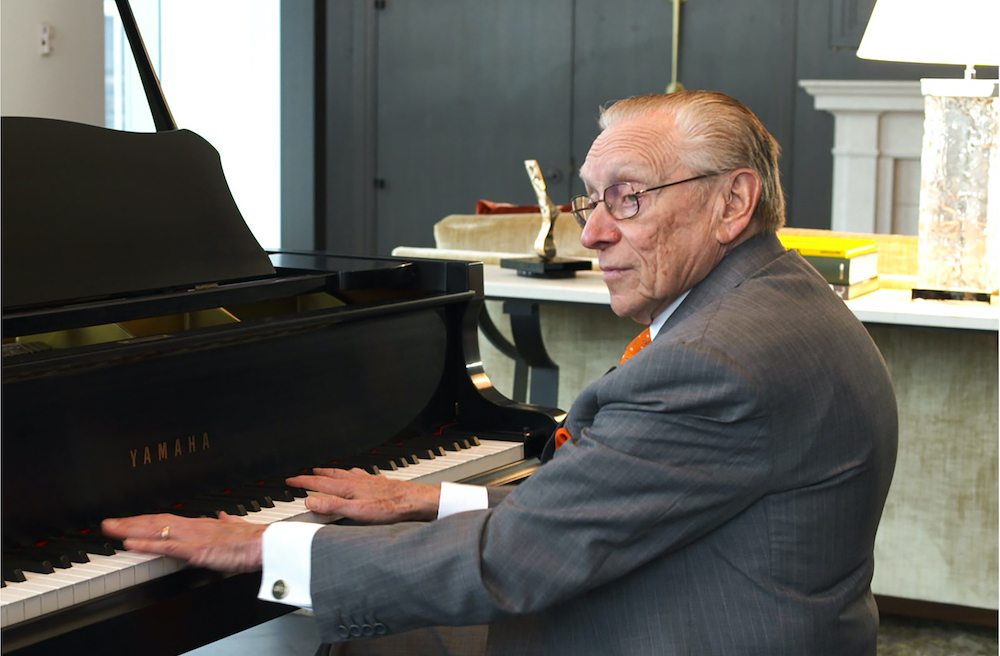 AT HOME: Larry Silverstein at the piano. 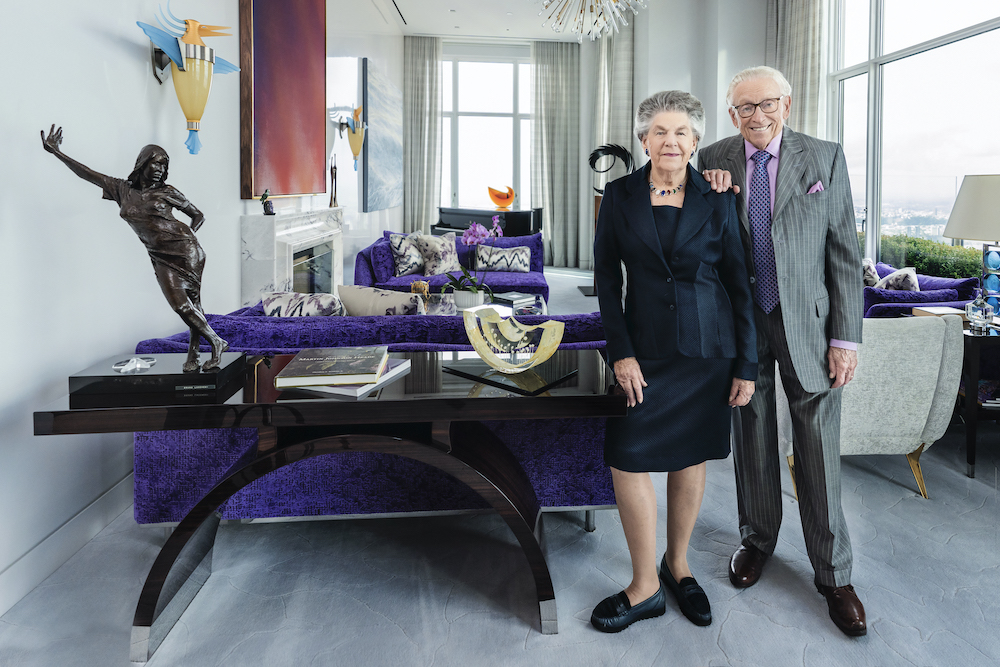 Larry with his wife Klara, in their apartment atop the Robert A.M. Stern designed 30 Park Place.

“Whether I’m still around or not, the Trade Center will be done. And what we will have put back is vastly superior, not just in terms of quality or architectural design. The parks, the neighborhood-totally transformed.”

Art plays a bigger role than ever in and around the new World Trade Center campus. Not only are there remarkable lobby installations, like Jenny Holzer’s “For 7 World Trade” and Kozo Nishino’s “Sky Memory,” Silverstein even hired street artists Stickymonger, Ben Angotti, and BoogieRez to paint the corrugated metal walls that sheathe the base of what will eventually become 2 World Trade Center, now an entrance to the transit hub.

“There’s been no shortage of naysayers all over again,” Silverstein replies when asked if he sees parallels between post-9/11 and post-pandemic downtown. “New York is done, finished. No one’s ever coming back. The office buildings are gonna be vacant. Fold up the tent and steal away into the night.” Not surprisingly, he’s as sanguine as he was after 9/11 about the potential for recovery after covid. “Will it be 100% back to the way it was? No, I don’t think so. But people will come back. Of course. It’s gonna happen. So much comes out of talking together around the water cooler.”

And what does he think downtown will look like in another 10 years? “Well, whether I’m still around or not, the Trade Center will
be done,” he says. “And what we will have put back is vastly superior, not just in terms of quality or architectural design. The parks, the neighborhood—totally transformed.”

“Buy corners” may have been the best professional lesson Harry Silverstein imparted to his son, but it’s this bit of wisdom that endures: “Whatever you do in your life, be truthful with people,” Harry told him. “And never equivocate.” Impeccable advice for an age where truth has become all too relative. DT