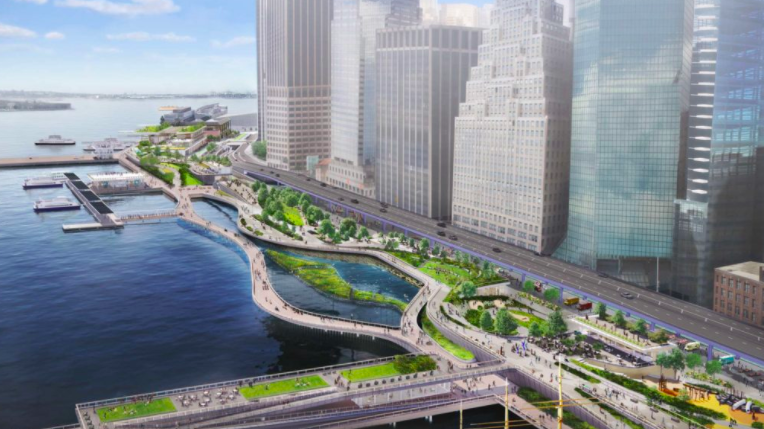 A new plan to protect Lower Manhattan from rising waters and the effects of climate change was unveiled last week, calling for flood walls, improved stormwater infrastructure, new open spaces, and a drastic reshaping of the shoreline.

The master plan from the Mayor’s Office of Climate Resiliency and New York City Economic Development Corporation aims to defend the one-mile stretch from the Brooklyn Bridge to the Battery from future storms like Superstorm Sandy and intense rainfall, like the soaking the city got from the remnants of Hurricane Ida last summer.

The plan would dramatically reshape the neighborhood’s relationship to the waterfront — adding more soft spaces to absorb water and extending the shoreline into the East River via a walkway. It calls for a multi-level construction that would add a water-level esplanade underneath the extended shoreline, where floodwalls would absorb waves from coastal storms. Piers and terminals for the NYC Ferry would also be reinforced.

The problem the plan is addressing is one that much of the borough, and the city, is facing in the climate crisis: Manhattan is made of hard surfaces, which give rain and floodwaters nowhere to go. The new plan would fix that via new stormwater pumps and green spaces that sponge up the water while creating coves to protect wildlife.

The project is expected to cost between $5 to $7 billion and would take an estimated 15 to 20 years to design and build. That’s already a tight timeline: according to the New York City Panel on Climate Change’s projections, rising tides have long been expected to flood Lower Manhattan on a monthly basis by the 2050s; in another 30 years after that, floods could become daily. Some frequent tidal flooding might occur as early as the 2040s, less than 20 years away.

This master plan is the last link in an overall Lower Manhattan Coastal Resiliency Strategy that has already proposed makeovers to shore up the rest of the tip of Manhattan. This particular stretch of neighborhood holds extra challenges because the built infrastructure — like subway tunnels, roads, and shipping ports — provides less green space and less wiggle room than other stretches of the waterfront.

The plan used input from the Climate Coalition for Lower Manhattan, which includes the Alliance for Downtown New York.