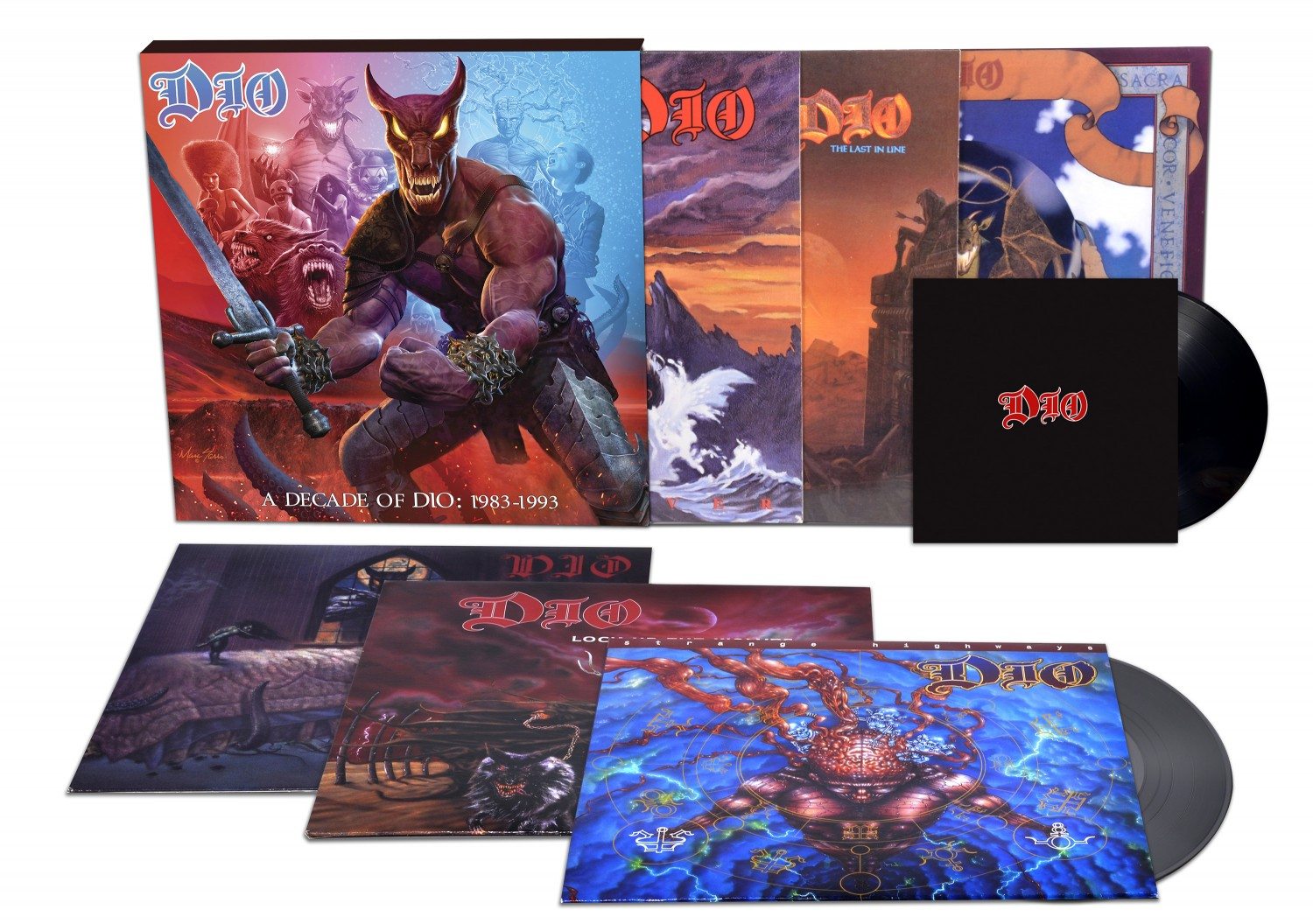 Over the past 30-plus years, Simon Wright has played with a good number of hard rock’s essential artists. After playing in some bands in his native Manchester, Simon wound up joining AC/DC in 1983 — he had responded to a simple local newspaper ad that sought a drummer for a rock band — at the age of 19. In the years since, he has been part of tours and/or recordings from Dio, UFO, Rhino Bucket, Europe’s John Norum, and the Michael Schenker Group. Presently, he is a member of the Queensryche-rooted Operation: Mindcrime and the official Dio tribute group known as Dio Disciples.

Beyond upcoming dates with the Dio Disciples, the legacy of Ronnie James Dio is being kept alive with the release of A Decade Of Dio: 1983-1993. Currently available on pre-order through Amazon, A Decade Of Dio will be released on CD on Jul. 22 and on vinyl on Oct. 4. Featuring the first six Dio releases, the box set includes remastered recordings and new artwork by Marc Sasso; the LP edition will also come with a bonus 7″ single featuring two rare recordings.

Simon Wright caught up with Downtown to talk about his career with Dio — which he first joined in 1989, following three albums with AC/DC — and plenty more. He keeps up a minor presence on Facebook, while the Dio Disciples are far more active on there. Meanwhile, the Ronnie James Dio Stand Up & Shout Cancer Fund can be followed at www.diocancerfund.org.

You’ve been the drummer in quite a few major bands. Is there one period of your career that you’re most proud of?

Simon Wright: I have been fortunate to have had some great experiences with AC/DC, Dio, UFO…but I find myself being proud of the musicians and techs around me when those incredible moments happen.

You had two tenures with Dio, and have been part of Dio-related recordings since Ronnie passed. Is there something you wish more people knew about Ronnie?

SW: A lot has been said about Ronnie but not much about his very dry smart humor. He was so quick with it sometimes and left me in stitches a lot of times. He was also great at crosswords, so fast.

Do you have a favorite recording from your Dio days?

SW: That’s difficult to pick a favorite. I enjoyed Magica for its concept and there were some great songs. Killing The Dragon was a bit rawer, also good songs. I thought the two live DVDs from London and New York turned out to be great representations of Ronnie’s stage presence and power and the band sounded tight, too.

You got your start very early, having joined AC/DC before you were 21. At what age was your first professional gig?

SW: If I can remember, I think I was 13 or 14, and it was at a rugby club in Manchester, where I’m from. Can’t remember how much we got, but I’m sure it all went on beer.

What inspired you to start playing drums in the first place? Was it a family member or a particular song you heard?

SW: Well, my father played snare drum a little before he started work, but not much after that. I used to see a lot of drummers on TV on a show called Top Of The Pops, and I would tap along on the arm of the chair and I was hooked. I managed to eventually get a small kit, added cymbals and would come home from school and try and learn from records. My mum and dad were very tolerant of the racket coming from my bedroom, I must say.

Were you the first person in your family to have visited the United States?

What do you remember about the first time you ever performed in New York City?

SW: I have good friends in New York and I have fond memories, very down to Earth peeps, and I can’t remember what date was the first time I was there. But it’s a great place, and I’m looking forward to going back soon.

Is playing a show at Madison Square Garden really as great as it’s said to be?

SW: It’s a great old rock & roll venue. I must have played it about six or seven times. The union rules were new to me when I first played there, not like most venues I guess, but still a landmark and historical building.

Any idea when we’ll next see you playing drums in New York?

SW: Well, I just played at Gramercy Theater with Operation: Mindcrime back in March. Hopefully again before the end of the year.

You’re most associated with hard rock. Were you ever a drummer in a jazz or pop-oriented project?

SW: Well, there are some sessions that I do where I have to change my style a little, still in the rock vein though, but mostly lately it’s more progressive rock, which I’m beginning to enjoy more. Some of the Queensryche songs I had to learn were very challenging, and you really had to hone in on certain parts and listen hard and pick out what was going on.

Did you ever have aspirations to be a songwriter or at the front of the stage?

SW: Not really. I prefer to help write songs in my home studio, at rehearsal or at a studio we’re recording at. I leave the front of the stage to the other guys. Or girl. (laughs)

Aside from this new Dio box set, what’s coming up for you?

SW: We have Dio Disciples shows in Europe, Germany and Hungary this August, which I am looking forward to. Then October with Mindcrime, although that is not confirmed yet. It’s especially good when we get together as Disciples, sometimes it is difficult because of everyone’s schedules, but there should be more coming up in the future.

SW: Mostly doing online interviews. (laughs) No, I enjoy going out to dinner with my beautiful girlfriend, reading and I enjoy my garden. Being an Englishman, it’s tradition, right?

Right. As an American transplant, how often are you back in England? Does the Brexit situation affect you directly?

SW: Not as often as I would like. The Brexit situation I don’t think will affect me, but I’m keeping an eye on things. Let’s see what pans out. Might be a good thing but it will take some time, I think.

Finally, Simon, any last words for the kids?

SW: Well, we get youngsters and not-so-youngsters at a lot of shows, which is great, so I’ll wish everybody well. Thanks for all of your support and continued support, because without you guys there would be no show. We rock. All the best.