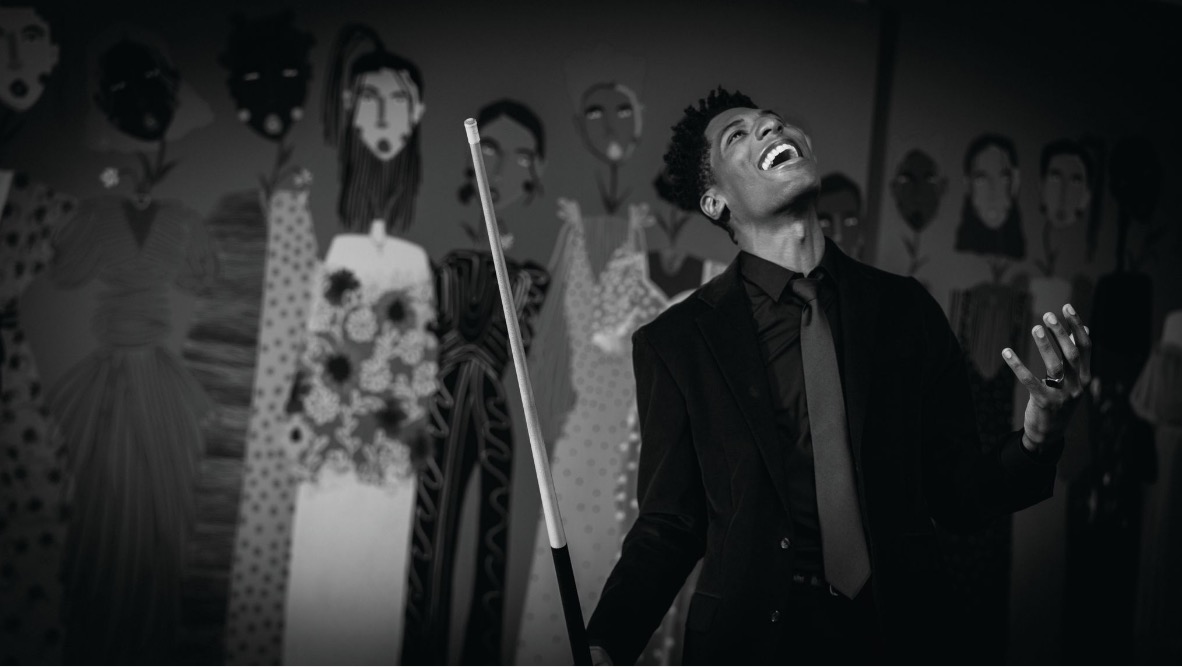 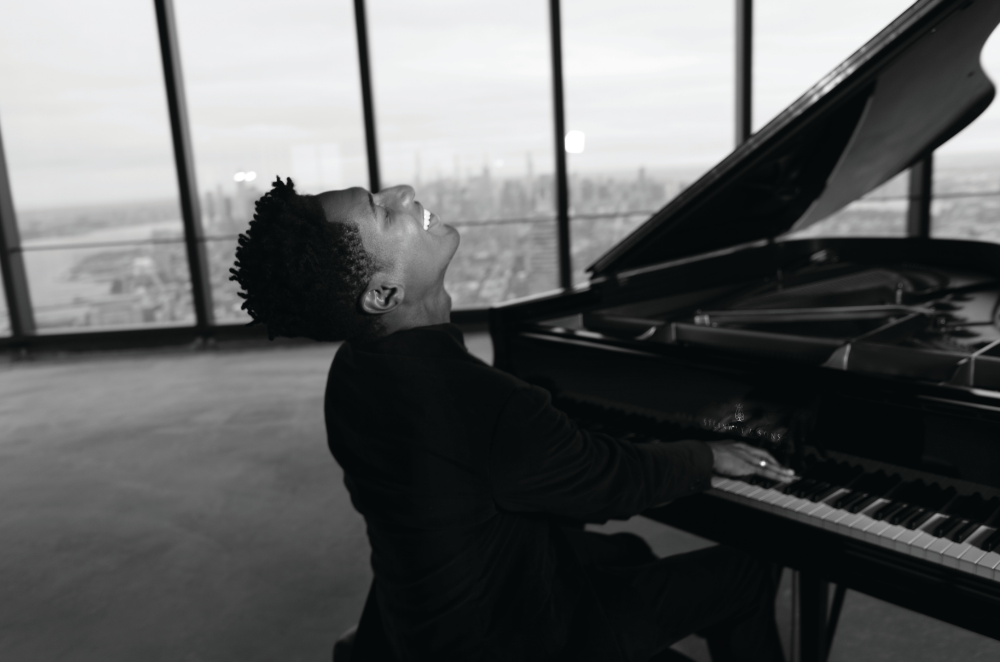 KEY OF LIFE Jon Batiste gives an impromptu concert on a Steinway & Sons baby grand piano, looking out over the city from the 79th floor of 3 World Trade Center.


Batiste stands in front of “Akoma,” a mural by artist Georgie Nakima, in 3 World Trade Center. He is wearing a Coach X Jean-Michel Basquiat trench coat.

IN A CAVERNOUS SPACE ON THE 79TH FLOOR of 3 World Trade Center, a tall, Black man summons glorious sounds from a baby grand piano, surrounded by endless views of Manhattan. He is full of kinetic energy, sometimes standing, sometimes sitting, shoes off, feet working the pedals, hands in motion, jumping from classical themes to jazz riffs to popular songs in a seamless flow of Music, with a capital M. This is Jon Batiste.

He arrives at our photoshoot tossing a tennis ball and sporting a jacket decorated with a Jimmy Carter campaign button. He radiates joy, and the personal soundtrack playing in his head spills out in phrases, snippets of songs, mischievous looks, inside jokes. Then the music goes on and it’s Billy Joel’s New York State of Mind. “Oh, that sax, Billy!” Batiste sings a little, plays air guitar on a pool cue, toggles between Rat Pack cool cat and exuberant man-child: “YEAH!” he shouts as Billy sings. He shares that he is really into Elton John lately, and we agree that Elton looks so happy with his family. “He’s at peace,” Batiste says. “It’s what we all want.”

“It must have been The Itsy, Bitsy Spider.”

Batiste’s musical timeline threads back through several generations. He is part of the legendary New Orleans Batiste family of jazz musicians. There is a pool table at our shoot and he shares that his dad became something of a pool sharp while touring on the Chitlin’ Circuit, where there was always a pool table to fool around with between sets. He knows a great deal about music history because his family helped write it. His first cogent musical memory is of being pushed on stage during the filming of a commercial. “I must have been around seven or eight, and I believe it was for a concert, a performance that my family was doing in Japan. I was asked to sing a nursery rhyme. It must have been The Itsy, Bitsy Spider.” Was he a natural? “I remember having such intense stage fright and going through many different takes. Fast forward 25 years later, and I’m on TV.”

Yes, he is. The Late Show with Stephen Colbert just recently celebrated its 1,000th show, and Batiste has been the show’s bandleader, with his band Stay Human, from the start. So, he has a day job that involves an intense schedule of composing music for the show, rehearsing, and taping—all complicated by a global pandemic. And while that would be a full slate for some, it’s just the tip of the iceberg for Batiste. He recently completed scoring, and collaborating on a Christmas Day Pixar release called Soul: “I put so much of myself in the film, it’s emotional to see this character’s essence in his story, and the things that are happening in his world draw so much from my personal experience in New York.”

He has written a symphony that is scheduled to be performed next year at Carnegie Hall, where he will be the artist in residence. He says, “If you think about Beethoven, well, his Seventh Symphony is the one. The seventh one. Writing a symphony takes so much of yourself, so I wanted to start taking a swing at it at age 31 or 32 when I started it.” This year, he also received two Grammy nominations, and he is always working on new music. A body in motion, to the beat of his own internal soundtrack. And what does all of this sound like?

“It sounds like transition, evolution, growth, and leadership. It’s been quite a journey. If you look at the things that have happened over the last five or six years in my life: graduating from Juilliard and going on the road; doing television; writing plays and musicals; releasing albums; and all of the different awards and all of the people that I’ve met…” He pauses and then continues, “Now I feel like I’m at a stage where I’ve become a leader. And I’ve always, innately, felt like a leader and wanted to show people a better way. But now it has evolved into a very tangible state. I feel like I can see how my position in the world is meant to be facilitated, how it’s meant to be enacted.”

He’s grateful for the experience of working on The Late Show. “When you have something that you do five days a week for over five years, the consistency gives you perspective in a way that nothing else can. And I think that doing something like that is a blessing for me because if I didn’t have that, I don’t know if I would recognize this point in my evolution.”

It has always been a way to bridge the gap and connect.

Music isn’t only entertainment for Batiste. During the Black Lives Matter protests this summer he performed for the crowd at Barclay’s Center, and on election day he shared his particular brand of love and inspiration for people going to the polls in Philadelphia. He says, “Music is a gift because it can touch people and they don’t have to know why or how. It has always been a way to bridge the gap and connect. All of the different times that I’ve experienced really transformational life moments, there’s been some sort of music involved. Whether it’s through the form of tradition or whether it’s ritualistic, whether it’s worship, or whether it’s just nostalgia, there’s always some sort of soundtrack.”

This year, he collected two more nominations: Best Contemporary Instrumental Album for Chronology of a Dream: Live at the Village Vanguard; and Best New Age Album for Meditations.

“The intention of something is always felt at a higher frequency when it’s about something bigger than oneself, and that’s across the board.” — Jon Batiste

Does he miss the live performance? “I miss performing in front of people, but I will say that I am enjoying thinking of different ways of presenting music, even in the virtual environment, because I think it’s more like being a movie producer now. I’ve always been into creating visual worlds and thought at some point that I would get into film as a director. But it takes a different muscle. And I don’t think a lot of musicians want to deal with that stuff.

So, the musician side of me is sick of it, and I just want to be able to go and play a show in front of people, even if it’s in my house. But the director side of me is having fun experimenting.”

He thinks the limits posed by COVID-19 offer a reset button for the way we experience music. “Music—before it was
put into the context of selling products and scaled so that it could be a commodity—was a part of the fabric of everyday life. It was something that people used to entertain themselves, in their home, in community gatherings, rituals, and cultural traditions, dating back to African tribes and drum circles or rumba sessions in Cuba. In New Orleans today, we have the second line in funerals. Social music is what I call it.”

He says, “I believe social music is really what we’ve always been primed for. People’s relationship to music is inherently social, and when it’s made into a commodity it skews that relationship. We lose something essential. Even with the protests that I’ve been doing, and in all of the different ways that I see music being made now remotely and online, it’s going back to a more social context, playing in small groups where the presentation is more geared to smaller community gatherings.”

I feel the responsibility to my family and my lineage.

He is conscious of his role as a leader. “I think about the different lineages that I’m a part of. Both New Orleans musicians, and all of the different styles of music and culture that I’ve drawn from, and I think about my great-great-uncle who fought in World War II, and my grandfather who was in the Korean War, and my uncle and my cousins who were in Vietnam. I think about the range of sacrifice that has allowed me to be a financially independent, successful Black entrepreneur, musician, artist. Apart from what I think the role of a musician is in society, I feel the responsibility to my family and my lineage.

Art doesn’t always have to be for a cause or to raise awareness. But I do think that for me, the intention of something is always felt at a higher frequency when it’s about something bigger than oneself, and that’s across the board.”