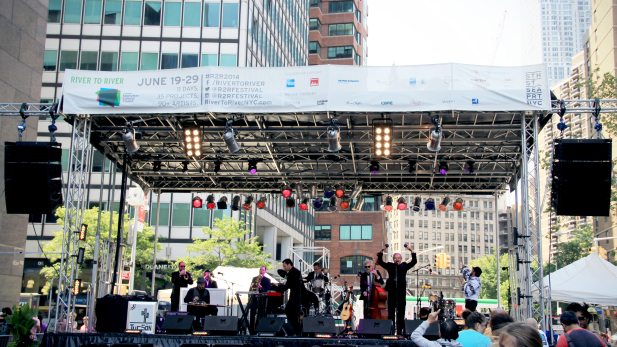 River 2 River returns to downtown Manhattan beginning on June 18 until June 28. The various events are located at numerous outdoor venues and include dance performances, theatre, music, film, and much more. These free events are open to the public and welcome New Yorkers to explore their artistic side while enjoying the festival. Don’t forget to check out their website for up-to-date information because all events are subject to change due to weather. Read the full schedule below!

River 2 River bash goers are gathering on the North End Way to kick off the festival “block party” style. Participants can enjoy discounts at local restaurants and retailers with performances by East African vocalist, Somi, and many more activities.

Celebrate the time period of extremes with Public Intervention & Performance who are presenting a snapshot of the social, political and artistic changes during the ’80s and ’90s. The exhibition is showcasing society’s response to the HIV/AIDS crisis, civil rights violations and the new media influence through public art, intervention and performance specifically downtown. Artists and their works, such as Richard Serra’s Tilted Arc and T.W.U and Keither Haring’s drawings were also supported during this time.

Court/Garden is a dance performance with live music by a canary torsi, which takes its inspiration from the imperial ballets of Louis XIV’s French Court. Performed on the proscenium stage and the demonstration of video feeds as cultural, social and political frames of experience.

Rachel Tess’s Souvenir Undone is an ongoing dance project that focuses on the relationship between architecture and choreography and choreographer and audience. During the dance, performers will move to the noises and sounds of the city and adapt the choreography to the site using constructed modules to move the existing architecture.

The One Hundreds
June 20 at 7 p.m.
Nelson A. Rockefeller Park (Battery Park City)
Co-presented with The Joyce Theater

Choreographer Twyla Tharp’s ensemble will be performing her seminal work to celebrate 50 years of her choreography. The One Hundreds (premiered August 1, 1970) blends math, movement and public participation.

Bang On A Can
June 21 at 12-10 p.m.
Winter Garden, Brookfield Place
Co-presented with Arts Brookfield

Bang On A Can Marathon will feature 10 hours of rare performances by innovation musicians and up and coming young artists. This super-mix of music comes from locals and from musicians from around the world!

The Trisha Brown Dance Company will perform Trisha Brown: In Plain Site using select material from the dance company’s extensive collection and entwine it together with the beauty of Robert F. Wagner Park to create a site-specific performance. Viewers will be able to experience Brown’s work from a new perspective that will bring them closer to the dancers creating a more personal experience for the audience with Brown’s most impressive work.

These Are Bodies, These Are Motions, This is The Place
June 21 at 1 p.m. and 4 p.m.
Governors Island: St. Cornelius Chapel

Performers Rachel Tess and Beniot Lachambre dance in a landscape of palpable textures. As bodies become canvas’ and abstracted, the audience plays an important role in their performance as the dancers change positions from lying, sitting and moving to different places as the audience shifts around the space.

Eiko Otake presents her first solo project, A Body in Places, is motivated by the need to explore non-traditional venues and to respond to the characteristics of each specific place. This dance performance is inspired by the history and tradition of traveling musicians, poets and actors who perform from town to town.

Co-presented with New Amsterdam Records, Olga Bell’s Krai (Russian word for edge, limit, frontier or hinterland) is a music performance dedicated to the wilderness, towns, and inhabitants and their stories. It presents a 40 minute journey across the Eurasian landmass. The performance features Olga along with five other vocalists singing in Russian, aided by electro-acoustic chamber ensemble of cello, electric guitar, bass, pitched drums, mallet percussion and electronics.

Artists, partners and audiences are gathering at Vbar Seaport to come together to socialize, dance, and experience after-hours programming and discussing the River to River offering they’ve had during the day. LMCC Workspace artists-in-residence, Can-D (Amy Khoshbin) and Drella (Raja Feather Kelly) will host and perform a night of entertainment influenced by media and celebrity culture that will feature pop-culture, contemporary dance and more.

Choreographers Wally Cardona and Jennifer Lacey present the 8-part dance series, The Set Up, feauring an international assembly of 8 master dance-artists of a traditional format. Saya Lei, a 70-year-old master who has devoted his life to preserving the Mandalay-style of Burmese classical dance will be a part of the sixth installment of the performance which began in Mandalay, Myanmar.

In the dance performance, White, Michelle Boulé explores what choreography means and its connection to the body in space and time. The inspiration came from when Boule first asked herself if movement, like sound, could be perceived and transmitted across space with an invisible, yet perceivable resonance. It will be performed to the beat of the city, with audiences playing a key role in the experience.

Roomful of Teeth, founded by Brad Wells, is a Grammy-award winning vocal project that is dedicated to mining the expressive potential of the human voice. The 8 person group is continuously growing its vocabulary of singing techniques which includes Tuvan throat singing, yodeling and belting plus many more. Roomful of Teeth will perform a concert featuring a selection of songs from their album, Render, perform composer Wally Gunn’s The Ascendant and showcase Caroline Shaw’s music, film and theater video installation, Ritornello.

Governors Island: Arts Center
Performance artist, John Kelly, is performing his Obie Award winning work, Love of a Poet, which features music, movement, film and visual art combined and built around Robert Shumann’s ‘ Dichterliebe’ of 1840. Kelly will be singing in his signature countertenor voice, portraying a lovesick poet hiding from society as natural elements and personal demons haunt him.

Located at the Poets House, the 23rd annual Poets House Showcase will be showcasing new poetry and poetry-related texts published in the U.S. in a single year by more than 650 commercial, university and independent presses. It will have volumes by independent authors, anthologies, chapbooks, biographies and many more.

Fall Of The Rebel Angels: X, created by Catherine Galasso, is an interdisciplinary dance and theater performance that is partly inspired by the Baroque painter Peter Paul Rubens. Ruben’s painting will be used as thematic scaffolding, with the project investigating visceral physicality, sensuality and the spectacular.

Brought to River2River by French Choreographer Emmanuelle Hyunh, Cribles/Wild Governors is an ongoing series of site-specific and community-focused performances under the umbrella Cribles. The titles and movements will be changing according to the dance’s community and locations. In Cribles/Wild Governors, NYC dancers will formulate a circle, linking hands to demonstrate that the community is inseparable from the individuals who comprise it.

This multi-genre event, audiences are invited to meet and engage with 20 Process Space artists-in-residence. Attendees will have the opportunity to look at the developing and completed projects of artists working in visual, literary, and performing arts.

Music from Mali, Venezuela, the Balkans + Beyond
June 27 at 5 p.m.
Seaport District: Fulton and Water Street

Two international renowned choreographers, Eiko and Emmanuelle, will hold a discussion touching on topics such as those who have influenced their work, their challenges and inspirations, as well as their identities as Vietnamese/French and Japanese/American women.

A discussion focusing on Cardona and Bepler’s processes and inspiration that led to The Set Up as well as Yamauchi’s participation in their process of “discussing/doing/dancing” and investigating how The Set Up and its creators are “undoing tendencies toward certainty in art”.

For further information on the performances and events, please visit http://lmcc.net.