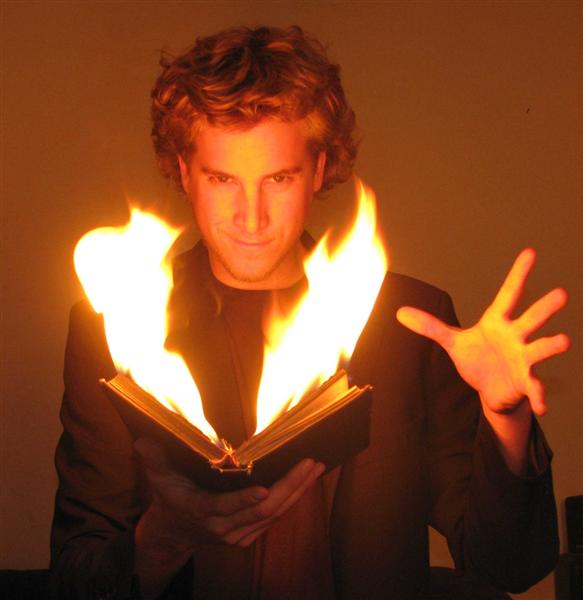 In 2011, magician and illusionist Matias Letelier followed the love of his life and now wife, Marlana to the United States.

Her “souvenir from Chile”, as he calls himself, Matias became a proponent of the American dream. Since then, he has been practicing magic for 23 years, professionally since 2005.

Today, Matias is known as one of the most elite magicians in the country, and you can be a part of the magic, right here in NYC. 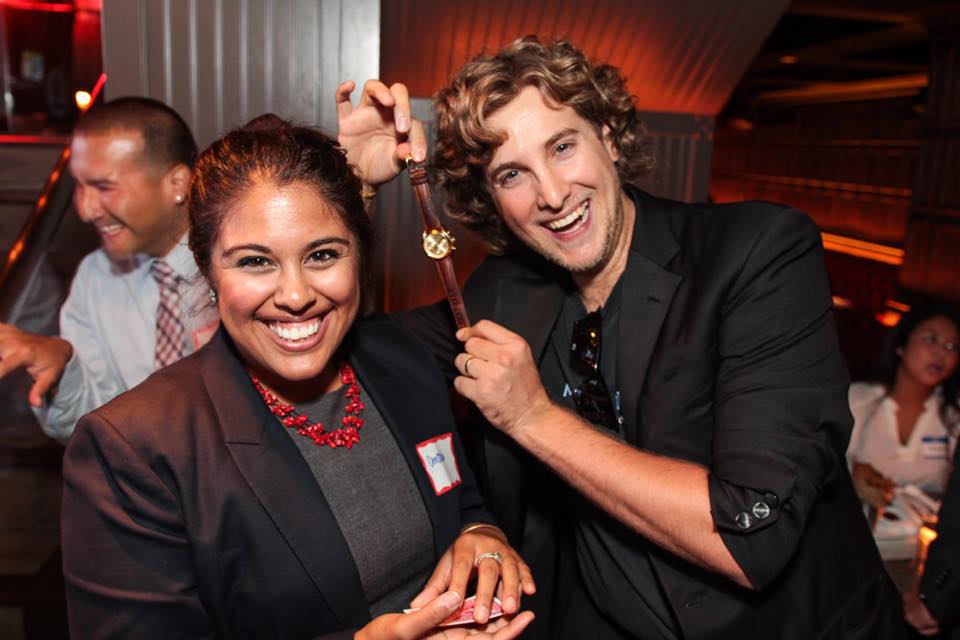 Matias Performing at one of his “Pick Pocket” events

Matias Letelier’s story of getting involved in magic is a divine one. It began with an inherited magic library and has manifested into his career. Matias enlightens us with the fact that the practice of magic by showing it has meaning and spirituality, with deep roots and religious ties.

He now shares his talents with New York City, as the city’s resident magician, brimming with Infectious charisma, charm, and friendliness. As a dedicated man to his craft, Matias did not stop amid the pandemic. He put smiles back on faces and put the awe back into people’s hearts with his Zoom magic sessions.

Our very own Grace A. Capobianco recently paid a visit to Matias’s show, “Speakeasy Magick” at the McKittrick Hotel, and decided his story – and his talents – shan’t go unshared. 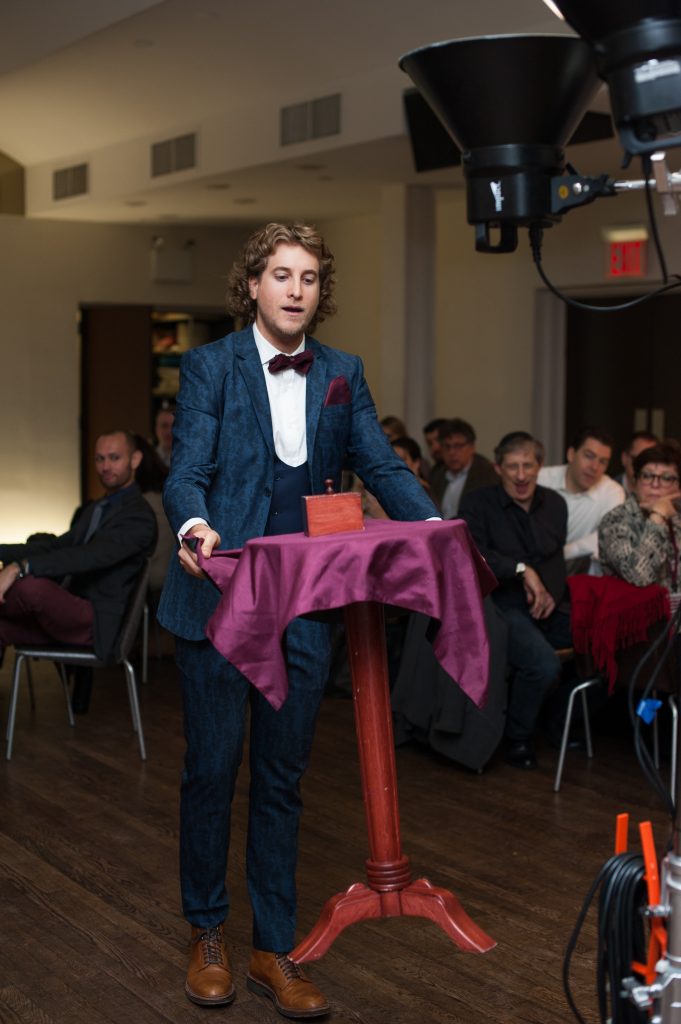 Downtown: What inspired you to become an illusionist & mentalist?

Matias Letelier: I never, ever, ever, thought about pursuing magic as a career. But while I was studying business, there were 4 elements that inspired me to become an illusionist & mentalist:

1) I inherited a magic library from my uncle who suffered an accident and passed away in 2004. He was a businessman but also an extremely talented magician (he did it as a hobby). Imagine myself getting so many magic books!

2) After his accident, every time I performed for his daughter (who was 3 by then) she would “see” her dad and invited him to join the show. It was crazy, and my grandmother and mom (who are fervent Christians) told me it was almost like a miracle! So I started doing a trick in his memory in every show… and thought about continuing his legacy.

3)  Along with my friends at the Business school, spending 2 weeks each summer and winter in lower-income areas of our country helping them fix their houses, and then in the afternoon, we would teach them about marketing, finance, accountability, and other business skills. Then in the late afternoon, we would have some fun activities and I was in charge of the entertainment for being a magician. The shows were very simple but with so much heart that people were super excited. This is where I learned that I had a way to connect with people which made them feel happy.

4) Finally, at the business school one of my teachers told me “you should mix your passion/hobby with marketing… then you’ll have a unique business”. I thought to myself “I have the passion, the magic skills, and marketing knowledge, and most importantly, I have the story of my uncle… maybe I should do magic for a living”… 16 years after, here I am. I’m so happy and thankful for all the many blessings I’ve received so far.

DT: What is the difference between magic, and illusionism?

ML: For me, there are magicians and illusionists. Magicians were the real deal in ancient times. But they have nothing to do with the modern illusionist. While magicians were pursuing the enlightenment or spiritual connection with the divinity (God, samadhi, Heaven, etc), the illusionist tried to create the “illusion” that they were able to do the same as these magicians. For example, an ancient magician would have the ability to “read” someone’s mind and body and know exactly what was happening with them. Then they will recommend a course of action. On the other side, mentalists (which is an area in illusionism), do a few tricks to pretend they can read someone’s mind, just to reveal the number you were thinking of or the name of a loved one. In other words, magic was meant to achieve a higher state of consciousness associated with your spiritual life, while illusionists just try to entertain you.

DT: Can you tell us a bit about your performance styles and what kind of events you cover?

ML: My performance style includes strolling close-up magic and stage performances with big illusions. Although in recent years I’ve started incorporating many elements from mentalism. And I’ve done it all: private yachts in the Caribbean, cruise ships, big theaters, small theaters, clubs, hotels, private events, and corporate events all over the world.

DT: What do your performances entail? Which “trick” is the biggest crowd-pleaser?

ML: I focus on high energy and interactions. For me, the most important part is to connect with the audience. I usually become friends with my audience (even in a 10 min routine), and then it feels like I’m a friend showing them some secret skills. I have a  very warm approach to the audience, more so than other magicians, this is a great benefit.

DT: It appears that you can speak four languages: native Spanish, fluent English, medium Portuguese, and basic French. Does that ever come in handy when practicing magic?

ML: Not so much when practicing, but definitely when performing. Many times I have international audiences, clients will book me because they know that I can speak different languages. People feel much more comfortable when I speak their language. Besides, it’s fun for me and they enjoy the extra effort, when I pronounce the words correctly. Even though I might not be able to do a full show in French, the fact that I can do a few tricks and communicate with them, shows them I care. People care about you when you show them that you truly care about them and make the effort.

DT: What gets you the most excited about performing?

ML: I don’t smoke, I don’t do drugs, I don’t drink. Seriously. But when I’m out performing I get a “magicians’ high”. My wife says it is because I perform with passion. I’m not focusing on the clock. I’m just out there enjoying myself, getting to know new people, learning from their stories, and sharing some magic. It makes me so happy, and I feel my audience feed off of that energy the same way I feed on their reactions and energy. To experience that is one of my favorite and exciting things during my preformance.

DT: You base your work mostly out of New York City. Where is your favorite spot to perform?

ML: Even though I’ve been lucky to bring my magic all over the world, my favorite spot in NY is Speakeasy Magick at the famous McKittrick Hotel. Todd Robbins invited me to be part of this along with the best magicians in NYC – and I’m not telling you this because I’m part of the show – but this is without a doubt, the best magic show in NYC. Why? Because we created a unique experience that happens right in front of you, in the club car at the McKittrick Hotel, a place that is so cool that you have to experience it to see what everyone is talking about. This show always puts a smile on my face, plus everyone behind the show, including all the amazing performers, and staff, are simply the best.

DT: What do you love most about NYC?

ML: Do we have time? (laugh). So many things. The diversity of cultures, all the entertainment options, the great restaurants, the social life, the fact that the different social classes mix in every block, all the activities happening in every corner no matter where you are, Speakeasy Magick, and, of course, from here you can travel anywhere in the world. I mean, how can you not love this city?