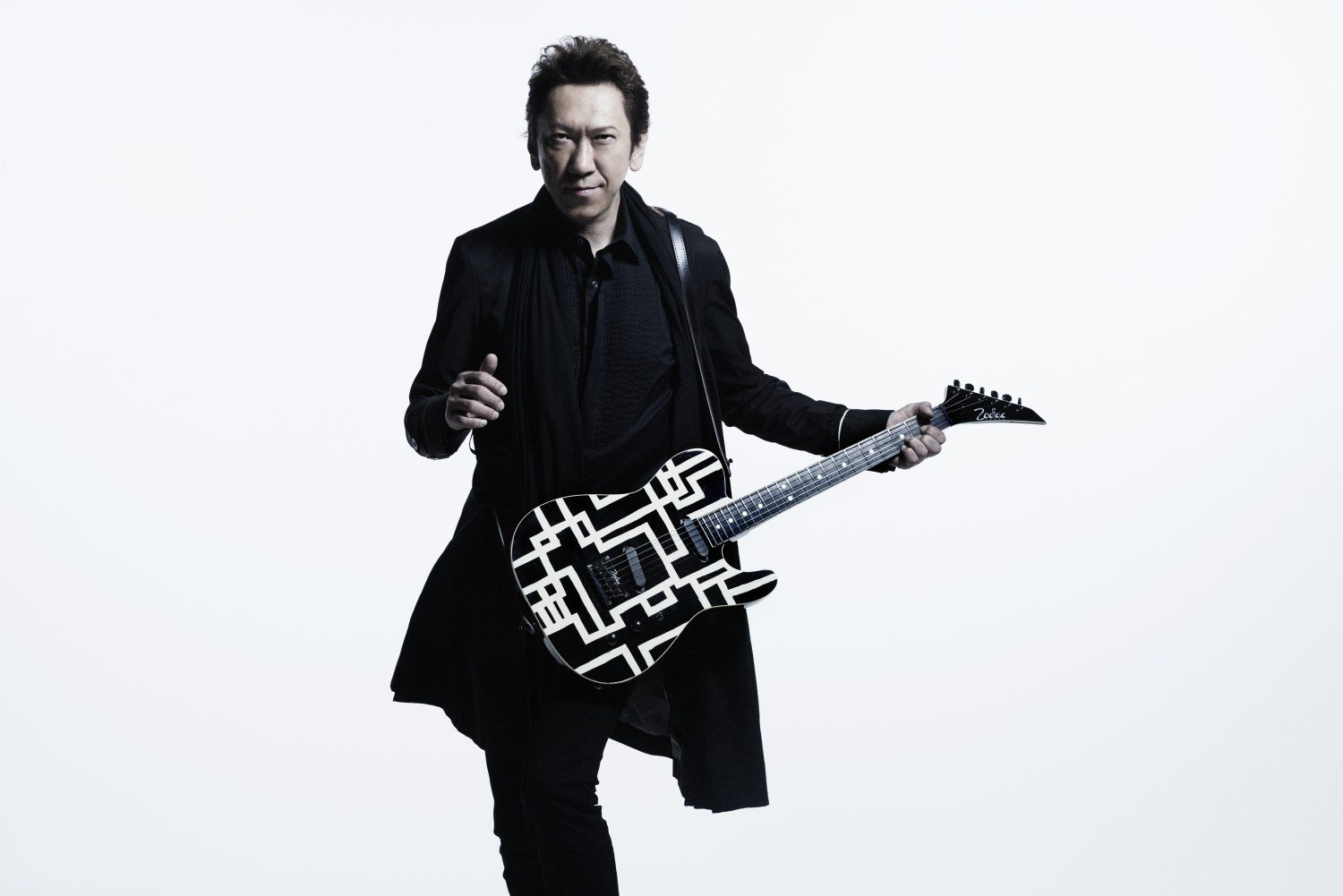 Tomoyasu Hotei — also known as HOTEI — is one of the most famous guitarists to hail from Japan. He has sold over 40 million albums in his 30-plus year career, and you undoubtedly know his song “Battle Without Honor Or Humanity.” But HOTEI continually challenges himself as an artist, and his 2015 album Strangers was only his second-ever English-language release; the album features contributions from Iggy Pop, Shea Seger and members of Rammstein, Bullet For My Valentine, and Apollo 440. He is also known to challenge himself off-stage, having uprooted his life in recent years with a permanent move to England.

Downtown had the pleasure of conducting Q&A with HOTEI about many facets of his life and career. HOTEI can be visited online at www.hotei.com, and can also be followed via Twitter and Facebook.

Strangers is your first international release, after being a very successful artist in Japan for decades. Where did the decision come from to break into the United States market?

HOTEI: One word: “adventure.” When I first held an electric guitar in my hand, I dreamt myself touring all over the world on a private jet, just like those rock stars you find in rock magazines! (laughs) That ambition does not fade just because I was successful in Japan. Time flies and this year marked 35th anniversary as professional musician. I questioned myself, “Am I still that same boy at over the age of 50?” I would be a con artist if I gave up my ambition from that moment when my messages to audience is always, “Life is short, be yourself and don’t regret.”

I thought it is not too late to follow my dream. I sold my property in Tokyo — I had a nice swimming pool with that property — and Bentley five years ago to relocate to London to reset my life. I wanted to challenge myself from ground zero. It took two years to complete Strangers with various U.K. producers. Have done some gigs in Europe, then I felt I am ready to check out U.S. market. I know it is not easy, but I’m all excited. I have confidence in my music.

On Strangers, you collaborated with Iggy Pop, Shea Seger, and members of Apollo 440, Bullet For My Valentine, and Rammstein. Are these all people that you had known? Or did you have a list of ideal collaborators that you approached?

H: As for Iggy, I met him in Berlin Airport when he came back from his show in Tokyo, and I was there for my recording in 1985. When I realized Iggy was there, needless to say I was all excited! He was one of my heroes, next to David Bowie. I was debating whether to walk up to him or not to ask for his autograph, when he approached me and asked me, “You are a famous guitarist from Japan, aren’t you? My girlfriend is a huge fan, would you mind giving me your autograph?” When I finished with demos of “Walking Through the Night” and “How The Cookie Crumbles,” I really wanted vocals with strong personality. Through my friend, I sent those demos to Iggy via Don Was to see if he would be interested. Fortunately, he totally loved them.

When I went to Miami for his vocal recording, I mentioned about the story from Berlin Airport, then he said “Oh! that was you!” Thrilled to know he remembered that moment! And Noko from Apollo 440 is my old friend for over 20 years. We share the exact same birthdate. He is my musical partner, feels like part of myself. Matt Tuck and Richard Z Kruspe — I met them through the producer. Shea is my friend in London. They are all amazing artists. We collaborated not just on music but shared more in the depth. I truly appreciated them all for their friendship.

Do you have plans to tour the United States again in support of Strangers?

H: Of course! I had an amazing experience in New York and Los Angeles this year. I’m dying to return in 2017! Also, I want to try other cities as well. I thought the audiences in the U.S. were amazing! I think they know how to enjoy music really well.

In 2013 you played at the Highline Ballroom, and you played there again a few months ago. Was your first time playing live in New York in 2013?

H: Yes. When I first played there, I had this prejudice that I had to sing in English. However, after that first show in New York, I learned it is not the language…with music I’m communicating with audience. I was truly appreciative of so many Japanese fans came to see me there. It was a huge relief moment.

Besides touring, have you spent time in New York City? Do you have a favorite restaurant over here?

H: I have a long-time friend in New York who is managing my schedule while I’m there. Where is the best steak restaurant, newest ramen shop, etc., so I don’t need to open a guidebook. I no longer have energy to go “clubbing” all night, and the size of steak in the U.S. is too big for me, so mainly I enjoy jogging in New York! (laughs)

So you and your family live in London. What inspired you to move to England?

H: I got bored with my life in Tokyo. I think Tokyo is the safest city in the world, everything is well-organized, very comfortable. But now I feel it is too much sometimes. I am quite tall for a Japanese, so everybody recognizes me in Japan. I can’t casually go to a ramen shop. I have not been on [Japanese] public transportation for over 30 years!

I think it was a good thing to relocate, especially to go with new challenges. I rarely had an opportunity to speak English when I am in Japan. London is a huge city, but there are lots of greens. I’m sure Lurie, our doberman dog is all pleased with change of scenery. My 14-year old daughter speaks perfect Queen’s English. I commute to studio by tube and bus. Sometime I feel lonely for not been recognized. (laughs)

Is there a career accomplishment of yours that you’re most proud of?

H: When I see the audience’s faces all lit up by listening to my music, I can reconfirm my message has been delivered through my music. I learned that if I can’t attract one person, I can’t attract 10,000 audience through my long career.

A few years ago, you played on-stage with The Rolling Stones. Were they one of your favorite bands growing up?

H: Of course! The Rolling Stones! I got great influences from David Bowie and Roxy Music, glam rock from 70’s in general, followed by the new wave movement, and punk killed me. Love all the music which has hint of avant garde. Recently St. Vincent is becoming part of my heavy rotation. I am convinced I may be the only guitarist on the Earth who played with David Bowie, The Rolling Stones, Roxy Music, Gang Of Four, Zucchero, Joni Mitchell, Brian Setzer, Chicago — you name it! If I may greedy, I’d really love to play live with Iggy some day.

H: It has to be “Battle Without Honor Or Humanity.” Everybody has heard this tune somewhere, even if they don’t know my name. When I played festivals, people always cold shoulder at the beginning, but as soon as I start this tune, people turn around, and change their attitude toward my performance. It is so obvious. I don’t have enough words to appreciate Quentin Tarantino. I’m totally up for placing it in Kill Bill 3. (laughs)

Aside from releasing Strangers, what else is going on in your career?

H: I can sell out 10,000 tickets, no problem, but still struggling to sell 200. I am really frustrated with this situation, but it reminded me how it was back in 35 years ago when I first started in Japan. If I can reach to audience’s heart with music, I know that they will come back for next time around. Also they will bring their friends to share the excitement. If I repeat that, a 100-person audience will turn into 500, then 1,000, then to 3,000. Nobody told me to do this. I made my choice. I have to find a way to enjoy this frustration.

H: Sadly, I don’t have any hobbies. No fishing, gold, triathlons. (laughs) If I have time, I would love to spend it with my family. My daughter is a teenager, soon she will never care about her parents, being busy spending time with her boyfriend! I’m very busy to please my daughter, hope to prolong time together. (laughs)

Finally, HOTEI, any last words for your fans?

H: I sincerely appreciate all of your support, regardless of where you are! And those who are not my fan “yet,” please listen to my music and come see me play live! I hope to deliver “positive” vibes into your life!