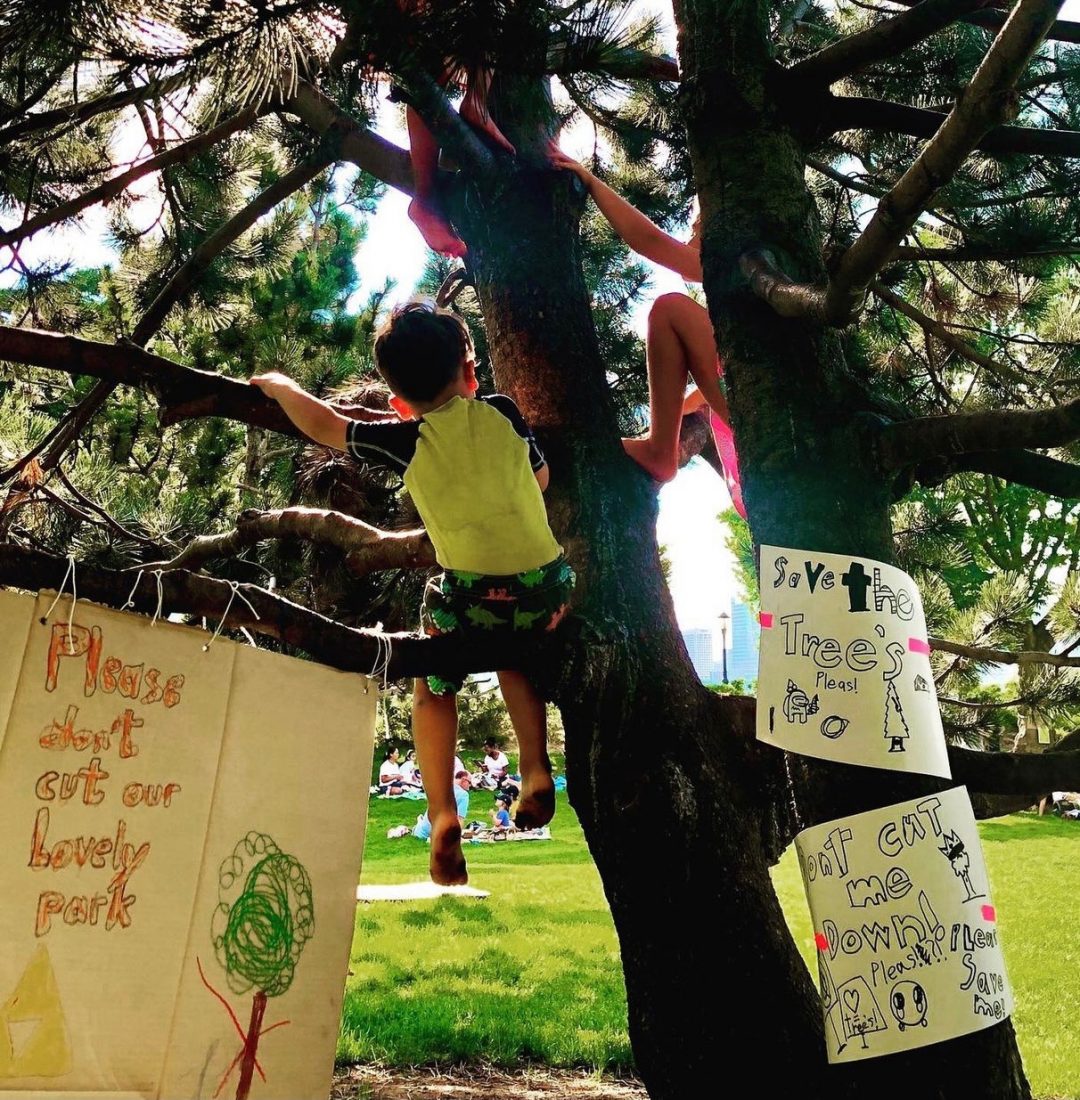 “This is a Political Unicorn”

Residents of Battery Park City and their community were not having it: Governor Cuomo was not going to take away their green space. Cuomo wants the Essential Workers Monument up by Labor Day 2021, and we’re all for a memorial celebrating those who put their lives on the line during the pandemic. But there must be a process that includes the community — is this too much to ask for?

All they were asking for was to be included in the decision, planning, and process.

Many of those who spent the night outside and braved the hot sun fighting for their rights to be heard are actually the doctors, nurses, police, and essential workers among business leaders who live and work right here in our beloved downtown.

Within hours of hearing about the bulldozers, opponents started a Change.org online petition that was signed by 5,000 individuals and counting. Busy parents and people of the area camped out in the park for days on end, and like The Lorax, “we speak for the trees” was just one phrase plastered on posters hugging the trees. In just four days, their pleas were answered- to a degree.

Many people were surprised this neighborhood came together on this issue so quickly.

“But the moms in the community were not surprised at all.  Our community is extremely unified and tight-nit— almost like a small village.  We all truly care about one another.  We already had multiple WhatsApp groups, connecting hundreds of neighbors.  We also had almost 1000 members in our BPC Parents Association Facebook group (I founded it with some friends 5 years ago.)
These platforms have been mostly used to exchange advice, give away hand-me-downs, or report a lost shoe.  So when the news got out about Rockefeller Park being at risk, we were able to mobilize very quickly by using the existing platforms we had already been using for years.
The Parents Association has now morphed into the more formalized BPCNA (BPC Neighborhood Association) and will now have a seat at the table with the BPCA (BPC Authority). The DNA of the group was formed by bonds between neighbors who respect each other and interact in a considerate, caring way. We plan to keep that style, even if the new direction moves towards political causes. “Laurie Sheindlin

Park plans were shifted away from Battery Park but applied to other locations that remain less than favorable. Plans moved to other high-traffic beloved community locations, like the site of the volleyball court near the marina in Battery Park City and next to the Irish Hunger Memorial. The fight is not over. Spearheading the protest were the likes of Korin Cohen, Laurie Sheindlin, Greg Sheindlin, Jenny Rich, Anthony Basilio, Eric Gyasi, Amy Van Buskirk, Pamit S., Lee V. Pham, Jenn Coughlin, Britni Erez, to name a few. These are not just parents, and neighbors, but business leaders in their respective fields.

“This is a Political Unicorn,” exclaimed Greg Sheindlin on the green grass under the trees at Rockefeller Park. Just days before, bulldozers showed up unannounced at that very park, ready to upheave the grass and replace it with a concrete monument honoring NYC’s essential workers.

The green space is well-loved by the people of the community, occupied by playing children, book readers, bike riders, birds, pets, and everything in between.

In protest, the people spoke out — and to think, it all started over social media. What started as a group of parents over WhatsApp turned into a herd of people that caught wind of the project. In under 24 hours, an alliance was formed against Governor Cuomo’s plan to pour concrete over grass and overturn trees.

Those whose children were raised in this area are today grown-ups themselves that still came out to fight, like Mary and Kelly McGowan, 30-year residents. They know the fight down here all too well, as they too had to fight for important issues when their children were small. “The great thing about this protest is that everyone was calm and no voices were raised: it was done with facts and from the hearts of the families and children who live and love this area. We had a mission and we were not going to give up.”

Social media gets a bad wrap, but when it’s used properly, there’s nothing like it. “Today, it’s different: at the click of a finger you can send one message to an entire community, and for that matter, around the world. When my daughter was growing up we had to rely on telephones and in-person meetings, but not today,” described Grace A. Capobianco

One politician stood out as he chanted and rallied with the parents and children. Christopher Marte was there from day one, and just happen to win his seat for District 1 Council. Other leaders still showed up after the fight was over. “We’re elected by the people and we should serve the people. If people knew how valuable this space was to parents, kids, to the little league, soccer, baseball leagues out here, this wouldn’t have even been thought of as a space that was going to be turned from green to concrete,” emphasized Christopher Marte

Tammy Meltzer, Chair Community Board 1, was at the protest and rally and fighting every step of the way at the meetings. “To lose any of the quality of space that is part of this green space is really unfair to people,” she noted.

Meltzer’s teen daughter added, “we grew up in Battery Park City: this is our home and going to other places, it’s not like this — this is one of the only places that has so much green open space. Everywhere you go it’s used extensively by all kinds of people, which is something really beautiful that you don’t get everywhere.”

It was unanimous to all parents, grandparents, and those without children that while the community of New York City and Rockefeller Park would love to honor the heroes of the COVID-19 pandemic, they would like to honor it without losing the city’s already limited greenspace.

As of today July 12, 2021, the fight continues, and all residents want is a seat at the table to have their voices heard.

There is a rally today at 4 PM Irish Hunger Memorial.