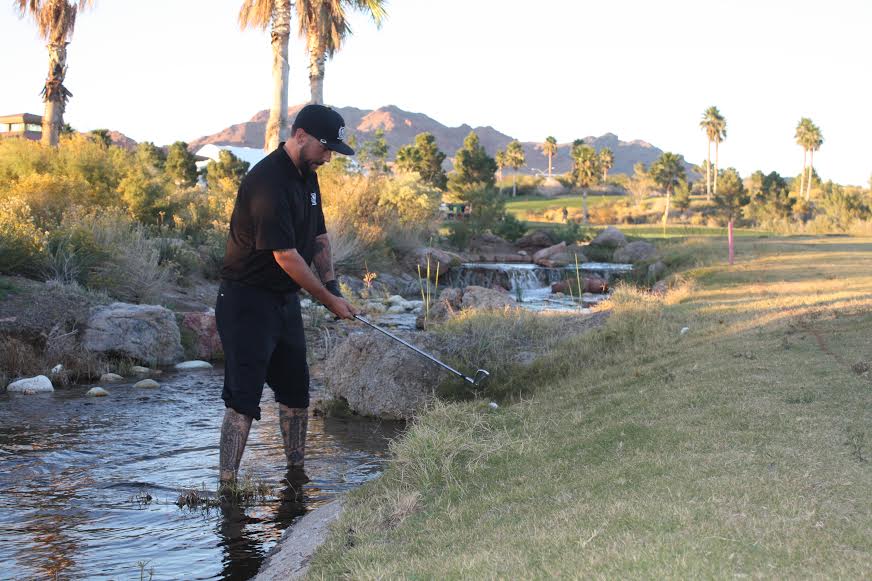 Golf is a sport that millions of Americans of all ages play regularly. The activity itself is of a competitive nature, while also providing a relaxing, introspective and bonding experience. It is probably one of the few things that Alice Cooper, Celine Dion, Snoop Dogg and Charles Barkley all enjoy and have in common. However, golf is not known to be the most inclusive of activities, and the primary governing body of its professional athletes (the PGA) is hardly known for its sense of humor.

And then there’s the Mediocre Golf Association. Formed by Jon Morley and “Straight” Willie Dills, the MGA not only approaches golf with a sense of humor, but invites others to get involved. It has dozens of chapters open around the world, also hosting tournaments around the globe for its members. As with the aforementioned PGA, these tournaments form a circuit, which carries rankings and cumulative prize money; the winner of November 2015’s Mediocre Golf World Championship in Las Vegas will earn a whopping purse of $10.10.

MGA co-founder Jon Morley – currently carrying a global rank of 227th, per his player page – took the time to answer questions about the organization. Let’s just say that he may have swayed me to go golfing for the first time. During our chat, Jon revealed that a New York chapter is in the works, should you also be considering entry onto the MGA circuit.

Where did the idea for the Mediocre Golf Association come from?

MGA’s Jon Morley: We suck at golf and the PGA wouldn’t return our calls, so we decided to start the MGA. It’s VERY similar to the PGA Tour, with golf balls eventually ending up in holes and all competitions being played on grass. So yeah, pretty much the same, except without the douchebags or millions of dollars.

And how did the nickname “Lucky Kick” come about?

J: I had one magical year where every single shot I sliced into the trees would get spit out into the middle of the fairway. It happened so consistently, I actually started to feel bad about it, like I was cheating somehow or had some magical wizard power over the ball. The nickname has stuck around, but the luck has not. I am a mere mortal now.

You placed 13th at the San Francisco Bratish Open earlier this year, earning a prize of six cents. Is that a good feeling? Or was there a lot more pride when you won 2013’s The Bastards and took the $1.26 grand prize?

J: That 13th place is a touchy subject, so thanks for asking. It basically marks the end of my challenge for the SF Chapter Money List title this year. Going into the Bratish I was 5th on the list, but now after shitting the bed, I’m a distant 8th, a full $0.69 back of the leader. It’s not impossible and thankfully all the people I have to overtake aren’t very good at golf, but it’s still going to be tough to make up $0.06 at a time.

Given that the MGA gives out prizes to its top competitors, there must be sponsors involved. Who are these great sponsors that we the people ought to support?

J: I appreciate the gesture, but we are a member-supported organization through a yearly membership fee. Some chapters do have small sponsors that cover their trophy pack costs, but having the MGA overall sponsor-free is nice. It allows us the freedom to call people douchebags without fearing that our sponsors will take away our allowance. We are open to the idea of sponsors, but it would have to be a company well in line with our sense of humor. If you look closely, you’ll notice the prizes you speak of are carefully marked as “money” on the site, emphasis on the quotes. The checks are just meant to be tiny trophies that show where you finished and how many “dollars” – points, basically — you picked up that weekend.

What do you wish more people knew about the MGA?

J: I wish more people knew how easy and fun it is to start a chapter. We currently have 68 chapters worldwide and we get a lot of applications, but then most of them convince themselves that they wouldn’t be capable of running a chapter, which is ridiculous. Have some confidence, people!! I still run the SF chapter in addition to running the entire MGA and keeping the bills paid with my “real” job. I put about six hours of work into my chapter each month, and that includes the five-hour round of tournament golf.

What does it take for someone to join the MGA circuit? Or even start a chapter?

J: Joining is easy. Check the map on the “Chapters” page and see if there’s a chapter near you. If there is, contact the Chapter Leader and prove to him that you’re not a douche. If you trick him into believing that, you can click the “Join the MGA” button and join on up. Starting a chapter is easy as well. Just click the “Start a Chapter” button and read the info. DO NOT GET SCARED, YOU CAN DO THIS. From the “info” page, you can click on a link to submit an application. Those applications go right to me and I respond to them kinda quickly.

Has someone from the PGA ever reached out to praise your organization?

J: Not yet. I actually expect to receive a “cease and desist” letter from them before I ever get a letter of praise. I’m not sure they have the sense of humor to appreciate us. Actually, now that I’m thinking about it, I already received one! A little while back I got a message through YouTube from some dude at the PGA Tour. It’s his job to tell people not to give the PGA Tour free press by repurposing and rebroadcasting PGA clips. To this day I still feel awful about the $0.06 cents in ad revenue I cost the tour. I mean, hell, that’s big money — you’d have to finish in 13th place on the MGA Tour to come up with that type of dough. I do have one other quick PGA story. In the very early days of the MGA, 2008 to be precise, I received an email from a friend that read, “I just thought you might like to know, I FWD your web-site [MGA] to a friend of mine who just happens to know Tiger Woods, they are like family, Tiger was even the best man at his daughter’s wedding. Anyway, TW thought that it was rather funny stuff….” When I read that I got a rush of adrenaline like I’d never felt before. You have to remember this was back when Tiger was a God of the golf world. An iconic wax figure of a human who toyed with our emotions by hitting impossible golf shots at the most dramatic times possible.To think that he laid eyes on our dinky iWeb [at the time] site and thought it was “rather funny stuff” made my year.

When will the MGA next be coming through New York and/or New Jersey?

J: Funny you should mention that. A new chapter is forming in Queens as you read this! It’s not quite operational yet, but it should be very soon and they will be holding the last four events of the season between now and October. Anyone who plays in at least three of them is eligible for our MGA World Championship in Vegas this November!

When not running the MGA alongside “Straight” Willie Dills, what do you like to do with your free time?

J: Well, my “real” job is to teach people how to race cars. So I spend a lot of time coaching other people and I still do some racing myself. Before you go off on what a great job it is, I actually just had a guy crash a Porsche with me in the passenger seat not too long ago, so it has its drawbacks. I also enjoy live music and I’m seriously considering trying to learn how to play guitar — and failing for the fourth time. Willie is a kinda successful podcaster and has a kinda large following on Twitter [his handle is @williedills]. He’s also known as the “greatest player to never win a non-major” in the MGA.

Finally, Jon, any last words for the kids?

J: Don’t put off awesome. Do it now. Oh, and finish every putt, you fucking cheaters.