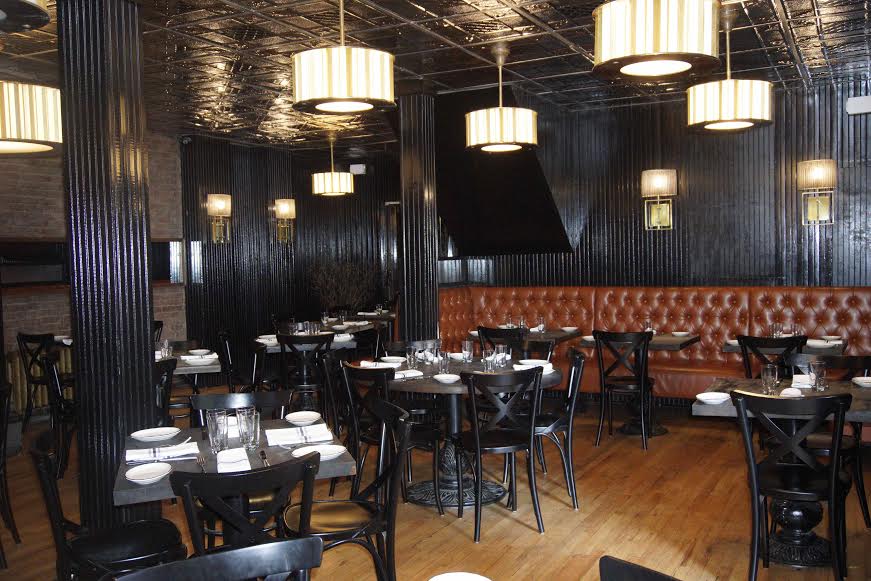 The Fillmore Room (146 10th Ave.) may have opened a few months ago, but this isn’t the first go-around for chef and owner Liran Mezan. Prior to this venture, Liran was a chef within the ranks of The ONE Group and BLT Restaurants, to name a few hospitality groups; with the former, he served as corporate executive chef for STK’s Meatpacking location. Liran also found his niche as the face of such establishments, making appearances on programs like Martha Stewart and CBS New York’s Cooking On The Couch.

Liran took the time to answer some questions about The Fillmore Room for Downtown, not only opening up about his background but also how the restaurant is able to offer some of its value-oriented promotions without compromising quality. I also found his approach to on-site dress code refreshing. Expect great things from the Fillmore Room, which occupies the space held for decades by Moran’s.

Owner and Executive Chef Liran Mezan of The Fillmore Room

You were born in Israel, grew up in New York City, and then moved to California’s Napa Valley when you were 21 years old, three very different places in terms of climate and traditionally cuisine. Is there a place you haven’t yet lived but would one day love to? And perhaps even explore the cuisine further of?

Liran Mezan: Ideally somewhere in Southeast Asia or South American. I’d love to spend time in either Thailand or Peru and learn more about all the ingredients they’ve been using indigenously and through colonization.

How did you get your start as a chef? Did you have to work your way up starting as a busser, barback and/or a line chef?

L: Started as a prep cook and moved up the ranks. My first real job in a restaurant I was chopping onions all day. I had no more tears after a few days…

A lot of chefs dress upscale, but you’re known to dress more casually. Did this approach ever get you in trouble? Where did the idea come from to dress more comfortably, as opposed to honoring traditional expectations for dress?

L: I started my career in a very strict restaurant environment run by the Culinary Institute in Napa. We had to starch our coats and wear the handkerchiefs and toques. Over the years, as I started traveling to work, I had to lighten the load and be more casual and have a wardrobe that can be fine at or outside work. I’d travel to different climates and would be at meetings and not just in kitchens. So I had to adapt and the style stuck. I do still like to wash my own coats at home sometimes and iron them with starch…

For someone who hasn’t yet come to The Fillmore Room, how would you describe it? Is there something you wish more people knew about the establishment?

L: The biggest thing is that I’m a working chef/owner who wanted to keep the beauty of this space but change the food and bar program to reflect old New York and modern tastes.

Being both owner and executive chef of an establishment, what is your biggest challenge beyond finding time to do everything?

L: Finding time is the biggest challenge. The balance is always skewed in some direction and other things start to suffer, at work and in life.

Given that the Fillmore Room space was previously occupied by Moran’s, which had opened in the 1950s. Was there any hesitation for you to open in a known space like that?

L: The biggest hesitation was that people would be a little upset that this staple went away. I still see regulars come in and we try to get them comfortable with the changes, yet some do not.

Where did the name for The Fillmore Room come from? Is the name in any way an homage to the old Bill Graham concert venue?

L: Two things – I grew up on a Fillmore Avenue, and when I lived out west I did used to frequent The Fillmore. I’m a big fan of the legacy of The Fillmore East, which had a revival in NYC at Irving Plaza. I thought originally to give this place a rock and roll theme, but wanted it to have its individuality, so I didn’t.

Between the Dollar Oyster Summer Happy Hour, the Highline Express Lunch, and the Weekend Bottomless Brunch, there seem to be a lot of value-oriented dining options. How is that your establishment is able to provide quality while keeping a lot of reasonably-priced promotions going?

L: First, we worked with vendors to find quality items where either portion sizes were controlled or the price on bulk purchase was lower for same items. But they are not wholly intended as purely value-orientated options. I see each meal period as a marketing opportunity to build business. We came up with a marketing budget and included these. If someone comes in for the lunch special we hope that one day they will come in for dinner as well. We actually created incentives for anyone who might book a dinner while seated at lunch.

Are there any upcoming events or promotions for the Fillmore Room coming up that you can discuss? Perhaps even a move into live music in the future?

L: We’re working with entertainment promoters to bring in a variety of performances including comedy nights, live music, and others.

Finally, Liran, any last words for the kids?

L: Our mac and cheese rocks!