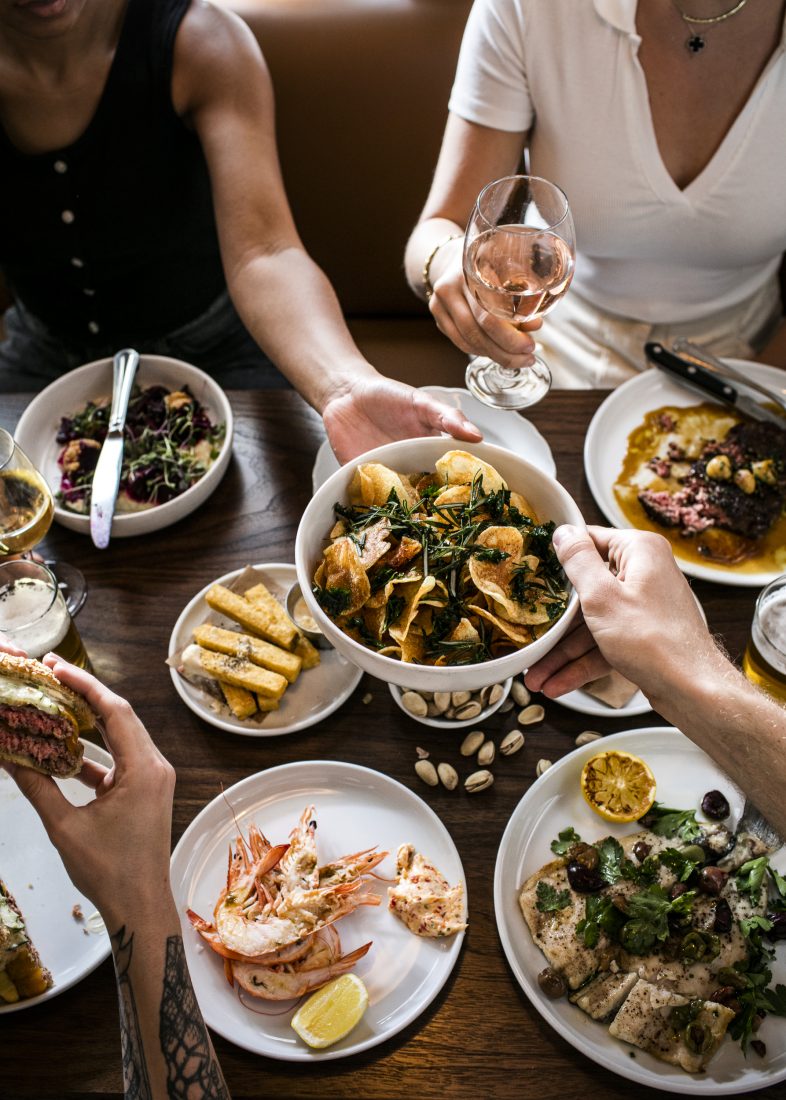 Small bites are big on flavor.

A CRISP, SATURDAY NIGHT IN FALL OR WINTER is the perfect time to share several small plates, or tapas, with family and friends while enjoying a glass of wine, artisan beer, whiskey, or the best cocktails that New York City’s restaurants have to offer. We’ve carefully chosen these downtown tapas spots to blow your mind with each bite and sip. 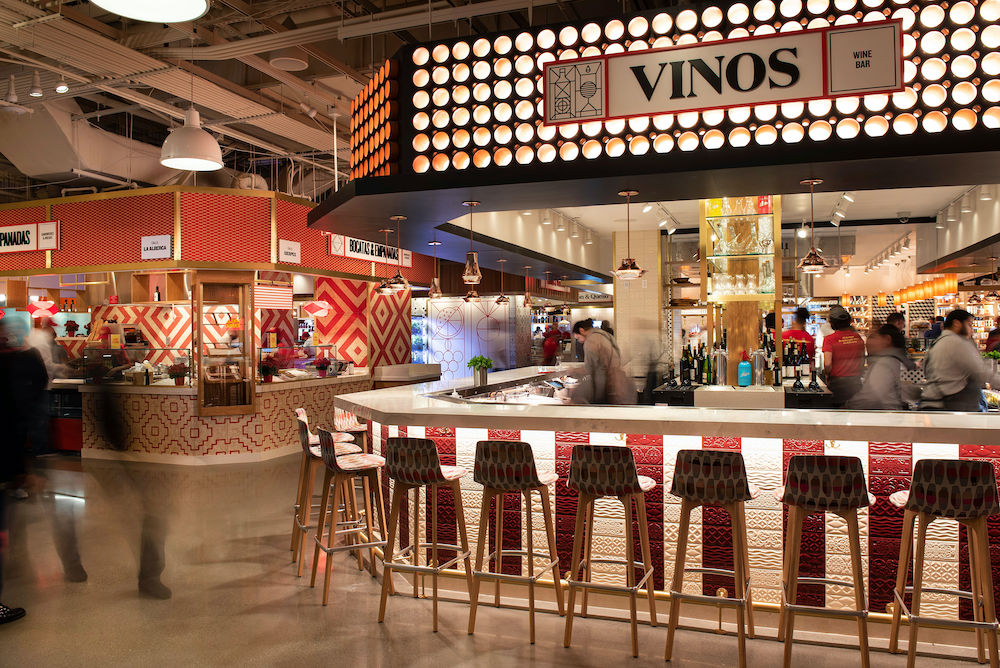 Paella, jamon ibérico, gazpacho, and tapas: Spanish cuisine is renowned for its flavors, colors, and vibrant mixture, making it perfect for large meals while also enjoyed in small portions with a jar of sangria. Mercado Little Spain unites the traditional foods from all of the different regions of the country in one place.

The idea came from an informal talk between Chef José Andrés and Head Concept Chef Nicolas Lopez, and the restaurant officially opened in 2019. With four restaurants, a bar, kiosk, and shop each selling authentic Spanish ingredients under one tremendous roof, Mercado Little Spain is a must-go spot in Hudson Yards.

“It’s not just a restaurant, it’s an experience. It’s more about introducing New York City, or the world – since NYC is the capital of the world – to Spanish culture through the food. You can find almost a little bit of everything from Spain. You can expect the unexpected,” says Nicolas Lopez, Mercado Little Spain’s Head Concept Chef.

At Leña, dishes are cooked in the traditional way of northern Spain and Cataluña. Everything from meats, fish, vegetables, and the beloved paella is cooked in charcoal. El Chiringuito is a casual outdoor restaurant serving drinks, tapas, salads, and sandwiches inspired by the oceanside bars of Spain. There’s also a Spanish Diner that serves many dishes with eggs and tortillas. Lopez explains that in Spain, the restaurants that are most similar to an American diner serve homestyle food. “It’s like your abuela’s (Spanish for grandma) cuisine.”

For those seeking to dive deep into the world of tapas, a trademark of the Spanish way of life and socializing, they’ll have the opportunity to do so at La Barra. The traditional Chicken or Jamon Croquettas are highly recommended. People can also choose from a wide selection of wines, beers, and vermúts from around the country, or order a jar of sangria to share. 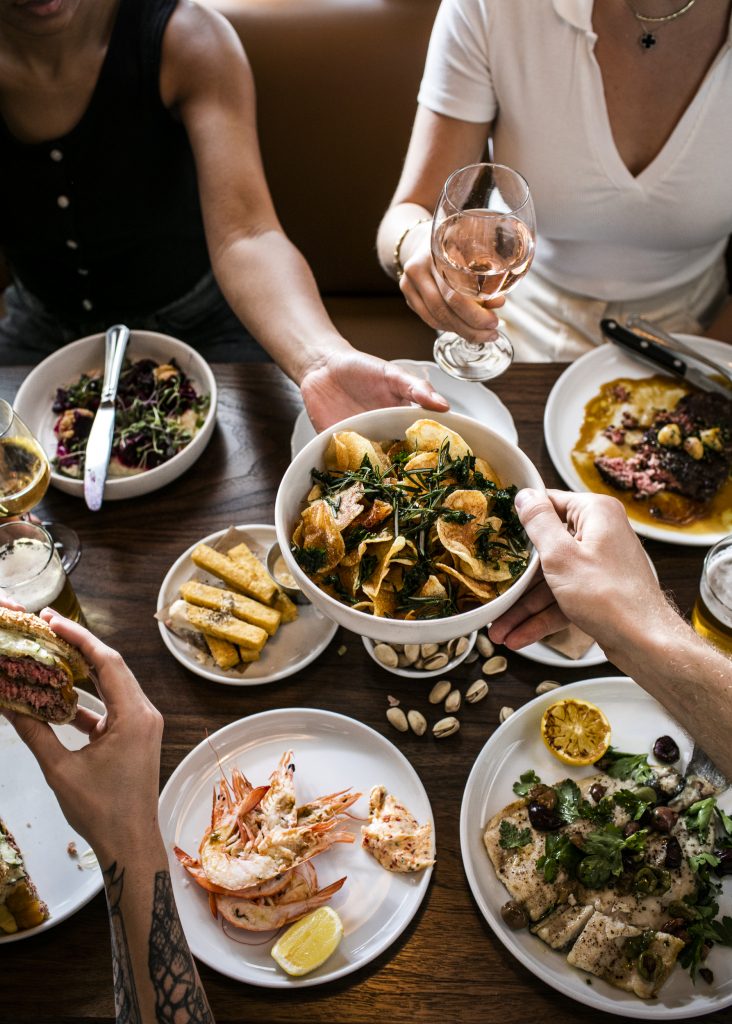 Located in East Village where the once iconic Great Jones Cafe was, Parisian-inspired restaurant Jolene has snacks and appetizers for all kinds of tastes. The idea is simple: share a meal while drinking some good wine. Restaurateur Gabriel Stulman and his partner, Executive Chef James McDuffee, are bringing a sense of connection to the neighborhood, something we all need following a pandemic.

“The idea for the restaurant was to align the food more with the effort that we put into curating the wine selection. It was a response to how we wanted to eat. Smaller plates, simpler food, build a meal around a bottle of wine,” says Executive Chef James McDuffee.

The menu features easy-to-share smaller plates like Arancini and Babaghanoush of roasted zucchini with toasted sesame seeds, salmon rillette, and trout roe with Ritz crackers. But if your hunger craves for more, the Crispy Chicken Milanese with artichokes, olive and lemon aioli is a good choice for an entree.

With a passion for Mediterranean food, Chef McDuffee has experience in a variety of acclaimed restaurants and different kinds of cuisines. For Jolene, he’s bringing something that reminds him of his home.

“A meal isn’t just a single dish that’s yours, it’s also the common rotary of the table. It’s all of these plates that you share. Where I grew up you didn’t have a plate of food, you had a plate and all the food was laying down in the middle, and you would pass the food back and forth. I think that’s a really engaging way to eat,” says McDuffee. 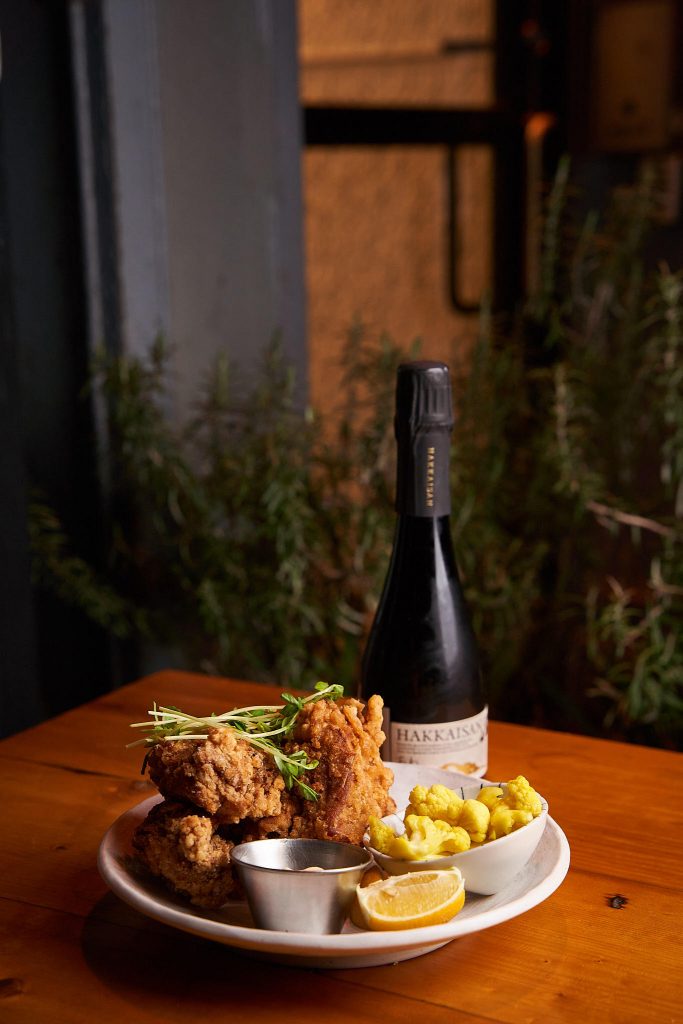 Bessou is a Japanese term for “second home,” and that was the exact feeling that Maiko Kyogoku wanted her customers to have when they entered the restaurant. Coming from a family of restaurant owners, it’s easy to notice that the business was in her blood. When opening Bessou, she succeeded in sharing her family’s food traditions and giving it a modern touch.

“We take creative inspiration from the local ingredients and different cultures of New York City and infuse it into Japanese home cooking. In Bessou, you will be tasting familiar flavors
in unfamiliar dishes that are actually comfort dishes in Japan,” says Kyogoku.

Their signature dish is the Chicken Karaage, which is a Japanese-style fried chicken with Moroccan spices. Pair it with a sparkling sake, the traditional Japanese drink, and
it’ll taste like classic fried chicken with champagne, Kyogoku says. The restaurant’s menu is seasonal with locally-sourced ingredients. It features several types of sake that go well with their variety of small dishes and sushi, such as the Salmon Crispy Rice and the Scallion Pancakes with pork belly, topped with spicy sesame and black garlic sauce. Going to Bessou makes for both a dining and drinking experience. 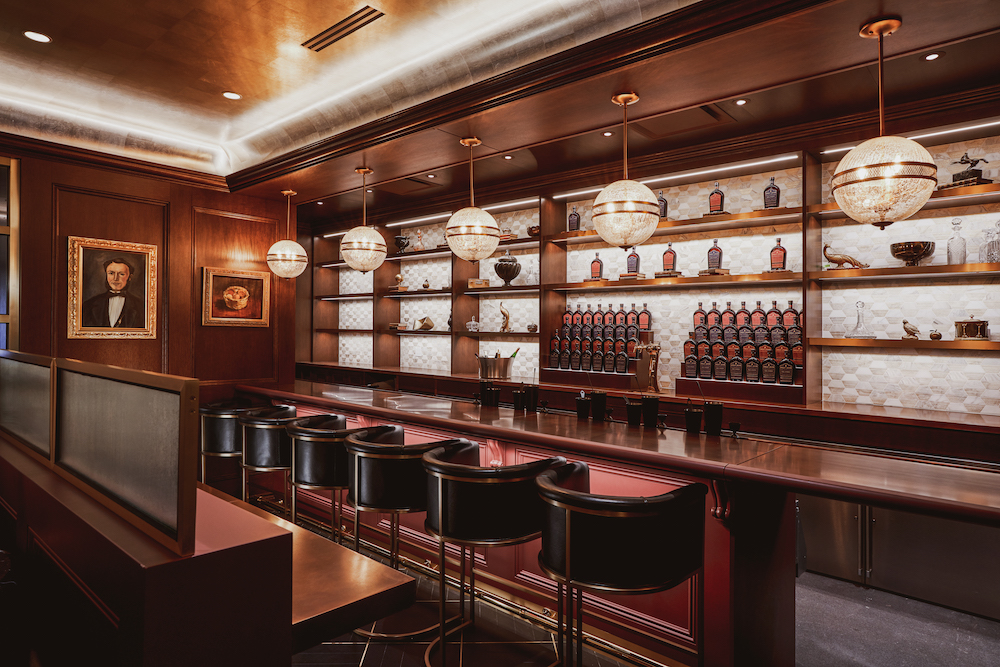 “I love the peppery citrus notes in the Great Jones Rye,
for example, and love to contrast it with a luscious French onion soup iteration. It can also be used as a complementary sip with our kalamansi sorbet. Also, keep in mind that the whiskey pairings are used to play off of each other with each bite and sip for the ultimate indulgence,” says Chef Adam Raksin.

What makes Great Jones interesting is how the chefs have incorporated whiskey throughout the menu. Bourbon is blended in apple compote for cheese plates, and the
Four Grain is added to the au poivre sauce for the NY Strip Steak, for example. But what Chef Raksin says people should definitely try is the exclusive “Great Jones Washed Peggy” – a rind style cheese, washed with their straight bourbon. 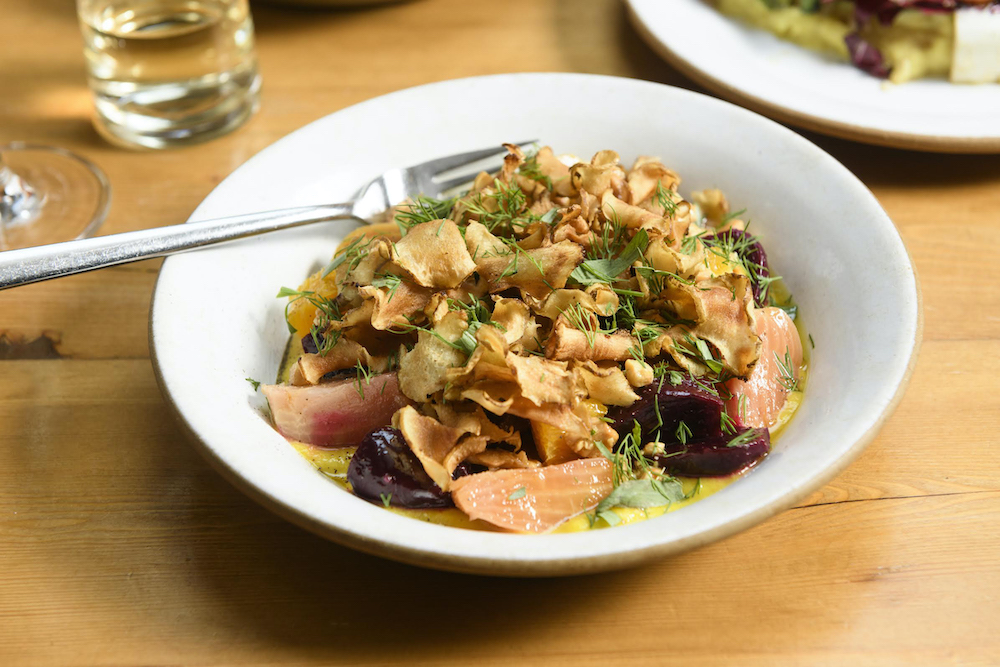 Having opened in 2016 in a historic 1848 building in the heart of Greenwich Village, Loring Place’s design beckons you to enter the restaurant. The fresh, locally-sourced dishes and hand-crafted cocktails make you never want to leave. The seasonal menu features both small and large shareable dishes, spotlighting farms and farmers whom Chef Dan Kluger has gotten to know at the Union Square Greenmarket.

“I was enamored by the seasons of New York City and the bounty of the market. Walking from stand to stand and putting my hands on three or four great ingredients, using that as the inspiration for a dish, quickly became the way I liked to cook,” says Chef Kluger, who has cooked in some of New York’s beloved restaurants, such as ABC Kitchen. Using simple ingredients, he creates dishes with a complex layer of flavors, textures, and colors, like the Grilled Strawberry Salad with sungold tomatoes, cucumbers, and red wine vinaigrette. For the fall, Chef says customers can expect several dishes with ingredients such as butternut squash and brussels sprouts. The famous beets and zucchini “fries” are changing to butternut “fries,” which he is always excited to bring back to the menu, says Kluger. 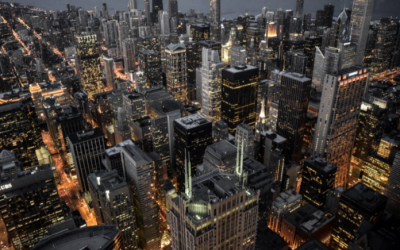