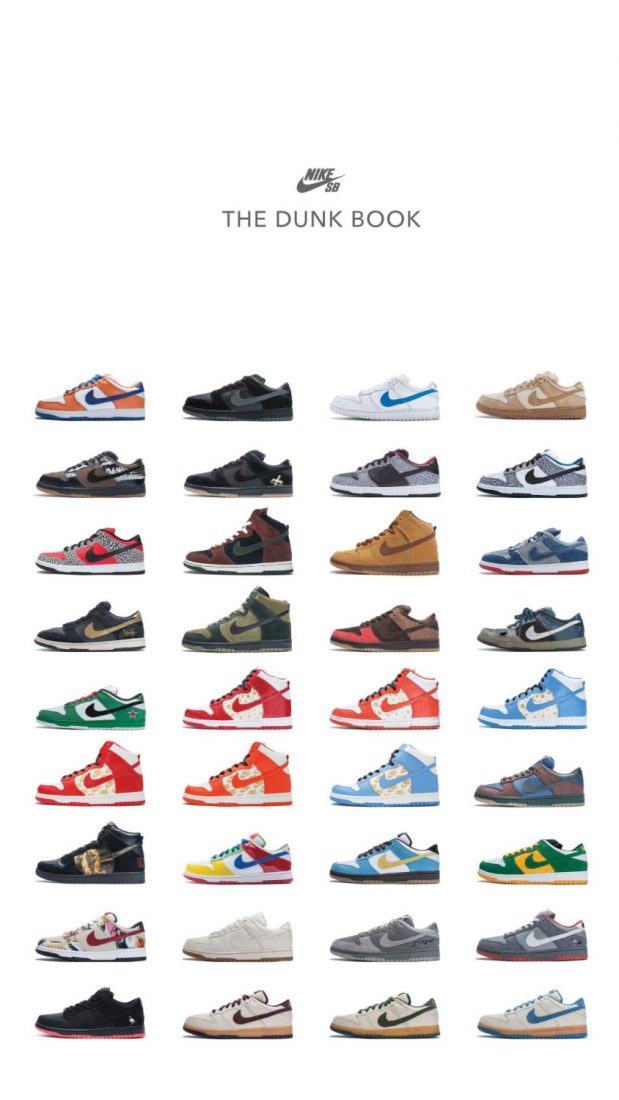 Nike SB: The Dunk Book (Rizzoli, Oct 2018), catalogs the fascinating history of how Nike SB’s iconic styles came about and the surprising effect they have had on skate and youth culture, then and now.

When the Nike Dunk first appeared in 2002, the design was tailored to the basketball court and legions of fans took notice. It took just a few sneaker obsessed followers—often referred to as sneakerheads—and a group of skateboarders to completely flip the Dunk into a skateboarder’s ideal shoe for both performance and style. Nike, in good form, went with the flow and the SB Dunk was born.

When skateboarding first caught on in California in the 1950s, it was egged on by surfers trying to bring the waves to the streets. Rises and peaks in popularity followed until a few diehard fans across the country turned it into more of an underground, counterculture movement that continued through the 90s. Skaters, with their cool streetwear, lack of adherence to convention, and total dedication to the sport soon translated into Nike tapping some of the big names in skateboarding to design shoes. From Danny Supasirirat “Supa” to Paul Rodriguez and Todd Bratrud, so many of the most well-known skaters today have designed historic Nike SB shoes. Styles such as the Pigeon Dunks, De La Soul Highs, U.N.K.L.E.s, and the Supreme Dunk SBs have forever eliminated the gap between art and sneakers while also bringing validity to a sport that literally started on the street.

In Nike SB, uplifting anecdotes from skaters such as Reese Forbes, Daniel Shimizu, Richard Mulder, and Eric Koston, paint a picture of how each became acquainted with certain designs and how these shoes came to stand for so much more than footwear. In the book, there is even a supremely touching tale of how Nike honored the late and much-loved skater Lewis Marnell with a pair of sneakers.

Nike SB Dunk has given skaters, artists, musicians, and even collectors a way to express themselves through one-of-a-kind designs that often have hidden references, relate to the happenings of the time, and are constantly improved upon.

The shoes even spawned debate between the ride/collect crowd that continues today. When Futura was offered to chance to design a very limited-edition shoe for his store in Japan, the skater referenced this argument by designing a shoe called FLOM. And acronym, “For Love or Money,” the name was a subtle jab at the collect crowd. Regardless of which category one falls into, the historical and photographic archive captured by Nike SB renders the book a definite collectable. (For a video montage of some of the designs, see below!)