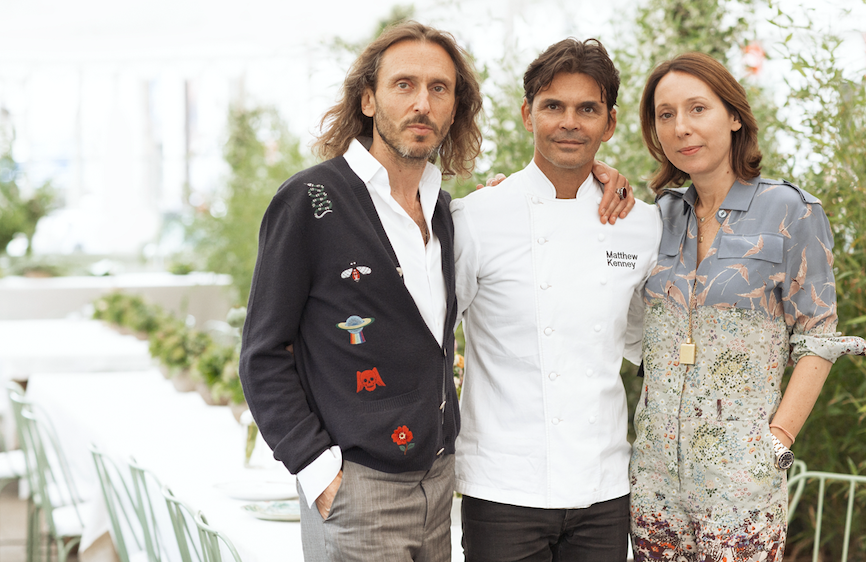 Could you imagine a world-class, 150-year-old French patisserie going vegan? Through a partnership with Elisabeth and David Holder, presidents of Ladurée USA, plant-based chef and author Matthew Kenney, introduced vegan dishes to this world-renowned brand.

Downtown: When did you decide to specialize in plant-based cuisine?

Matthew Kenney: It was an intuitive decision. I really made a career for myself in the NYC restaurant scene after first entering it, and my restaurants definitely didn’t have a focus on anything related to vegan. This was in the 90’s, so the term “vegan” just wasn’t something anyone, including myself, really recognized. The restaurant industry is a tough one, and I began taking up yoga and meditation to keep me centered amidst it all. The more in touch I became with my body, the more I began returning to my passion about the “source” of food.

It wasn’t until I ate in a hole-in-the-wall vegan restaurant, by complete chance, that something finally clicked. The food was raw vegan, not at all glamorous, but I walked 5 miles around the city afterwards because my body felt so revived. I knew there was an opportunity here; what if I could make food that made people feel this good, but without making it feel like a compromise? So I became determined, right then and there, to create innovative, gourmet vegan food could be as sexy and luxurious as a traditional fine dining experience.

DT: How did your partnership with Ladurée start?

MK: Elisabeth actually reached out to me on Instagram direct message. She and her brother, David, run the company, which has been in their family since the early 90’s. The company itself is 150 years old, and I can imagine the challenges presented when dealing with antiquated practices in a modern day market. Both Elisabeth and her brother are strongly influenced by health and wellness in their personal lives. David has been a vegetarian for over a decade and both stick to vegan standards for the majority of their diets ­ and incorporating that into the Ladurée legacy is really important to them. Our conversations fostered this excitement about how we could pursue this partnership and introduce a plant-based focus within a brand that has a long-standing reputation for its love of dairy and butter.

DT: What are some of the dishes that you created for Ladurée’s special vegan menu?

MK: The Beverly Hills location is the first 100% plant-based restaurant, while we are adding vegan menus to other international locations as a supplement to the regular menu. We have plant-based omelets that taste almost identical to the real thing but with a mung bean base. There is plant-based Croque-Monsieur with nut-based gruyère and tofu ham that is phenomenal. We’ve redone all of the macarons with the same selection of classic flavors, as well as all of the usual French staples: meringuèes, biscuits, croissants, puff pastries, pound cakes. There’s a lot.

DT: What does world-renowned Ladurée going vegan represents to the future of cuisine?

MK: To quote Elisabeth and her incentive to pursue this partnership, it’s a “Green Evolution”. The world is acknowledging the impact that our diets have on the planet and our health, and the surge of plant-based menus and products in today’s market are an indication of that. Following a vegan diet has never been mainstream. It’s conceivable that people are daunted, or maybe just puzzled by, the concept of cutting out animal products, because it seems so obscure and restrictive ­- when the reality is that it’s not.

If a world-class, 150-year-old French patisserie can serve the exact same menu with the exact same style and chicness, with the only difference being the source of ingredients, we can open the minds of a lot of skeptics. It showcases the potential of plant-based cuisine and allows people to understand that eating this way is not a sacrifice of their favorite foods or flavors. It’s not hard, but actually more appealing in more ways than one.