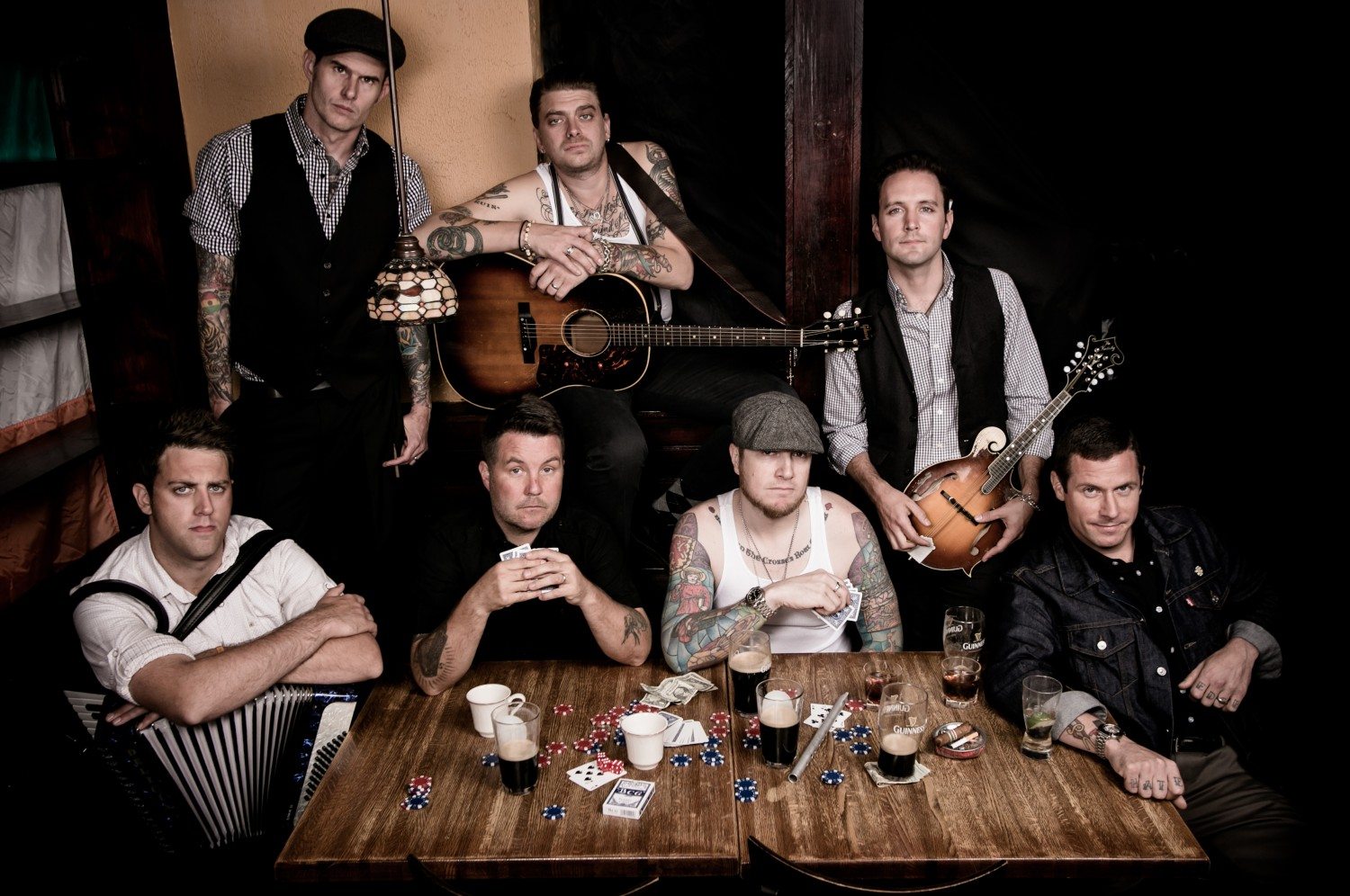 Few bands have experienced ascending long-term success like the Dropkick Murphys. In the late 1990s, the Boston group was a big deal in the punk world, headlining clubs after The Mighty Mighty Bosstones took them out as a relatively-unknown support act. In the early 2000s, the band arguably became “the” musical artist that everyone associates with Boston, recording anthems for the Bruins and the Red Sox; such also made them one of “the” artists of St. Patrick’s Day. The Murphys’ 2006 single “I’m Shipping Up To Boston,” as originally released on a Hellcat Records compilation, was placed in the Academy Award-winning Martin Scorsese film The Departed. Then just a few years later in 2011, the Dropkick Murphys were headlining Fenway Park. While that alone seems like the crowning achievement for a group of Bostoners, the Dropkick Murphys performed at Massachusetts’ Gillette Stadium last year before the Patriots’ season opening game.

Boston isn’t the only city that celebrates the Dropkick Murphys, as evidenced by the sextet’s upcoming two-night stand at Webster Hall. Playing Mar. 9 and 10 in the East Village as part of its 20th anniversary tour, Tiger Army and Darkbuster are also on the bill. Drummer Matt Kelly spoke to Downtown about the Murphys’ past, present and future. Not only did he provide some great answers within our Q&A, but he impressively remembers the date of his first punk show. Kudos are also due to Matt for his well-used Twisted Sister reference.

For more info on the Dropkick Murphys – which also includes bassist Ken Casey, vocalist Al Barr, guitarist James Lynch, and multi-instrumentalists Tim Brennan and Jeff DaRosa – click on over here. The Ken Casey-founded non-profit organization The Claddagh Fund can be followed here, while the Ken Casey-co-owned bar McGreevy’s is based online.

At what point did you know that the band was a viable long-term career and not just hobby or an underground thing?

Matt Kelly: Soon after I joined, the idea was to “go for it,” so to speak. Probably around May or June ’97, everybody finished rounding up their jobs and we got cracking on the road. The only person who kept his job going for at least a little while from the road was original guitarist Rick [Barton]. He ran a painting business and attempted, sometimes successfully, to run it while on tour.

The actual reason why the first drummer, Jeff [Erna], left was because he had no interest in being a touring, full-time band. Some people just aren’t cut out for it and that’s understandable. At least he knew it wasn’t for him.

As far as knowing it was a VIABLE long-term career, I don’t think you can really look at it like that when you’re in the thick of it. If you rest on your laurels, you get left in the dust. To quote Twisted Sister, you have to “stay hungry.” With typical audiences being so fickle, we’re incredibly grateful that we have such great support all over the world. Our fans are the best!

Do you remember the first punk band that you ever saw live?

M: As I’m at least five years younger than the other original members, I missed out on the ‘80s punk scene by a couple months. My first punk/hardcore show was Hearing Impaired, Backbone, and Dawn of Rage at the Club 490 in Fitchburg, MA on February 3, 1990.

What about the first band that showed you that you could make a living based on DIY work ethic, as opposed to requiring radio hits and major label backing?

M: I honestly never considered making a living off a band — at least not in a punk band. However, seeing how the Bosstones did what they did, looking back to the early and mid-‘90s, I can see that that was pretty much what they were doing. They were DIY. This was before “The Impression That I Get.” Now when THAT song came out and the album hit the streets, things blew up for them! I tell you what: their taking us out on the road before the Boys On The Docks” CDEP was even OUT, and before Do Or Die was even conceptualized gave us huge, possibly-undeserved exposure, and helped us out in so many ways.

Is there a professional accomplishment for the band that you’re most proud of?

M: Many things. More important things have happened to the band professionally, but I’m proud to say that we got to play alongside the legendary band Rose Tattoo in Sydney, Australia back around 2000. They’re one of my favorite rock and roll bands of all time, and just to SEE them live was a religious experience…Playing with them was an honor we haven’t yet topped, at least in my book.

A number of baseball players have come up to the plate to “Shipping Up To Boston.” As the story goes, Jonathan Papelbon was forbidden by the band from using the song after leaving the Red Sox. How did you feel about Daniel Murphy on the Mets, who isn’t from Boston, using that as his intro song for the past few years?

M: He wasn’t forbidden by us. It was a joke that became a big “non-news” story basically! (laughs) So bizarre.

It really doesn’t bother me that one of those dudes would use it. It doesn’t hurt the band. Now if the Montreal Canadiens started using it, I’d be a little irritated to say the least!

Is a Boston gig harder for you to play than a New York gig?

M: Yeah, because the pressures of home life and touring life overlap there. That, and our whole families and all and sundry are on the guest list and you’re being pulled in 75 different directions at once. Meanwhile, there’s a setlist to write, warmups to do, and a one-and-a-half hour gig to put on!

Now don’t get me wrong, playing in New York City is always crazy. We always have a huge guest list in New York, but it’s dwarfed by Boston’s. In New York we get to see some old friends but, in the even we play more than one night, we get to sneak away and catch a solid eight at a quiet, dark, hotel room. At home, life still goes on as usual, and kids don’t care that YOU played a gig last night and stayed out till three AM! (laughs)

What do you remember about the first gig that you ever played in New York City?

M: Well it was in 1997 at Coney Island High with some ska bands or something. I know that Joey Ramone bought a Dropkick Murphys soccer jersey from Brian, our old merch guy, and we talked to Lars [Fredriksen] from Rancid about him coming onboard to produce an album for us, and I met future roommate Dicky Barrett from the Bosstones/Impact Unit.

I remember Mike — our old singer — jumping in the air, David Lee Roth style, and splitting the crotch of his jeans, and I remember myself being well-nigh suicidal because I played a horrible set.

What’s ahead for the group’s charity, The Claddagh Fund? Who are the people overseeing its day-to-day operations?

M: More great works, I hope! Christine McMahon and her staff keep it running smoothly. For more information, hit up their website.

Who is the best band from Boston that our readers may not know?

M: That might be the Stranglah! That is, the Boston Strangler. Real hardcore done right.

When you’re not busy with the band, how do you like to spend your free time?

M: I spend most of my time hanging out with my family. Aside from that it’s spinning vinyl, jamming with friends, reading books, trekking around on foot, discovering awesome beers, and Boston Bruins hockey.

M: Yeah, don’t be ashamed of where you come from. Your family is your culture, so embrace it. Thanks for the interview, see yer in New York.