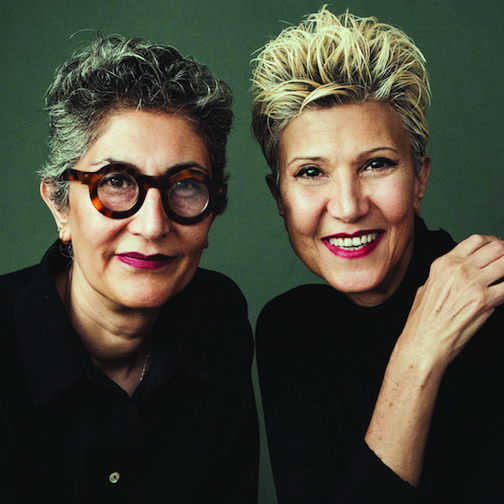 GISUE HARIRI Architects, authors, jewelry designers for Swarovski, and founders of Hariri & Hariri in 1986. Members of the Interior Design Hall of Fame. They left their home in Iran in the 1970’s to study architecture at Cornell University. In 2005, Hariri & Hariri won the Academy Award in Architecture at the American Academy of Arts and Letters awards, and their work has been included in exhibitions in the Museum of Modern Art, and the Guggenheim. Gisue Hariri serves as an adjunct professor at Columbia University, a visiting critic at Cornell, Parsons School of Design, and McGill University. Hariri & Hariri is described by critics as one of the most progressive firms currently working in the United States.

Joan of Arc was one of my childhood idols, and I admire her courage, outstanding achievements, and her superhuman-like abilities—I believe that all women have the kind of power she possessed, but need to find it within themselves. Gloria Steinem became one of my role models later on. I was fortunate enough to see this longtime feminist Icon, writer, and political activist at the 2017 Women’s March in Washington DC. She emphasized that sometimes we must put our bodies where our beliefs are. This resonated with me and I have since become an activist, realizing that women have to speak up and be there physically to support one another if we want to make a change. And finally the in 2016 U.S. presidential election, we witnessed how an incredibly qualified, experienced, educated, compassionate woman—Hillary Clinton—was side-tracked by a white male, unfit to hold office. Hillary’s strength, courage, and determination to crack the highest glass ceiling will always inspire me.

Being a warrior and not having fear of defeat. Examine everything and look within myself for answers and to find a way to express your own ideas and experiences in life. If architecture is about ideas and ideas are what we experience, then architecture that is created by women must be very different from architecture designed by men. Women experience and think very different than men. Our design approach and outlook on life is different, how could that not have an impact on what we create? Defining for ourselves what success is, what Architecture is, and what our goals are. For us, architecture cannot be defined as one thing, style, philosophy, or ism. It is the amalgamation of many things, which at its best can help us define who we are today and who we might be tomorrow. It is where beauty, sensuality, functionality, technology, and philosophy connect the body and mind.

3. If you were going to pass on one piece of advice to a young woman, what would it be? In the “Old Boy” network mentality, being part of the “Boys Club” was a measure of success that defined who you were. For us, it is finding your “inner-voice,” using your Feminine-wisdom, and trusting your vision that gives you success and ultimately defines who you are.

In my generation, most women ignored the gender-related roadblocks in our careers and now, when I look at my two daughters I realize that young women today are still dealing with the same issues! We must speak up and change this. Women can and should do a better job of helping one another. Society can and should support female-owned businesses, even if it does not make sense at times. In order to have equality, we first need equity and access to capital. The media and our cultural institutions have a duty to seek and find great, visionary women, educate them and introduce them to the larger public.

I’m proud of our 35 years of hard work in a male-dominated profession and the fact that we never gave into the idea that we needed a male partner to succeed. A competition in Salzburg Austria, which we won, called JEWELS OF SALZBURG by the town’s Mayor. This residential and mixed-use complex is currently one of the largest all-encompassing projects Hariri & Hariri Architecture has completed. Winning among the world’s best known architects such as Souto Moura (Portugal), Snøhetta (Oslo), Kengo Kuma (Tokyo), Yamaguchi (Osaka), Toshiko Mori (NY), Delugan-Meissl (Vienna), Langhof (Berlin) to name a few. This 80 Million Dollar development includes 100 Apartments, exhibition space, courtyards, and underground parking Garage. It is, however, neither the scale nor the challenges we confronted that makes our Salzburg project significant. It is this relationship between architecture and nature that have created a dialogue and meditative experience that we have carved at the edge of the site’s rock face which guides and invites the public through the site. For us, architecture is more than construction of buildings—it is where our dreams transcend the realities of life. It is a commitment that will carry you to places you had never dreamed of or known could exist before. Finally, this project is significant being one of the very few new constructions permitted in the historic city of Salzburg, offering Mozart’s birthplace a destination for the architecture of the 21st century.

From my inner guide, believing in myself, vision, and talent.

Having a sense of self, CONFIDENCE, and having a point of view.

Sisterhood among women architects and women supporting one another. Having 102 Women in the U.S. House of Representatives.