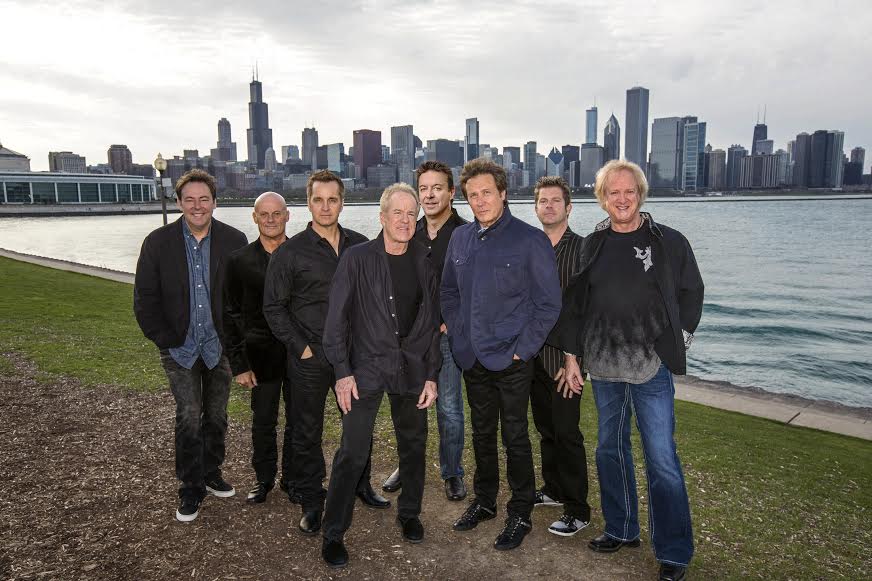 Within the few past years, a number of bands have hit the road for 50th anniversary tours including The Beach Boys, The Who and The Rolling Stones. But of those aforementioned bands, did any of them put out meaningful new material in the 1980s or 1990s?

Chicago — whose 50th anniversary is set to pop up in 2017 – is in a different boat, given that “Chasin’ The Wind” cracked the Top 40 in 1991 and “Here In My Heart” went to #59 in 1997. Beyond hitting the road for what seems like half of a year on an annual basis, Chicago’s recorded output has been steady within the past few years. Chicago XXXVI: Now, as tracked while the band was on the road, was released last July.

Having recently started a tour with Earth, Wind & Fire, Chicago co-founder, key songwriter and sometimes-frontman Robert Lamm answered some questions for Downtown Magazine. I personally am thrilled that Robert cleared up a long-standing rumor about Chicago, as told me by Public Enemy’s Flavor Flav. More importantly, Robert – who, in spite of his band’s name, was born in Brooklyn and lived in New York until he was a teenager — had plenty to say about Chicago’s future, as things do not seem to be slowing down for the rock legends.

Locally, Chicago and Earth, Wind & Fire can be seen at Jones Beach on August 16th and/or two nights later at New Jersey’s PNC Bank Arts Center on August 18th. For more information – including the pricing and availability of VIP tickets – you may count on the Chicago’s official website.

What do you wish more people knew about Chicago as a band?

Chicago’s Robert Lamm: Chicago is a leaderless group. It was always meant to be collaborative, so that each was contributing some needed aspect to the finished musical piece, or whatever the project was: video, concert, arrangement, solos, album graphics, t-shirts, etc.

Do you feel there to be any misconceptions about Chicago?

R: I think it’s fair to say that no one, other than the people who have been actually part of Chicago, know what it’s been like to essentially “grow up” and develop from adolescent musicians…into adults. We run deeper than some would think, I suppose.

Or do you find that as a band that’s always been about the music, you’ve escaped a lot of the opportunities for rumors that other groups faced?

R: The band HAS been about the music, but in that space, we’ve also realized that life goes on, with successes and disappointments for us and around us, with all the same dynamic as any family.

Having survived this long as a working musician, what is the tool that you feel has been most important for your longevity? Great songs? Top musicianship? Strong management behind the scenes?

R: We’ve been drawn into the discipline of music, the curiosity, the awesome emotion and beauty it brings. And, sure, we try to make good songs, always learning, and strong management [from band manager Peter Schivarelli] has been our good fortune

Regarding the very funny scene in Little Nicky when “Does Anybody Know What Time It Is?” is played backwards, have similar joke-oriented usages of your music ever been pitched to the band? Or did that one especially take you by surprise?

R: Yes, a few have been pitched, but recently Larry David used our classic songs as a context for his very funny film [HBO’s Clear History]. Also, many of my songs have been sampled by rap, hip-hop, and pop artists in their recordings.

Speaking of “Time,” is it true that members of Chicago played on a remake of the song with Flavor Flav about a decade ago? That is something he had said to me in an interview when promoting a still-unreleased solo album.

R: That was just me and some NYC session players. But, wow, Flav.

When it comes time to assemble a tour’s setlist, how do you go about making sure that the right number of ballads are present? And that you’re covering enough hits and favorites in your set?

R: We’ve got it down, via trial and error, over the thousands of concerts we’ve done. It requires balance, and while we acknowledge the ballads, we are, in our core, a very hard-blowing rock band.

Once the tour is over, what’s ahead for Chicago?

R: The Chicago / Earth, Wind & Fire tour will go into next year. That being said, our tour is never over, really. The world is connected and we find audiences on several continents require our attention.

Any big plans related to the band’s 50th anniversary?

R: Still a couple years to go, and a new Chicago documentary is coming. But for 50, I hope we can do something useful in the world.

When you have idle time in New York, what do you like to do?

R: I check the arts scene, galleries and museums in Manhattan and Brooklyn. Hear lots of ALL kinds of music. Always try new restaurants, and visit favorites. Do some writing with my NYC friends. I’ve spent at least half my life living here. I love the parks, and not just on Saturday.

R: NYC is a spectacularly perfect place to be young. Don’t be too serious, enjoy your energy, have fun, do no harm, find your groove and work it, work it. Be open, watch your friends’ backs, practice at least a little, hold your trash until you reach the dustbin. Did I mention, have fun?

Check out the track, “NOW,” from the band’s newest record, Chicago XXXVI: Now: