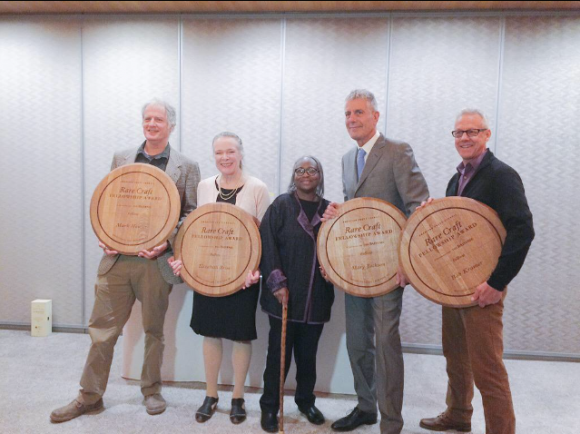 Bourdain and The Balvenie recently announced their multifaceted collaboration with the intention of bringing to light some of America’s finest craftspeople. Though Bourdain has done plenty of shows all over television, this partnership with The Balvenie is his first.

“I’ve been approached by a lot of companies and brands to work with them on all different kinds of projects but never did it,” Bourdain told DOWNTOWN through email correspondence. “I was waiting for the right phone call, the right thing and when I heard from The Balvenie, a brand I personally like, and heard about the concept—celebrating lone wolf craftspeople, doing things the long, hard old school way, I thought, okay. This is it.”

One of his main roles within the partnership includes being a lead juror for the American Craft Council Rare Craft Fellowship Awards. This year, the award was presented to Fellow Bob Kramer, a bladesmith who has put in an exceptional amount of time and precision into perfecting his craft. The winner receives an exclusive trip to Scotland to see The Balvenie distillery, as well as an endowment of $10,000 to go towards materials to continue their crafts. The additional finalists will receive a $5,000 endowment.

According to Bourdain, individuals must demonstrate a contribution to the preservation of traditional and rare craft techniques, processes, or products, and meet a quality criterion to be considered for the Fellowship.

“The award, presented annually, recognizes one winner and several finalists for their recognition and support of contributions to the maintenance and revival of traditional or rare crafts in America,” Bourdain said. “I was able to serve as lead juror for the selection process which was a difficult one as many were very deserving of this honor, but we’re happy with those selected for 2015.”

Also included in this partnership is a series of short films called Raw Craft, hosted by Bourdain, in which viewers get an inside glimpse to the workshops of some of the most creative and hardworking craftspeople in America. The 2015 Balvenie Rare Craft Collection, a traveling exhibition, will also feature Bourdain being an integral part in selecting a first class group of artisans dedicated to making handcrafted goods.

Work from the finalists on display. Photo: Courtesy of Jackie Hart/DOWNTOWN Magazine

Luckily, DOWNTOWN had the privilege of attending the award luncheon with their Advisory Board member Luigi Rosabianca and CEO/Publisher Grace A. Capobianco to witness the achievements of these remarkable artists who have perfected their respective trades. The ceremony and lunch was beautiful, filled with plenty of inspiration, great food, and plenty of Balvenie whisky! It was an honor for us to be involved in the commemoration and celebration of such fine craftspeople and artists alike.