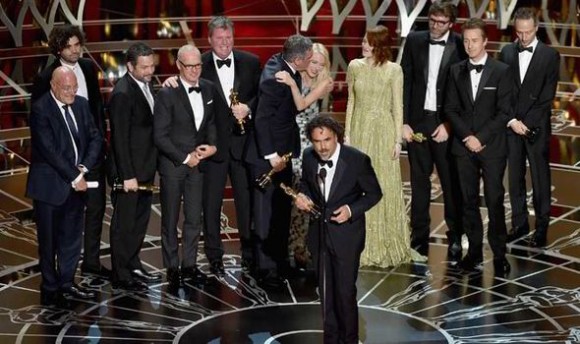 The Birdman cast after scooping up the award for Best Picture.
Photo: Courtesy of express.co.uk

A night filled with few surprises and an overdrawn out telecast, Hollywood’s biggest night was lackluster, with its only redeeming quality being the inspirational acceptance speeches and performances.

Not to say that Neil Patrick Harris didn’t try. He did. The opening musical number he performed with the help of Anna Kendrick and Jack Black was a fantastic way to start the show, and it was Harris doing what he does best. Though it was his first time hosting the Oscars, it wasn’t his first time at the rodeo, either. He’s managed to captivate audiences by hosting the Tony Awards in previous years. But many of of his jokes fell flat (probably thanks to some badly written material), and Harris seemed to be disconnected from the material.

2014’s year in movies was seemingly interesting and vital to filmmaking, not just artistically speaking, but also in engaging viewers and giving something people to talk about. Nominees like American Sniper and Selma are glaring examples that spurred conversation and stirred controversies that kept people talking well after the run time was over. But this year’s show failed to capture that engagement and excitement from the buzz of the nominees this year.

However, the saving grace for the Oscars this year were the uplifting and inspirational speeches from Patricia Arquette (Winner of Best Supporting Actress, Boyhood), John Legend and Common (Best Original Song, “Glory” from Selma) and Graham Moore (Best Adapted Screenplay, The Imitation Game).

Arquette started off her speech thanking her family, cast and crew and then went on to preach for women’s rights and equality by exclaiming, “It’s our time to wage equality once and for all and equal rights for women in the United States of America!”

John Legend and Common followed suit with a similar sentiment of their own after picking up the award for Best Original Song for Selma, and bringing down the house with an emotional performance of “Glory.” Legend rounded out their speech by saying, “Selma is now, because the struggle for freedom and justice is now.”

But perhaps the most moving speech came from Graham Moore, who won for Best Adapted Screenplay for The Imitation Game.  He delivered a powerful message to all when he revealed he tried to commit suicide at the age of 16. “I tried to commit suicide at 16 and now I’m standing here. I would like this moment to be for that kid out there who doesn’t feel like she fits in anywhere. You do. Stay weird, stay different.”

Besides Common’s and Legend’s “Glory” performance, the other highlight of the night was Lady Gaga’s tribute to The Sound of Music, with a surprise appearance from none other than Julie Andrews. Gaga wowed in a white ball gown while singing a medley of classics from the film, such as “The Hills Are Alive,” “My Favorite Things,” “Edelweiss,” and “Climb Every Mountain.” It was a fitting tribute to such a classic and iconic movie, and Julie Andrews coming out at the end didn’t hurt, either.

In respects to the winners of the night, Birdman won big, scooping up the win for Best Picture and Best Director, as well as two other awards. The Grand Budapest Hotel also nabbed four wins, and Whiplash followed with three. The big surprise, however, was Boyhood getting shut out after nabbing Golden Globes for Best Drama and Best Director. Its only win was Arquette securing the win for her performance as Best Supporting Actress.

All in all, the night had its ups and downs, but the show could’ve been more exciting and less time consuming (Approximate run time was about 3 and half hours).  The telecast of the 2015 Oscars had the potential to be great, but managed to fall short.