The Magic — And Social Mission — Behind THINX Period Panties 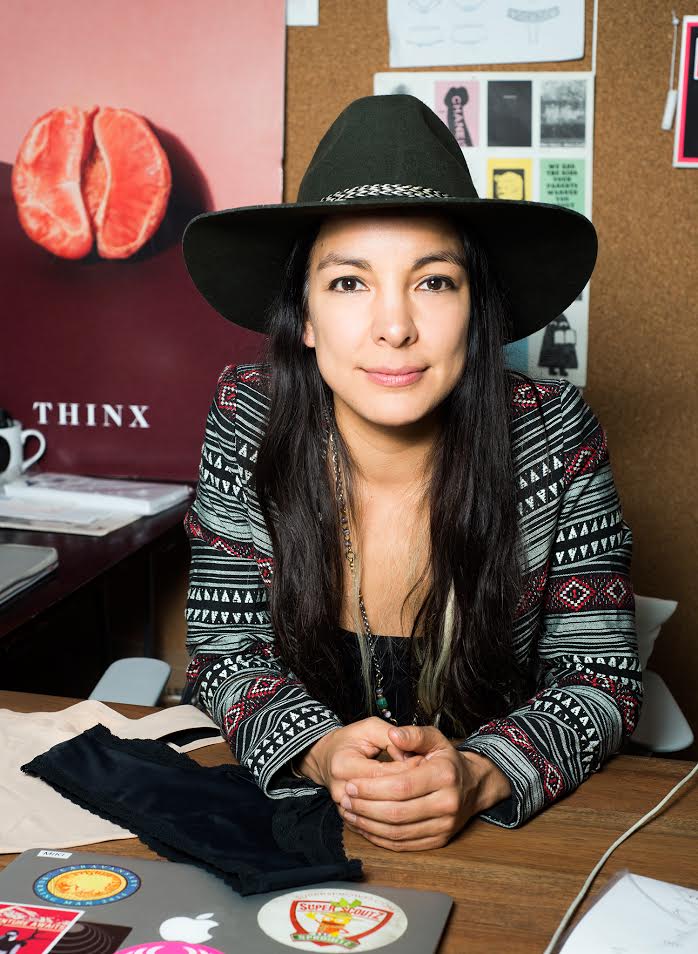 In case you’ve been too busy buying boxes and boxes of tampons to hear the news, THINX, the period panties that you literally just wear and then wash, are changing the menstruation game for the first time in decades.

Journalists around the nation—and the world—have taken them for test runs, penned commentary on founder Miki Agrawal’s feminist marketing strategy, and even Cat Greenleaf interviewed her in a bathroom stall for a segment.

Downtown couldn’t figure out how to corner her in a ladies room, so we did the next best thing and sent along all of the questions still lingering after a test run of our own.

When did inspiration for THINX first hit?

Miki Agrawal: The first Aha-moment for the idea was born in 2005 during our annual Family Games called Agrapalooza, where my sister Radha got her period in the middle of their championship race. We raced to bathroom to wash Radha’s bathing suit bottom — still tied together! –and through our frustration, we thought, “Wouldn’t it be great if we had a pair of underwear that was period-proof?” It was then our idea was born.

But it was another ten years before someone inspired you to actually take action….

MA: But the idea really got its legs when I travelled to South Africa in 2010 for the World Cup. There, I met a 12 year-old girl in a rural area. I asked, “Why aren’t you in school?” and the girl quietly responded, “It’s my week of shame.” Upon my return, we discovered that 100 million girls around the world miss school just because they lack the sanitary supplies they need to manage their periods. We knew that they could somehow use the innovative idea of magic period underwear to support these girls. And BOOM — THINX was born!

So it’s also a social movement?

MA: Yes! We get to educate people on what is going on around the world, even if they can’t see it first-hand, whether it be menstrual taboos that cause girls to drop out of school, the fistula crisis that is ruining women’s lives — and can be fixed — or the sanitation crisis that affects 40% of the world. To date, we have helped 30,000 girls go back to school.

Did you always see yourself going into the panty business?

MA: No, but if you look at my businesses, the two constants are that I get to address real taboos and give back in areas that I care about. I launched my first business, WILD — a farm-to-table gluten-free pizza concept — which has been open for 11 years now. I’ve also written a book called DO COOL SH*T. Most recently, we also launched THINX’s sister brand, Icon, which helps with light bladder leaks, and another company called TUSHY, which is a modern bidet attachment.

The website describes the technology behind the panties, but how did you first go about figuring out which technology to use in the first place? And how is it that such a thin layer of material is able to absorb two tampons’ worth of blood and not leak at all through the panties and onto your pants?

MA: We wanted to come up with something leak-proof and stain-resistant, so we combined four different technologies: anti-microbial, moisture-wicking, breathable leak-proof, and absorbent that work together to be totally period-proof. The absorbency layer and leak-resistant tech make sure nothing comes through the underwear if you have an accident, yet you feel clean and dry the whole time you are wearing them thanks to the anti-microbial and moisture-wicking layers. It’s like magic! Science-y, tech-y magic.

We do have to hand-rinse and then wash the panties, whereas we just toss pads or tampons in the trash. Do you think it may be hard for some women to come *face to face* with the sights and smells that come with this step of the process?

Let’s talked about the “grapefruit ad” debacle with the NYC subway system…you know, the one where the grapefruit literally just stands there being a grapefruit, but we all know it represents a vagina.

MA: We picked the MTA advertising guidelines apart to show that we were not only well within those guidelines, but there were countless examples of other ads that were far more “offensive,” “suggestive,” or “inappropriate,” like in breast augmentation ads…yet made it onto subway cars and into stations. When they didn’t approve our ads, we went to a press contact who wrote a story, which ultimately went viral globally! Later, the MTA stated that the ads would “of course” go through, and spoke as though they were going to all along, but that really wasn’t the case. Ultimately, a lot of people rallied to get it through in the press and on social media, and I think that’s what did it.

Do you believe this could also be the answer to the “sleep” crises? I know that whether it’s pads or tampons, I have lost many a favorite pair of underwear to “sleep-shifting.”

MA: Definitely! The Hiphugger is great to sleep in because the technology continues all the way up the back of the undies.

MA: Nope! We’re e-commerce only, and for good reason. We want to control the conversation completely between us and our customers. We want to make sure it’s always spoken about with our branding, voice, and distinct style in mind.

What would you consider a full cycle’s supply of THINX, how many pairs, and what would that cost, on average?

MA: I would suggest five pairs since I normally wear two pairs a day. The most expensive five-pair cycle set would be $161.50 and the cheapest would be $102.

What is the “shelf life” of a pair, before it starts to get worn or lose its effectiveness?

MA: THINX should last as long as any normal pair of underwear!