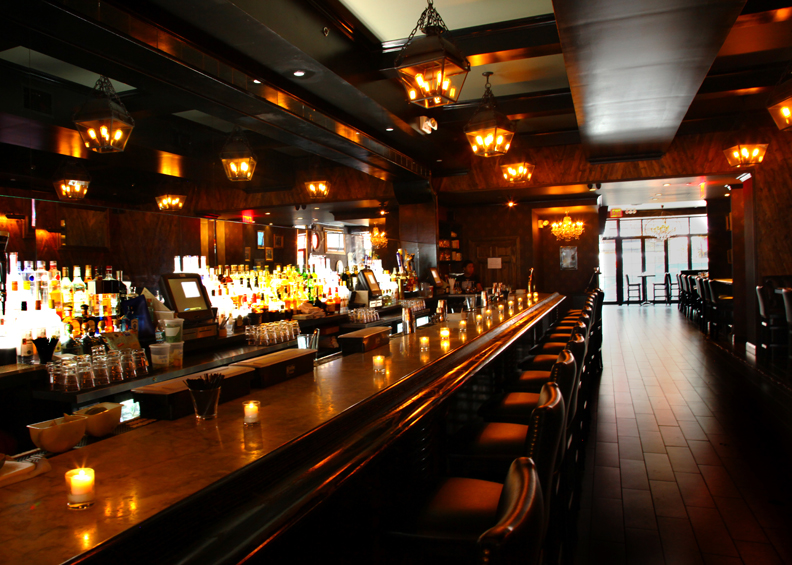 As the city is filling up with endless  sports fans to enjoy the Super Bowl, you might want to draw up a can’t miss game plan to score great seats…and treats for the game. Here are some of New York’s All Star locations  to catch not just an exciting game but excellent food and drinks as well.

Just up the street from the Seaport,  at 121 Fulton Street  they will be offering an open bar package for the entirety of the game, in addition to their signature Fulton shots for $7.00 (it’s a twist on a cucumber martini shot: vodka, muddled cucumber, lemon and lime and St. Germaine)! With lush booths and a huge bar, it’s one of the best places to watch the game!
121 Fulton Street, FiDi
121fultonstreet.com/‎

Dining Area down at Fulton 121

The Chester will host a Super Bowl party, complete with a Tailgate menu which will be a combination of passed hors d’oeuvres and food platters. For $70, guests can feast on The Chester’s famous candied bacon, nachos and more, and have their pick of specialty cocktails as this package includes open bar as well! Menu attached!

The dining Area at The Chester in Chelsea.

The Benjamin Steakhouse and The Sea Fire Grill will be giving a complimentary classic New York style cheesecake to those people who bring in their tickets/ticket stubs to show they will be attending the Super Bowl. The Sea Fire Grill, in addition to the regular TV at the bar, will be projecting The Super Bowl on a big screen.  For the entirety of the game, they will be offering All You Can Eat mini burgers, chickens wings, and fish tacos with an open bar to include wines, beers, and specialty cocktails for $150 per person.