Unsettling and Senuous Sleep No More 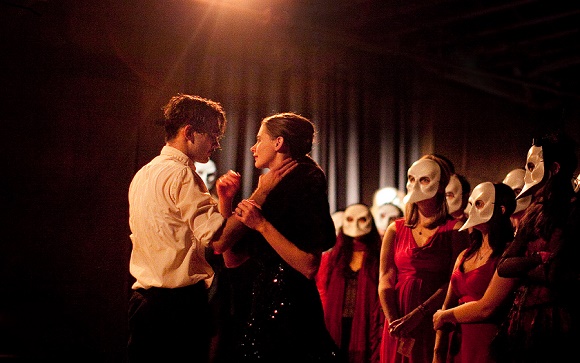 Masked audience members look on at the surreal events of Sleep No More.

The term sensory experience is thrown around a lot in the theatre world, and understandably so. Broadway and Off-Broadway shows can be deeply perceptive with their stage productions, and they can provide the audience with sensations that can’t be replicated in any other medium. So what happens when a production abandons all of the preconceived notions of theatre? When it loses the dialogue, the audience, and the stage?

Sleep No More is that kind of show; it shares very little in common with any other theatre production out there, giving the term ‘sensory experience’ a whole new meaning. Billed as “an individual experience,” Sleep No More doesn’t ask audience members to take a seat and witness a story unfold. Rather, the audience must go find the story themselves among the remnants of the fictional McKittrick Hotel. The story is loosely based on Shakespeare’s Macbeth.

Guests of the hotel (the audience) first walk into the lobby, where they are greeted by ghostly figures meant to represent hotel employees. Their pale skin, Transylvanian accents and vampire-like demeanor is only the beginning of the bizarre events that take place. Eventually, the employees lead you into an elevator to take you to the part of the hotel where the gravity of what’s about to happen begins to take effect.

Each guest is required to where a macabre mask while they trek through the hotel’s five floors of noir theatrics. With scenes that could be taken straight out of a Stanley Kubrick or David Lynch film, the surreal atmosphere engulfs the patrons in the grim surroundings. Each room traversed is filled with off-putting décor and oblique displays of the story are meant to be conveyed.

Periodically in your journey you’ll come across the production’s performers, identifiable as the only people without masks. Very little dialogue is actually spoken by the actors, but they engage the hotel’s anonymous wanderers through expressive dances and confrontations with one another. It’s up to the wandering patrons to decide which rooms to explore and who they want to follow on their excursion; whether it’s one of the villainous witches bent on debauchery, or one of the noblemen who get sucked into the enchantresses’ spells, there’s a unique perspective to be seen no matter what direction you walk.

Sleep No More is not a show for people with weak constitutions, nor is it a show for people looking for a traditional theatre event. The production features graphic depictions of ritualistic mutilation and sex, and the lack of story structure makes it difficult to find the meaning between the lines. The story is secondary to the actual experience, put on display without restraint. It would be incredibly difficult to see everything Sleep No More has to offer in one visit, but there is one thing that’s abundantly clear as soon as you walk in: there is no experience quite like Sleep No More in all of New York’s storied streets.