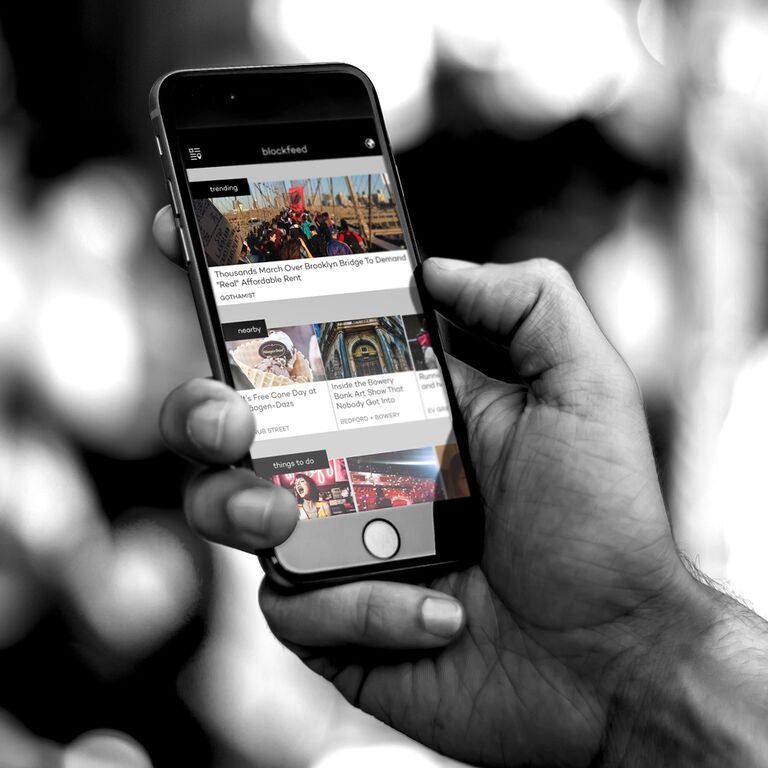 Photo: Courtesy of Adam May

As discussed in earlier editions of this column, the word “busy” is entirely relative and subject to interpretation. Some people call themselves “busy” because they have brunch plans and a full DVR of reality shows to catch up on. Other people are “busy” because their career demands them to be on-call and alert at all times. But however you choose to define the word “busy,” within the context of this column, it is intended to imply that a person is keeping occupied while doing things that many people ought to find interesting.

In the case of Adam May, editor-in-chief of Blockfeed, he may only have one job, but that job keeps his eyes and ears very active. Blockfeed is a New York City-centric app that tailors news stories to a user’s current location. In holding down this post, Adam processes hundreds of news stories every day. In turn, I wanted to know what it is like to be responsible for all of the news that a reader may ingest. Fortunately, Adam provided honest and direct insight during our chat about what it’s like to stay so current yet also so local.

Blockfeed, as it turns out, is aiming to expand beyond New York City as far as its geolocation-based news service. Adam went into more depth about that within our Q&A, but fortunately he was also open about the work he did with the IDF. Long story short, there’s lots to learn from both Adam May and Blockfeed.

It’s known that you manage the content streams and process over 600 stories a day. How do you usually find your content? Are there particular sources you rely on most?

Adam May: When we first decided to launch in NYC, we did a giant deep dive as a team, researching all the different sources of news in NYC: newspapers, magazines, local blogs, social media channels (including Downtown!). As we’ve been operating in NYC, we’ve stumbled upon more and more amazing resources. The best sources are often the local blogs. Maintaining a local blog is super-tough and rarely profitable — it’s always a passion project. And that passion translates into really excellent and dedicated journalism, even if it’s on a small scope. They usually manage to break all the coolest stories and viral occurrences in the City, you just may not hear about it unless Gothamist picks up the same story.

In reading so much content on a daily basis, have you become a speedreader?

A: Luckily, I was a pretty quick reader before all this began, but I’ve definitely gotten faster. Got to get those 10,000 hours in.

When you want to know what’s going on outside of work, which are the sites that you rely on most?

A: It’s kind of hard to separate, to be honest. I used to be a big magazine reader, I still have huge stacks of The Atlantic and GQ in my room. But these days, I try to keep up on the way that people continue to consume news. I try out new apps, new aggregators, try to keep my Twitter feed interesting. The way news is reported and disseminated is changing so quickly, makes it hard to stick to one publication. All that being said, I still get the New York Times delivered every morning.

Reading and work aside, what do you like to do with yourself?

A: My first paid writing job was about food, so I always loved cooking and eating far too much food. There was a day when I used to act and play guitar, but these days I kind of just smoke cigarettes and hang out with my dog.

Prior to Blockfeed, you worked as a journalist, director, social media director at a start-up, and as an editor for the IDF’s website. When someone asks you what you do for a living, how do you usually respond?

A: Great question. Honestly, it’s different for every circumstance. I mostly stick with “journalist” because it’s the easiest to explain, and sounds a lot less painfully millennial than “social media director.” Though it’s hard to miss a chance to shamelessly plug Blockfeed, so it usually finds its way in.

Did you always intend on following a career path that was uneasy to define in a few words? Or is that something that happened organically?

A: As organic as it gets. I actually always wanted something solid and stable that I could really devote myself to and turn into a career. But turns out I’m really restless, I just kept jumping from thing to thing.

Is there a field you haven’t yet worked in which you hope to?

A: I always wanted to be a scientist, astrophysics specifically. I have a mostly healthy obsession with science journals and have been known to go on long rants about the multiverse. Time might be running out for me though, I’m quickly approaching the age when most physicists burn out.

Having worked with them, what do you think the biggest misconception is about the IDF?

A: I think the biggest thing people don’t realize is how much of it is really run by kids. People who in this country are busy busting down Natty Lights and playing beer pong, in Israel the same kids are out in the field commanding troops, making huge decision that can occasionally have real geopolitical ramifications.

The IDF also makes an active effort to make a positive impact both in and out of Israel. There are units of the army dedicated to teaching underprivileged kids in poor areas, or to advocating for Palestinian civilians, or even an entire unit of reservists that’s on-call to respond to natural disasters around the world. I know some of it may seem like PR stunts, but it definitely isn’t for the people in those units, or the people they help. They really care.

Which of your prior positions trained you the best for your work with Blockfeed?

A: Definitely the IDF. It was the hardest, fastest-pace, most independent thing I’ve ever done with my life until now.

As Blockfeed is primarily New York-oriented at the moment, does Blockfeed have plans to expand to other cities?

A: Absolutely, we want to be in every major American city, one city at a time. But first, we’re going to start with nearby medium to large cities that have a vibrant culture and most importantly, a healthy local journalism scene. Think Boston, Washington D.C., Philadelphia, Chicago, and eventually we will tackle cities like L.A. and San Francisco.

How would a publication or organization go about getting added to Blockfeed?

A: There is a way to sign up on our website, www.blockfeed.com, or you can just email us at contact@blockfeed.com. We’re always happy to hear from local journalists. At the end of the day, we want Blockfeed to help them since there’s a symbiotic relationship there — the better local news is doing, the better Blockfeed is doing.

When it comes to productivity, are there any tools or apps you primarily rely on to stay on-task and meet deadlines?

A: This is probably the most low-tech area of my life. I’ve tried god-knows-how-many “productivity apps,” but they never stick. I still just use a notepad and pen. The most high-tech I get is a Google Cal to make sure I don’t miss my appointments. It’s shameful.

Switching off from productivity, when you are aiming to be creative as a routine, do you have a routine? A place you go to or an album you listen to most?

A: Music is always the best way I can change my headspace. I am a huge fan of This Is Happening by LCD Soundsystem, it’s good for just about everything but writing. For writing I always resort to something wordless, Idle Moments by Grant Green or The Earth Is Not A Cold Dead Place by Explosions In The Sky.

A: Learn how to drive before self-driving cars take over the world. It’s damn fun.