Pride at the Dogpound 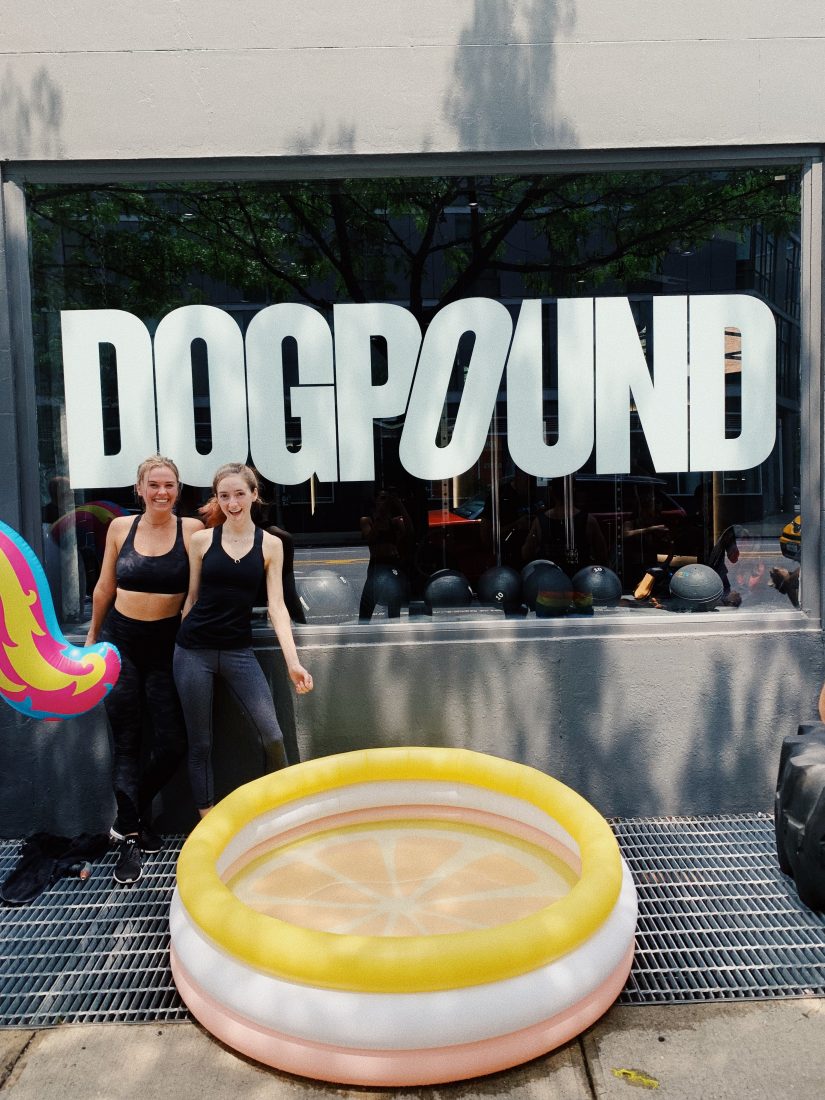 Downtown celebrated pride the sweaty way with Dogpound on Saturday at their New York City Pride Workout. Their iconic white logo turned rainbow for the day, filling the space with color on the gifted t-shirts that everyone wore during the workout. Beneath the usual high-intensity vibe in the gym, there was also a sense of empowerment and meaningful celebration in the air.

Kasey O’Brien and Caroline Krumm, friends of Downtown, attended the workout with us to celebrate the end of Pride Month and experience the Dogpound for the first time. “My experience at Dogpound was overwhelmed with love,” Krumm said after the workout. This was my own first time at Dogpound too, and I had the same feeling. The love in the room for everyone, including myself despite my novice athletic ability, was surprising and very welcome.

Downtown’s CEO and Founder, Grace A. Capobianco live-streamed the workout, followed on her laps through the gym as she cheered everyone on by her dog Barclay, the Dogpound’s first furry member and Pawblisher for Downtown Magazine.

“It was such a cool experience seeing all these people come together and workout to celebrate Pride and all different types of love. Definitely a day I’ll never forget!” O’Brien said, and it certainly was unforgettable.

Not only was it a vibrant and fun way to commemorate Pride Month, the workout also made a real difference; the proceeds from the tickets went to the Ali Forney Center, an NYC-based organization that endeavors to protect LGBTQ+ youths from homelessness by providing housing and tools to live independently. The organization is named after Ali Forney, a gender non-conforming youth who left home at age thirteen and ended up on the streets at fifteen. He was dedicated to advocating for homeless LGBTQ+ youth until he was murdered in Harlem in 1997. The Ali Forney Center has continued this mission with their Drop-In Center, which helps 1,400 homeless youth per year and provides 70,000 meals annually.

The workout kicked off with a few words from Jase Cannon from AFC, who spoke powerfully about the importance of the center and how meaningful the workout was for the organization. She shared afterward that the day raised $7,000 for the Ali Forney Center. “These amazing trainers opened up everyone’s bodies and hearts. I’ve never seen more smiles and sweaty bodies!” She said afterward.

The Dogpound is a steadfast ally to the LGBTQ+ community, especially because of founder/owner Kirk Myers’ brother Kip Myers, whose surprise wedding to his husband Patrick was held at the Dogpound’s New York City location. The gym is, and has been, a beacon of pride, for its closeness and accepting attitude and for its philosophy of wellness and positivity, and it really showed on Saturday. Alongside over fifty people coming from different backgrounds, ethnicities, and sexual preference, who didn’t know each other, that sense of closeness and acceptance held true.

The atmosphere was electric; the trainers encouraged each and every person in attendance with cheering and positivity, and who can go wrong when Lady Gaga and Prince are on the workout playlist?

To close the session, everyone participated in a guided meditation, led by Kundalini yoga teacher and trainer Amanbir Singh, based around embracing yourself and your personal goals, and feeling one with your body. Everyone raised their voices to chant along with the mindful mantras, a unified sound that gave me goosebumps. It was the perfect ending to a truly beautiful event, followed by a delicious lunch provided by Otto’s Tacos. Trainers and attendees mingled outside eating tacos, and there wasn’t a single face without a smile on it, despite the sweat and flushed cheeks.

The Dogpound’s new location in Los Angeles held its own Pride workout during LA Pride as well, but even if our West Coast readers missed it, head to the West Hollywood Dogpound for a session at an incredibly special gym.