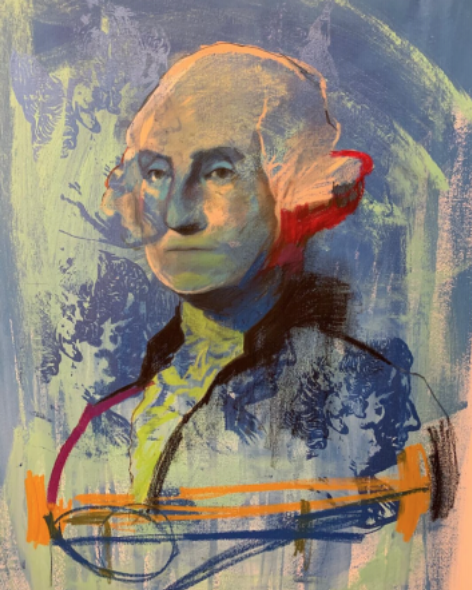 When viewed in concert with one another, Kane and Rodriguez create a cross-continental critique on the global rise of right-wing isolationist governments, wealth inequity, social narcissism. A host of other societal ills, all presented through the allure of a subtle, recognizable smile, dripped in bright colors and glitter.

Because Kane and Rodriguez address these underlying issues through characters associated with cultural ideals, rather than repeating the pervasive Trumpian or Boris Johnsonian caricature, their work goes beyond contemporary discourse and into the realm of the philosophical, re-examining the original intent of the political structures for which these figures are known.

A UK based artist, born in Australia, Heath has always been fascinated by the mix of creativity and art. Now turning his attention back to art, his collections of work draw inspiration from his commercial art background and origins of pop-art – a blend of design and art. His approach follows the practice of poster making and design, with a focus on creating simple, iconic, and memorable pieces. Within the artwork, he tries to distill subtle but often subversive themes.

Work included in this exhibition pull from two series. His large-scale “Portrait of Heroes” paintings are inspired by master Romantic-era portraits that reveal how classical art was often a means for wealthy individuals to portray their ultra-ego. It playfully suggests that the classical portrait artist was the photoshop and Instagram filter of their time, leading the artist to question: “Today we all have the ability to take selfies and live our lives through social media. But how much of what we share is real and how much are we all trying to heroize our lives?”

The original hand-detailed screen prints from his “Rich Enough to Be Batman” collection “raise  questions about wealth and social justice, through the idea that with enough money anyone can be a  superhero.”

Born in Havana in 1981, Walter John Rodriguez holds a studio in New York City. His love for drawing and painting developed at an early age in Cuba where he made every effort to learn artistic skills despite having limited resources. After immigrating to the U.S. his continued interest in art motivated him to seek formal art training graduating in 2002 with a B.F.A. degree from the University of the Arts in Philadelphia.

Rodriguez’s “Power Isn’t Love” series dives into the raw nerves of political discussion in the United States today, re-inventing well-known portraits of the American founding fathers through an updated, contemporary lens. Through these portraits, the artist incorporates accents of reassurance in the binding nature of our constitutional roots for a better society, while questioning faith in the inherent permanence these principles hold in today’s political climate.

In that sense, Rodriguez’s work is provoking a movement to understand all sides of the political spectrum. With close observance, viewers may feel empowered that a democracy like America’s has lasted over 200 years, but also encounter anxiety about the future.

The artist was most recently chosen for collaborations with “Inter Miami CF”; Miami’s professional soccer team owned by David Beckham and by the “Arsht Performing Arts Center” for “Hamilton” the play. He has participated in various art fairs across the United States such as “Art New York”, “Superfine” in L.A., and “Red  Dot” in Miami and also completed the Eileen S. Kaminsky Family Foundation (ESKFF) residency program at  Mana Contemporary in Jersey City.

His work has been included in multiple private collections and group exhibits in Florida, California, New York, and New Jersey. He is co-founder and director of Rexer Gallery in  Hoboken, NJ.

As four women with incredibly different backgrounds and areas of expertise in the art world, together they form a comprehensive services network researching collections,  curating exhibitions, handling framing and restoration, launching up and coming artists into major private and public collections, and training emerging art lovers how to acquire the perfect piece and install it beautifully on their walls.

Their dedicated exhibition space at 204 Bellevue Avenue in Montclair boasts museum-quality lighting, installation, and an outdoor courtyard, aiming to raise the bar for commercial art exhibition venues in  New Jersey.