Hilarious Romp in Pageant the Musical 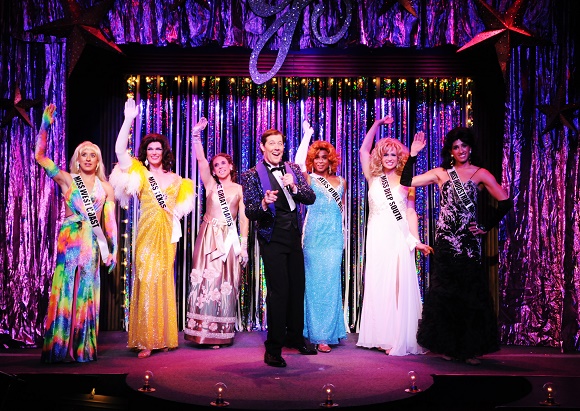 The cast of Pageant the Musical.

Beauty pageants have been characterized by many terms; some might call them the ultimate display of extravagance and elegance, and others might call them spectacles designed to reinforce the value of physical appearance and conventional beauty. No matter how you view the world of beauty contests, they have become a cultural institution, and their polarizing place in pop culture leaves these competitions subject to ridicule and parody.

Pageant the Musical flaunts every beauty contest cliché in the book. Satire on one hand and a celebration on the other, the vaudevillian show embraces every pageant rule in the book–with the exception of one major component: instead of young women competing to win the tiara, the musical features a cast of men in drag. The outrageous competition is undoubtedly the funniest beauty contest ever staged.

Alex Ringler plays Miss Texas in the production, and he said one of his biggest challenges in the role is not laughing at his hilarious fellow contestants while on stage.

“We’re all just having fun on stage and enjoying being up there on stage every night,” said Ringler. “It’s such a funny show to be in, and such a joy to be on that stage with those people.”

Six contestants compete for the title of Miss Glamouresse in a contest sponsored by the fictional Glamourous beauty product line. Pageant staples like talent, swimsuit and evening gown categories are showcased, all of which are performed with supreme dedication by the “women” competing. The contestants exude every pageant stereotype to hilarious fashion, from overacting with a plastered-on smiles, to shooting dirty looks at their fellow contestants.

Ringler said this role is not a normal drag-queen role, but rather, he and his fellow contestants are portraying actual women with their hearts set on winning.

“In the past when I’ve played drag roles it’s been a drag queen, and Miss Texas is supposed to be an actual woman who has been in pageants since she was a little girl,” Ringler said. “So in keeping that mentality of playing an actual female character who’s been in pageants her whole life, there’s a little bit of polishing tiara’s I have to keep in mind.”

Pageant the Musical makes audience participation an integral part of the production. Despite being a staged musical, this pageant relies on the decision of judges, five audience members selected by emcee Frankie Cavalier (John Bolton). So for every performance, a different winner may be selected depending on to whom the audience is drawn. Ringler said this keeps the performers on their toes for the unpredictable final moments of the show.

“We love it when the audience responds because it just livens us up even more,” Ringler said. “We always give our best performance but when we have an audience there and ready to laugh, and understands the wink and the nod of the show it’s really, really fun.”

Pageant the Musical is unlike any beauty contest you’ve ever seen. There’s not much of a story to be told, other than the normal pageant story we’ve all seen in Miss America and elsewhere, scored by the tongue-in-cheek idea all of the contestants are men. Every conventional pageant tradition is embraced, and at the same time gets turned on its head. The results are a funny burlesque-like show poking fun at the traditional beauty pageant, while putting on a compelling contest all on its own.