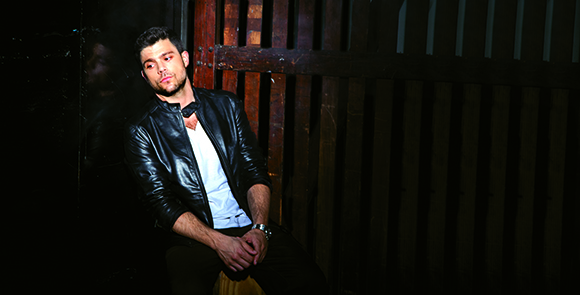 Entourage and Jerry Ferrara are back and he and his career are looking better than ever.

Known for his infectious portrayal of every dude from the old neighborhood, Salvatore “Turtle” Vacara in HBO’s Entourage, Jerry Ferrara has certainly emerged from his shell. It is safe to say that his fast-paced success and fast-food ventures have propelled him towards the victory line.

Ferrara radiates with charming modesty, and in light of his success, it’s hard to believe he has kept his ego in check. With his impending film releases and courageous business ventures, it is safe to say that this Brooklyn-born actor is well and truly at large.

Jerry recalls his youth in New York, when Downtown was a favorite getaway from his Brooklyn ’hood. “I always liked the vibe,” he told us. Today, Jerry’s affinity for Lower Manhattan has evolved into a profound appreciation. “I feel like people live [Downtown], as opposed to Midtown where people work there and then leave.” Jerry says, stressing the word live, as if to draw home the idea that downtown is a community, a place to work, and a place worthy to escape from after the slog.

All New Yorkers possess a certain aura, and Jerry’s is reflected through the eyes of each and every one of his deeply authentic characters. “It’s something that’s in you. If you’re born and raised here, you can’t just turn it off. It has influenced everything, every character for sure.”

Ferrara plays a funny-man role in Entourage, but don’t be fooled into thinking that if you know Turtle, you know Jerry. Turtle, quite obviously, goes everywhere Jerry goes, and there are glimmers of the character in Ferrara’s warm candidness and humorous persona.

During our interview, Ferrara self-consciously admits that people might be disappointed when meeting him. He worries that fans expect to cross paths with a zealous, extroverted Turtle, and instead are greeted by a reserved Jerry. But both combine to make up the real Jerry, the Jerry who exudes an air of gracious confidence that plays a vital role in his magnetic personality.

Jerry made it in Hollywood, the way most blue collar folks from Brooklyn do—by working hard. Like the character he plays, Jerry’s success stems from motivation, and a drive to make it big in Tinseltown.

Ferrara has never been under the illusion that his career can shift into cruise control, despite the momentum he’s built. Actually, it has always been quite the opposite. From the very start, Jerry’s drive was motivated by fear. It took five seasons of a hit show for his lens of achievement to come into focus. “It wasn’t because I didn’t think [Entourage] was any good,” he says. “But you know, it was out of superstition, I didn’t want to think it would be any good so it wouldn’t get taken away,” he told us fervently. “It wasn’t until season five I was able to say, ‘Okay, we’re going to be here for a while.’” [Continues]

Jerry Ferrara is featured in DOWNTOWN’S Summer 2014 edition. Read the whole interview in our latest issue on newsstands now! Or subscribe to DOWNTOWN Magazine for home delivery by clicking here.