Horchata: Spice Up Your Evening Downtown 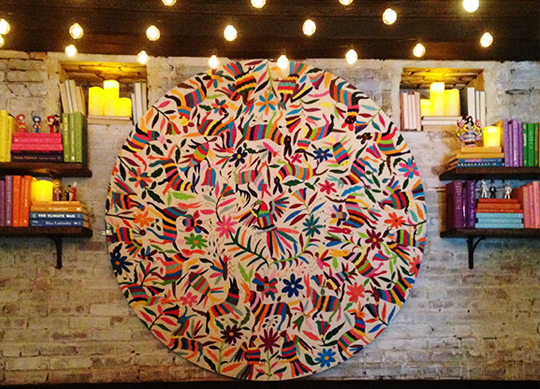 The much loved BLT Burger on 6th Avenue has made a smooth (and delicious) transition through the deep south and all the way to Mexico. Horchata has taken the burger, flipped it on its head (no pun intended) and has matured in the tender 3 weeks of opening up to become an intimate, yet youthful, hang out in Midtown. Oh, and the food is good too!

Mexico has been devotedly entwined into every part of Horchata, from the ornaments perched on the shelves above the diner’s heads, to the authentically upholstered benches. Colors pop from the plates to the walls. The restaurant is a long way off traditional and, frankly, it wouldn’t work in any other way. The atmosphere and the thrill of the taste seemed to ride on a humorous undercurrent that lifted the restaurant into a playful territory that even the most salmon soul would relish. Happy hour was booming, drinks and laughter were flowing. The accumulation of the contented crowd and the clinking of our cutlery harmonized to form a palliative soundtrack to the sit down meal.

The names of the dishes have a cheeky enticement to them, creating unique stories in of themselves. Check out the menu here. We found ourselves analyzing the menu, thinking of connections between the words before we even began to choose, making the all-important menu decision even harder. The waiters seemed to absorb the humor of the menu, mirrored in the energetic service and can-do attitude. Nothing seemed out of reached, no dish seemed unknown to our waitress, who could confidently talk about each plate we were served in astounding detail, to the point that there were no nasty surprises once it came to the all-important tasting.

Our portion sizes were ideal, not enough to overwhelm, just enough for you to walk away without craving a snack. The Brussels Sprouts Taco was suggested to us because it had proved to be one of the most popular dishes the restaurant since opening 3 weeks ago. It wasn’t hard to see why! The flavors in the taco were perfectly balanced. The poblano chilli gave the taco a pleasant punch, but didn’t set our mouths on fire. So not the best choice for the dare-devils or meat-lovers of New York. The nachos were tasty, especially when complemented by the atún “Chino / Latino” ceviche, made with soy, serrano chile, and kaffir lime leaf.  However, the ceviche proved to be too salty to be eaten on its own, or in large amounts, as a ceviche typically should. That said, the Tinga De Pollo Quesedilla left us without any qualms and left us delectably fulfilled.

Portions are small enough so diners can enjoy dessert too. We sampled the aptly named Horchata Flan. Like many of the other dishes the restaurant has to offer, their signature flan is embellished with a twist; a scattering of strong cheddar on the top.  We like their ambition, but this twist was a bit too cheesy for us (in both senses of the word!) If the cheddar had remained with its savory counterparts, the flan would’ve been just perfecto!

Hungry? Craving a taste of Mexico? Head down to Horchata on 140 6th Avenue to add a little spice to your evening!