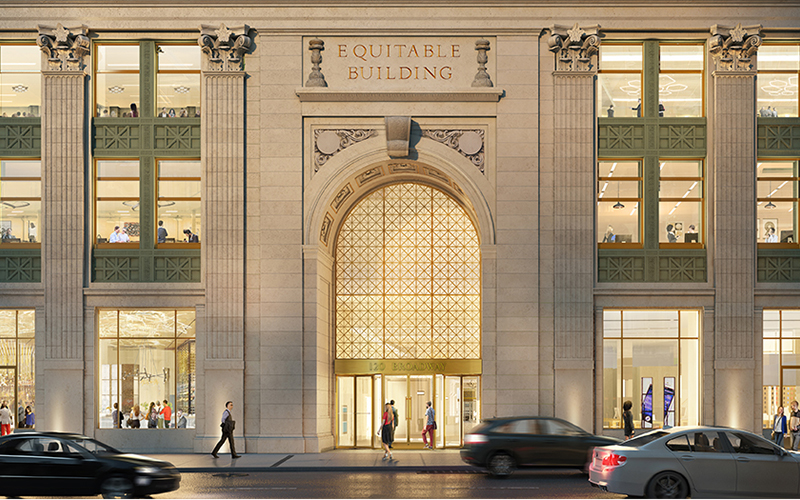 With the continued renaissance right here in the birthplace of New York, Downtown just keeps getting better!

For 300 years Lower Manhattan has dominated the city’s economic life. At the start of the 1920’s this area took a detour to midtown. Fast forward after the September 11 attacks, Lower Manhattan was as at its lowest point. Shortly after, an article written by the Wall Street Journal quoted Larry Silverstein as saying that he felt a moral obligation to rebuild. “The city is not dead and can’t be allowed to die,” he said. “We owe it to our children and to our grandchildren.” His words ring true each and every day as we witness and enjoy Lower Manhattan’s trendy booming population, manicured neighborhoods, economic renaissance, and the arrival of new and exciting commercial properties.

In 1985 Silverstein Properties purchased 120 Broadway. Today 25 years later, 120 Broadway is returning to its original grandeur, offering soaring vaulted ceilings, gold leaf accents, marble floors, and hand-carved architectural detail, it has been an icon of classic style for over a century. This Beaux-Arts masterpiece, located in the heart of Lower Manhattan, is widely considered Downtown’s original symbol of power and stature. Now, the property is set to undergo a series of major capital improvements by Silverstein Properties.

This endeavor will focus on restoring the building to its original grandeur.

120 Broadway was designated a National Historic Landmark in 1978. New York City landmark in 1996. It was restored in 1983–90 by Ehrenkrantz, Eckstut & Whitelaw. Peirce Anderson as the architect-in-charge completed the building in 1915. At the time it was the largest office building in the world by floor area. This building was built to be the headquarters of the Equitable Life Insurance Company.

This site had previously been intended in 1906 for a 62-story tower designed by Daniel H. Burnham, but the project had been postponed. When the Equitable’s previous headquarters, the Equitable Life Building was destroyed by fire in 1912. 120 Broadway was chosen as the location for its new headquarters building. It was originally intended to be 40 stories high, but it was reduced by four floors on the advice of consulting engineer Charles Knox, who determined the lower height as being optimal for its elevators.

Tenants will experience modern luxuries, including – rooftop terrace, tenant lounge & cafe, and for the many NewYorkers who ride to work, a bike storage with locker room & showers. New elevator cab finishes, turnstiles going into the elevators, retail renovation and activation, and a grand entryway are some of the planned updates.