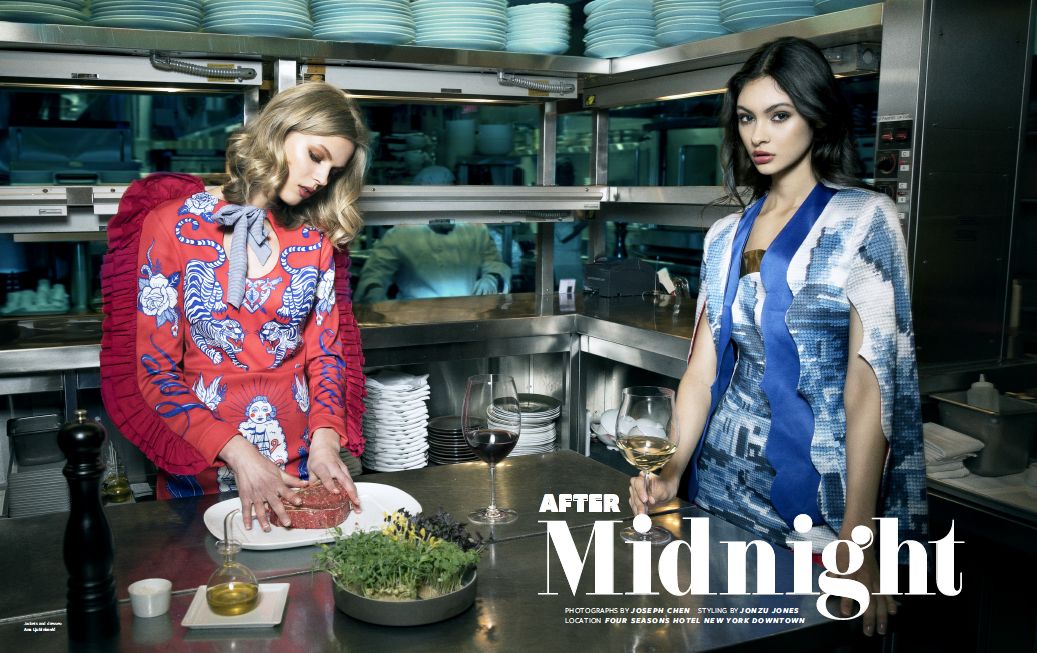 With Lower Manhattan quickly becoming a thriving culinary destination, it was befitting that we focus on celebrity chefs Wolfgang Puck, Jean-Georges, and Tom Colicchio.

In 2016, Tom Colicchio opened an American restaurant in the Beekman Hotel a beautiful historic space —1883 landmarked building that has many of its original architectural details. Temple Court 5 Beekman St., New York.

Jean-Georges Vongerichten and his partner Phil Suarez will open a market, in the historic Tin Building next to Pier 17. The 7,300 – square-foot restaurant and market will feature locally-sourced, organically grown products as well as authentic and accessible prepared foods and merchandise. Jean Georges will be in good company with both David Chang and Andrew Carmellini coming soon, with restaurants in the South Street Seaport.

Wolfgang Puck made his first restaurant debut in New York choosing none other than downtown, with Cut located in the luxurious Four Seasons Hotel New York Downtown a block from One World Trade. Cut offers a beautiful cocktail lounge/bar, cutting-edge interior decor by French designer Jacques Garcia with a sophisticated ambiance, extensive wine list, and the best steak downtown.

Wolfgang opened his first restaurant California Spago—Italian slang for spaghetti—in 1982. In the ensuing years, he would capitalize on the success of Spago by opening other places across the U.S. Puck has also opened casual eateries, written cookbooks and starred in Wolfgang Puck, a TV series on the Food Network.

Michael Law Director of Marketing for the Four Seasons Hotel New York Downtown, started the evening introducing our CEO Grace A. Capobianco gave a charming speech in gratitude to our guests, advertisers, her team, and Downtown’s ever supporting Chairman of the Advisory Board, Dara McQuillan of Silverstein Properties. The talented editor-in-chief, Deb Martin, was also introduced to our guests as she starts her new position with the Downtown brand. The night was important for these ladies, as we recognized all of the hard work they put into Downtown to make it a success.

This room is perfect for any event, with its tall windows giving light, and showcasing views, to our guests.

This night was a true celebration of Downtown and how far it has come over the past 8 years. We would like to thank all those who attended and made this night complete. We would also like to thank each and every reader, and the advertiser who continues to support our efforts and over 165 guests shared in this celebration.

Our Spring Culinary issue will be on newsstands May 29th. We hope that you will pick up a copy at Barnes & Noble. It is truly one of our favorite issues to date, and it has a little something for everyone.