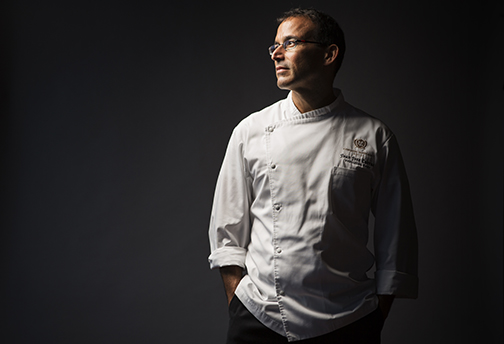 Puerto Rican Chef Juan Jose Cuevas has had an extraordinary career since graduating from the Culinary Institute of America. From three-star Michelin restaurant Akelarre in San Sebastian, Spain, to working at The Ritz-Carlton in San Francisco, El Raco in Barcelona, and Essex House in New York City, Cuevas’ storied career is beyond impressive. He’s worked with renowned chefs such as Alain Ducasse and Christian Delouvrier and earned Michelin stars at various restaurants including at the Pluckemin Inn in Bedminster, New Jersey. Today, in his most important role as the Executive Chef of 1919, Cuevas is steering the Condado Vanderbilt Hotel’s flagship restaurant in San Juan, Puerto Rico to inimitable status. Cuevas’ triumphant return to Puerto Rico comes at an opportune moment for the island. With his dedication to using only locally-sourced products, the chef is not only producing mouthwatering dishes but helping to provide a sustainable environment for the local farms while promoting the farm-to-table movement in Puerto Rico.

Downtown: What is the first memory you have of wanting to be a chef?

Chef Juan Jose Cuevas: My first memory was working in restaurant when I was 16 years old. I was fascinated by the drive and energy in the kitchen. Then, when I was 17, I went to a fine dining restaurant and fell in love with how things were done.

Downtown: What are the colors, smells, and environment that most take you back to that first moment of realization of how food can bring people together?

JJC: That moment occurred later on in my life when I moved to San Francisco. There, I saw, smelled, and touched everything at the farmers market. I saw how they set the stage at Chez Pannisse and saw how people in and out of the kitchen at restaurants live every moment caring for the others, how food brings people to share at a table, and into a conversation.

Downtown: What are some of the experiences that have most shaped you as a chef?

JJC: I have had several great opportunities that have helped shape me as a chef. Each of them contributed in different ways.

I also read Lulu’s Provencal Table early on in my career. It opened my mind to a world unknown to me. It cemented in me a passion for cooking, including the smells, sounds, and the beauty of the rustic environment and food.

Downtown: You commenced your career in a three-star Michelin restaurant in San Sebastian, Spain. Besides the location, which is a culinary haven, that is a mind-boggling beginning. How did that come about and what was the experience like for you?

JJC: It was a phenomenal first job! It was my first time in a kitchen of such a high level. There were so many cooks, and so much respect for everything, with an almost military type of precision and organization. It all began because I was lucky enough to meet Pedro Subijana, the chef/owner, in New York one day. I helped him as a translator, and after that, he asked me if I wanted to work with him in San Sebastian.

Downtown: In all the places you have worked, the Ritz Carlton in San Francisco, the El Raco in Barcelona, and Essex House in New York City to name a few, has there been a unifying experience for you? How were they similar and how were they different?

JJC: They were all similar in the following:  a respect for the ingredients and technique. There was PASSION. There was not that much difference between them besides the obvious – different types of cuisines, etc. But the love and passion in each kitchen was the same. The Ritz was a smaller team so we became a family. Essex House was a big team, each person was chock-full of experience and it was a melting pot (there were Parisian, Monacoian, Canadian, American, African, and Corsican cooks, as well as myself, from Puerto Rico). El Raco was very personal, we all lived there and we shared so many hours together. Santi was a gourmand and he transmitted his love of food to us.

Downtown: You have worked with incredible chefs throughout your career, Alain Ducasse and Christian Delouvrier among them. What is a trait you have most learned to admire in the kitchen?

JJC: A respect for ingredients. To use all your senses: smell, touch, sight, sound, and taste. To let the ingredients dictate their course.

Downtown: What is one of your biggest accomplishments as a chef?

JJC: I am very happy with my career. Here are a few moments I am proud of:

To see the light in my daughter’s eyes when we share a conversation about food, wine, and restaurants makes me feel accomplished. I see she shares the passion and love I have for cooking and all that comes with it, and that means a lot to me.

Downtown: What drew you back to working in Puerto Rico?

JJC: The opportunity to return came with The Condado Vanderbilt Hotel’s 1919 restaurant. I always wanted to return, but the opportunity had never appeared.  I love Puerto Rico, so when Jose Suarez (President of International Hospitality Enterprises), approached me to do it, I did not hesitate to return. Now, is our turn to put PR on the culinary map!

Downtown: What do you most love about your role as the Executive Chef of 1919?

JJC: In the six years since I have moved back, it is gratifying to see how much impact I have been able to have on the local farming, agriculture, and economics. To know that I can and have helped in the development of culinary ideas on the island is supremely important.

Downtown: How often do you create a new menu at 1919, and what is your approach to creating the regular menus and the tasting menus?

JJC: We change the menu four to five times a year. My approach is simple: let the ingredient speak for themselves. We are always in continuous conversation with our local farmers to develop our menus. As for the tasting menu, we always begin light and simple and slowly gear up to more complex combinations: from barely touched to substantially enhanced in flavor.

Downtown: Can you give us an example of some of the unique dishes you currently have on your tasting menu?

Downtown: What is one of your staple dishes?

JJC: A light fricassee of vegetable that we call Pistou. It is a complete vegetarian fricassee made with different vegetable juices, oils, and a pesto created from different herbs and vegetables.

Downtown: Tell us about the farm-to-table movement in Puerto Rico! How has that affected what you place on your menus?

JJC: The farm-to-table movement is growing fast; it is how I created my menus before I moved to PR, and once I moved back, it is what commanded the development of our menus.

Downtown: What would you like people to know about 1919?

JJC: I am in love with 1919! In the preparation of the ingredients used for each dish, the intention is to bring the flavors forward without distraction. Our aim is to obtain clarity in taste and presentation so that the guests can fully realize the essence of the products used. In addition, we choose ingredients that will provide maximum nutritional sustenance.

Our emphasis is on freshness and purity of ingredients. To capture the highest level of flavor, the ingredients are used in season, in relation to the time of harvest. Our methods highlight the importance of knowing our suppliers, from farmers to fishermen. My signature cuisine abandons the traditional use of meats and creams and instead presents the intense flavors and textures of vegetable juices, fruit essences, light bouillons, and herbal vinaigrettes.

It is a restaurant characterized by a contemporary kitchen with a traditional base that caters to seasonal products. We embellish dishes with flavor through the points of cooking, the textures and raw materials are of great quality. Our tasting menus stand out, especially where technique and classic recipes are married in each dish.

Downtown: Tell us about 1919’s wines. What your process in choosing the wines and vintages for your pairings?

JJC: Our wine list is very diverse with a big influence from Spain and California. Our wine pairings follow the same process as our food – they go from light/simple to more complex/robust wines. During the day, we taste different wines to decide which one will go better with that day’s menu.

Downtown: What are a couple of your favorite pairings?

Downtown: You have a superb team! Tell us a bit about them!

JJC: Carol Reyes is our chef de cuisine at 1919. She has been with me since we opened. She is super demanding, organized, has great knife skills, and is incredibly committed.

Downtown: What do you most enjoy about 1919’s location in the Condado Vanderbilt?

JJC: Condado Vanderbilt brings prestige, elegance, and finesse to 1919. The Condado area is busy, lively and close to everything. It is the best location to stay if you are in San Juan, PR.

Downtown: 1919, the Condado Vanderbilt, and the culinary movement in Puerto Rico are incredibly impressive. What would you like tourists to understand about your island and what it has to offer?

JJC My island is gorgeous, it has great beaches, an amazingly lush Rainforest (El Yunque), a great night life, and a historic city. Our food is bold, flavorful, and diverse.

Downtown: What can we expect from you and 1919 in the next couple of years?