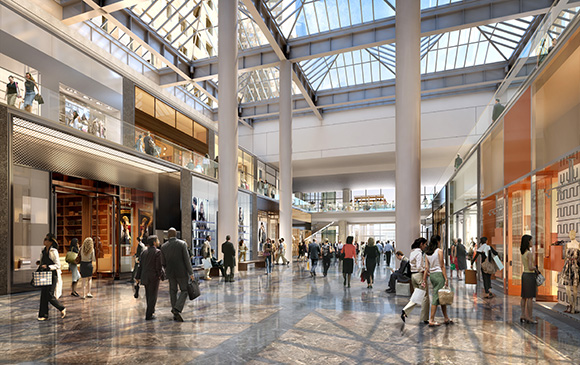 Lower Manhattan has recently been experiencing a retail boom with the expected openings of the Fulton Center Mall, South Street Seaport and the World Trade Center Oculus Shops. Leading the way of these commercial hotspots is the soon to open Brookfield Place.

The towering waterfront office complex that faces the Hudson River on 200 Vesey St. has already lured in luxury brands such as Michael Kors, Diane von Furstenberg and Paul Smith to list a few. Though regardless of how many high end fashion commodities Brookfield Place will provide, it is important to mention that fine dining and exercise aren’t far behind.

For the dining experience, one of Brookfield’s signature destinations will be Le District, a French response to Eataly, the high-end supermarket with a settlement in the Flatiron District. Le District, owned by restaurant tycoon Peter Poulakakos, will be divided into “districts”: a restaurant, café, market, and garden area. It is expected to open late this year.

Next on the list of dining is Hudson Eats, a dining terrace which will feature 14 high-end counters that will seat up to 600 diners. Such eateries will include L.A.’s own Umami Burger, Dos Toros Taqueria from Brooklyn and Blue Ribbon Sushi. Alongside the casual food places, critically acclaimed chefs Jean-Georges Vongerichten and Jose Garces are planning an opening of world class restaurants each in the same location.

If you think you outdid yourself with lunch or dinner, an Equinox gym has been announced to open in the building this Fall if you wish to attend yoga sessions or cycling classes. Food and exercise aside, The Institute of Culinary Education (ICE) has inked a slot in Brookfield Place as well as Bright Horizons Family Solutions opening a child care center.

Let us not take away the spotlight from the retail giants that plan to make Brookfield Place the most extravagant of shopping centers. Starting the list is Saks Fifth Avenue, which announced earlier this year the opening of their second flagship store at this very commercial center. Following the list are Italian powerhouses Ermenegildo Zegna and Salvatore Ferragamo, England’s finest, Burberry, and Hermes, the iconic French line. These and many more will be the tenants to promptly occupy space in New York’s newest fashion Shangri-La.