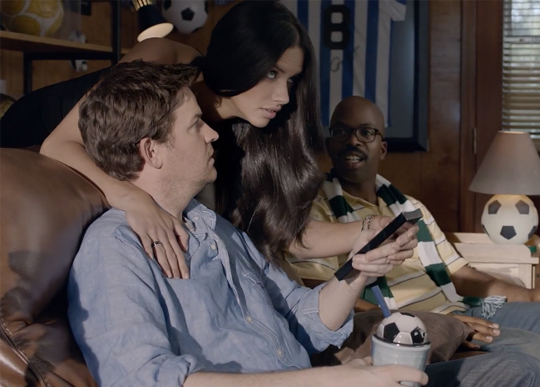 As the World Cup gears down and the stage is set for the match that decides the world champion, we must also give credit to the avalanche of ads for sticking in our heads with their creativity and catchy one liners. The results are in; these are five of DOWNTOWN’s favorite commercials from the 2014 Brazil World Cup.

It’s a well known fact that most Americans aren’t as big soccer fanatics as the rest of the world, a small detail Kia uses to their advantage for a clever ad. Adriana Lima trades in her Victoria Secret angel wings to serve as the KIA ambassador introducing American men to the sport of fútbol. By the end of each ad, she suggests, “For one month, let’s all be fútbol fans”.

If you’ve been following the World Cup, you’ve been tuned into ESPN either at home or on the go. The station creatively demonstrates how the world, no matter the time difference, looks forward to watching their brothers leave it all on the soccer field in hopes of bringing home the trophy.

More like a mini-movie than a commercial, Nike employs the whim of animation to tell the story of an outside threat to the game of soccer. A big theme in this commercial is “perfect is boring”. It takes a super team of the world’s best players to defeat an army of perfect players and restore soccer to its glory.

Volkswagen lightheartedly compares their new Golf to the movements of a soccer player. Using a well-known sports commentator, the finesse of the car is praised earning itself the praise of a GOOOOOOOOOOOL!

Pepsi | Now Is What You Make It

Music binds us together. It transcends culture and tramples language barriers. This Pepsi commercial starts simple, the opening of a can. That identifying sound lays the foundation to the beat of the song that develops as the commercial continues. Janelle Monae jumps in with a cover of David Bowie’s “Heroes”. The music swells as more instruments and sounds enter the song and more voices accompany Monae’s. The festive mood that develops from the act of opening the can demonstrates how easy it is to have fun when its the World Cup and soccer has united the world in pursuit of one triumph.