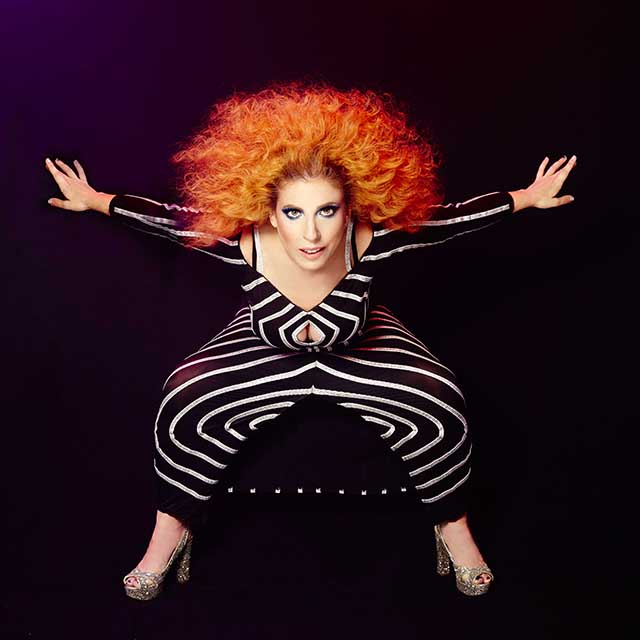 Me & Mr. Jones: My Intimate Relationship with David Bowie is writer/performer Raquel Cion’s homage to the music icon’s artistry and his humanity, and to her own lifelong Bowie “soul love.” In her 90-minute cabaret performance at Pangea (178 Second Ave., New York), Cion takes us through her highs and lows, bracketed by David Bowie’s music, his life, and his death, told with humor, emotion, and passion. She describes her youthful misadventures growing up in Connecticut, her relationships, and her battle with breast cancer, and connects all of those things through the words and mysticism of an artist who meant so much, to so many.

The New York Times described Cion as “half witch… half cabaret performer,” and she lives up to that accolade. She is not an impersonator, or a cover artist. She seems somehow to embody the very spirit of David Bowie, the ultimate shape-shifter, the master of multiple personas, and the creative genius who challenged every single idea in the world of art, performance, music, and beyond.

Cion weaves her own story into the Bowie timeline, finding parallels with wry humor, sharing her pain, and her joy. She quotes Bowie, “I’m a born librarian with a sex drive,” and reveals that she is, in fact, a librarian. After the artist’s untimely death from cancer in 2016, Cion was diagnosed with breast cancer, and while being treated with radiation, she discovers that her tech’s name is Aladdin, like the Bowie alter ego, Aladdin Sane. She notes that during treatment she was a block away when Bowie’s art collection was auctioned off by Sotheby’s. She delights in the fact that her home in Brooklyn is in the same zip code as the Brooklyn Museum’s massive David Bowie Is retrospective, and slyly reveals that she found an error in one of the displays. Naturally she sought out the curator to inform him.

Cion is a true Bowie fan but this show is so much more than just a true fan’s tribute to a great artist. Her experience will resonate with anyone who has ever taken solace in music, with anyone who has been considered “other” in any capacity. It is a tale of love, and of finding something meaningful in a world that can sometimes work hard to strip away the meaningful things. Cion’s performance is theatrical and unapologetically emotional, and while the show is seen through the mournful lens of the death of David Bowie, it is also delivered with a spirit of joy, and a lesson about cultivating and celebrating individuality.

Me & Mr. Jones: My Intimate Relationship with David Bowie will return to Pangea on Friday, February 21 and Saturday, February 22, and again on March 13 and 14.