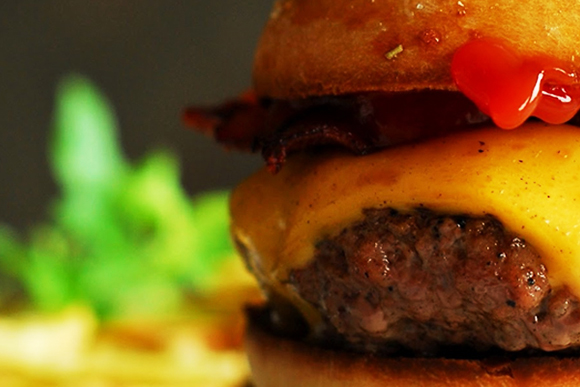 After a long night out of partying and drinking, or exploring the phenomenon that is New York City, it’s easy to get caught up in the fun and forget to eat. But when the moon is high in the sky and all you want is an all-American burger, where do you go for the best burgers in Lower Manhattan?

Of course there is always Shake Shack or Five Guys Burgers and Fries. These eateries never fail to satisfy our taste-buds, but you’re in the greatest city in the world; go on an adventure and introduce your palette to a new sensation of flavor. Break free from the chains (of restaurants) and open yourself up to a whole new world of burgers.

So now the question remains: where you would go for a decent burger after midnight if you’re not in the mood for the familiar? Do you wander around the city begging restaurants to leave their doors open just a little longer so you can indulge in sub-par food that is no longer fresh? Certainly not, but don’t fret. We got you covered. Here are the top 5 places to go to for a burger after midnight in Lower Manhattan.

1. Fanelli’s. SoHo.  A restaurant older than the neighborhood it is in? That’s classic, and so is their Bison Burger, according to rave reviews. Notable mentions also include their veggie burger and their cheeseburger. Classic meals for a classic restaurant. 94 Prince Street. Open until 2 a.m.

2. The Spotted Pig. Greenwich Village. Arguably one of the best burger joints in this part of town, The Spotted Pig boasts a stellar reputation and is critically acclaimed by New Yorkers and celebrities alike. That is not surprising since the restaurant is co-owned by Jay-Z, Bono, and Mario Batali. There is plenty to be excited about from this eatery. 314 W 11th St. Open Until 2 a.m.

3. Public. Nolita. With a menu ranging from delicacies such as the Australian Lamb Osso Buco Braised in Achiote Apple Cider to Black Pudding Waffles, this restaurant might not seem like a typical burger joint, and that’s the point. Public is anything but typical, and so is its burger. The Grilled Venison Burger on a Miso Bun offers classic comfort with a luxurious twist. No matter what you decide to order, there is no way you will want to miss this gem in Nolita. 210 Elizabeth St. Open until 1 a.m.

4. Mudville 9.Tribeca. If you are easily overwhelmed by options, then do not go to Mudville 9. This eatery does not simply offer one or two burger options, but instead they offer a Build Your Own Burger Bar. After all, this is a restaurant that boasts “quality food, endless eating.” The only problem you’re likely to encounter with this restaurant is deciding when you have had enough. 126 Chambers St. Open until 2 a.m.

5) Walker’s. Tribeca. Walk up to the big red door that opens into Walker’s, your new late-night destination for a solid meal. Go ahead and get a burger, an 8 oz Sirloin burger that is. A burger that tastes like steak in a restaurant that is the “neighborhood regular” is certain to be a memorable experience.  Better yet, Walker’s is open into the wee hours of the night so there’s no rush to leave. 16 N Moore St. Open until 4 a.m.