Winterland to Open at Seaport 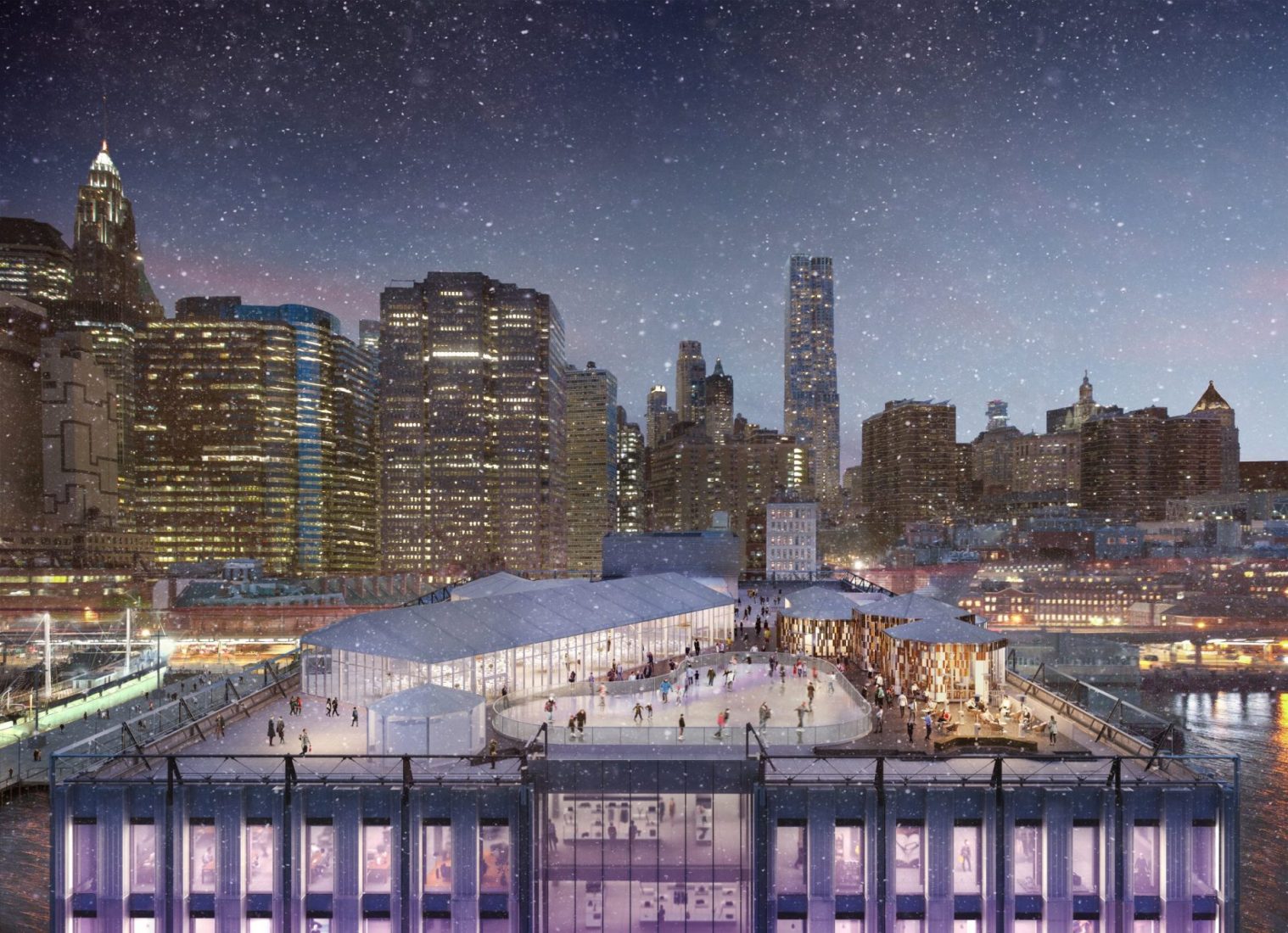 The Seaport Downtown New York is off and running. Following the success of Seaport Summer 2018, The Howard Hughes Corporation announced that they are unveiling their 2018 Seaport Winter Programs. This year is the first year with their new Rooftop, hosting events, activities and entertainment programming taking place throughout the winter season at the Seaport District. New Yorkers and visitors alike will soon be able to experience The Rooftop at Pier 17® Winterland, the new seasonal installation designed by the acclaimed architecture and design firm Rockwell Group, featuring the city’s first outdoor rooftop ice skating rink.

Downtown’s team is already lacing up their skates and pulling out their warmest clothing.

Visitors of all ages will be able to experience The Rooftop at Pier 17 Winterland starting mid-December, with The Winterland Rink opening to the public for the season on December 15. In addition to New York City’s first outdoor rooftop ice rink, the new winter destination will feature the Seaport District’s new rooftop restaurant and lounge R17; Skyline Hall, a 1250-capacity rooftop community and rentable event space; and Tank, a rooftop warming hut offering seasonal drinks and casual bites—all set against panoramic views of the Brooklyn Bridge, Statue of Liberty, East River, and the Empire State Building.

Hey, New Yorkers, no time to travel to a beautiful winter resort? No problem; the Award-winning Rockwell Group has designed an ultimate escape experience and a reprieve from the city. Guests will be transported to a Nordic ski resort with views of the stars, warm wood interiors, hearths, and Adirondack chairs. Sign us up!

On Monday, December 3, they will kick off Seaport Winter 2018, with a Seaport District Holiday Block Party, taking place along the cobblestones. Everyone is invited!

Join the Downtown team to celebrate the holiday season with free hot chocolate, treats and drink specials from the Seaport eateries. Enjoy musical performances, the lighting of the Christmas tree, and be sure to be on the lookout for Santa’s helpers giving away holiday cheer, with gift cards from $10 to $1,000.

Holiday decorations will be based on the illustrations by American artist Kris Ruhs, who has created the visual identity for the iconic Italian concept store 10 Corso Como around the globe, including 10 Corso Como’s only U.S. location. Ruhs has created original, vibrant illustrations which will serve as a public art display along Fulton Street, featured on 300 ornaments adorning the Christmas tree, and on 30 discs up to 10 feet in diameter decorating the façade of the Garden Bar.

“We are excited to introduce Seaport Winter 2018, a new season of community-oriented activities and programming for all New Yorkers to enjoy,” said Saul Scherl, President of the New York Tri-State Region, The Howard Hughes Corporation. “We are committed to providing a year-round amenity for local residents and visitors, and look forward to bringing everyone together to celebrate the holiday season and the highly anticipated opening of The Rooftop at Pier 17 Winterland.”

Why wait, be sure to order memberships and packages to the ice rink www.pier17ny.com starting December 3. Local neighborhood residents, you will have access to a special ice skating discount. Sounds like its Christmas already!

Throughout the winter season, visitors will be able to take skating lessons, learn how to curl, play broomball, or even participate in outdoor fitness classes.

“We conceived The Rooftop at Pier 17 as a completely new, elevated frame for the Seaport and the waterfront,” said David Rockwell, founder, and President, Rockwell Group. “It’s rare as a New Yorker or visitor to the city to experience the skyline at eye level. The rooftop’s immersive outdoor and indoor environments are places to come together and celebrate away from the bustle of the street, but also to be a part of the city’s urbanism on a different plane and at a different scale.”

Phantom on the Road Pop-Up

On Tuesday, November 27, French audio innovator Devialet, a featured brand at 10 Corso Como, will unveil Phantom Reactor—the latest in its luxury line of wireless speakers, in a custom-built, immersive sound room constructed within a shipping container. Visitors can experience the extraordinary sound of Phantom Reactor on the iconic Seaport cobblestones throughout December.

On Tuesday, December 4, The Festival of Lights returns to Front Street with live music by Grammy-nominated clarinetist David Krakauer, food and crafts for the whole family to enjoy, as well as a blessing and lighting of the Menorah.

The NYCEDC has partnered with the Seaport’s Fulton Stall Market to launch a multicultural public market celebrating the best of the holidays and bringing together the diversity of New York City’s historic retail public markets in one place. Located at Fulton Stall Market’s Sunday location at the intersection of Fulton Street and Water Street, featured markets include Arthur Avenue Market, La Marqueta, 13th Avenue Market, Moore Street Market, Jamaica Farmer’s Market and Essex Street Market. Live music and craft beverages add to the celebration. Hours are from 11 am to 5 pm every Sunday from December 2 through December 23.

About The Howard Hughes Corporation®

The Howard Hughes Corporation® owns, manages and develops commercial, residential and mixed-use real estate throughout the U.S. Its award-winning assets include the country’s preeminent portfolio of master planned communities, as well as operating properties and development opportunities including: The Seaport District in New York; Columbia, Maryland; The Woodlands®, The Woodlands Hills, and Bridgeland® in the Greater Houston, Texas area; Summerlin®, Las Vegas; and Ward Village® in Honolulu, Hawaiʻi. The Howard Hughes Corporation’s portfolio is strategically positioned to meet and accelerate development based on market demand, resulting in one of the strongest real estate platforms in the country. Dedicated to innovative placemaking, the company is recognized for its ongoing commitment to design excellence and to the cultural life of its communities. The Howard Hughes Corporation® is traded on the New York Stock Exchange as HHC. For additional information visit www.howardhughes.com.