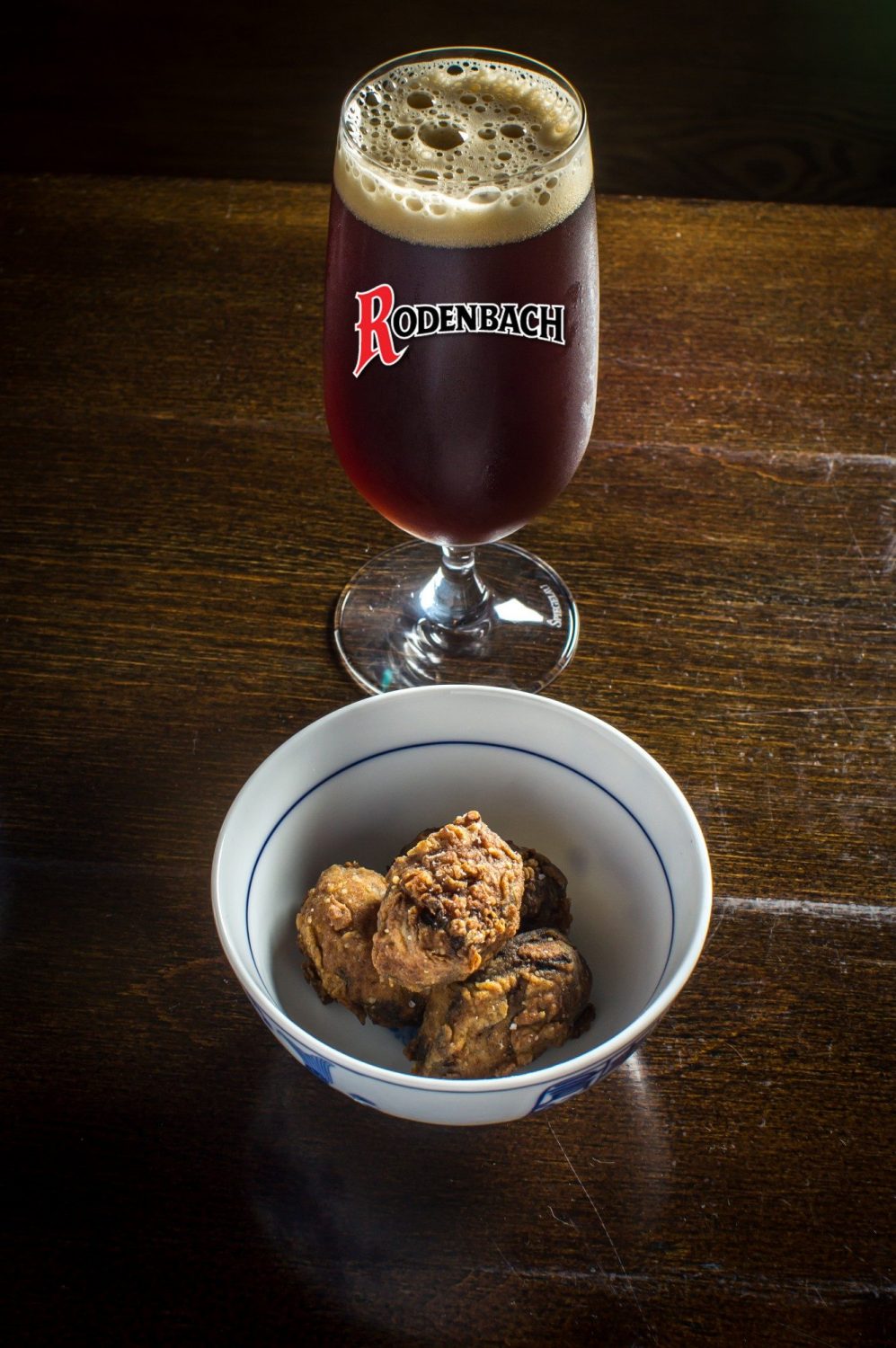 Rodenbach has been producing beers since 1821, originating in Roeselare, Belgium as a small family brewery. The company remained a family-owned operation until 1998 when it was sold to Palm Brewery. However, the ingredients and quality have remained in tact all these years later, and Rodenbach continues to be one of the world’s most respected breweries. Rodenbach can also take credit for being the original creators of sour beer.

One of the places in New York City where Rodenbach is served is the restaurant FUNG TU. For three days only, FUNG TU will be serving a five-course $55 “greatest hits” tasting menu from Nov. 15 through Nov. 17. Following that comes a six-course celebration tasting for $95 on Nov. 18 and 19. Although details are still being worked out, next week is set to include a Rodenbach pairing at the bar of FUNG TU.

Downtown caught up with master brewer Rudi Ghequire and Chef Jonathan Wu to learn more about Rodenbach, FUNG TU and how their offerings complement one another. Rodenbach can be visited online at www.rodenbach.be, while FUNG TU maintains a website at www.fungtu.com.

For someone who has never had sour beer before, how would you describe it?

Rudi Ghequire: It’s going to be different and should open your horizons to what beer can be. The key to any beer is proper balance, so that no one flavor or taste profile overpowers the others. A properly-balanced sour beer will have complex flavors and can often be described more like a wine. In Rodenbach’s case, you’ll often get flavors from the oak casks — foeders — that age our beers. A bit of wood, sometimes a spiciness, but also textured layers of honey and acidity that will taste like a green apple and a sweetness on the tongue. Finally, the flavors of fruit such as sour cherries will leave a lasting impression on the finish that is very refreshing, as a beer should be.

Was Rodenbach the first sour beer you ever had?

Jonathan Wu: The first sour beer I ever tried was a Gose beer that was tart and different than what I knew beer to be. The first time I tried Rodenbach I was immediately taken by what sour beer should be: complex, flavorful and absolutely-refreshing.

Is there any ideal food or meal to have with a sour beer? Or a way to get used to it?

RG: There are many great food options for sour beers. Properly-balanced beers such as Rodenbach Grand Cru will go great with cheeses and light meats such as pork, chicken or fish. Our vintage beers, which come from a single foeder, goes very well with cheeses that are a bit more fatty, and the smokiness of the oak casks really shine when paired with smoked meats and fish.

Rodenbach started almost 200 years ago. Has the original formula of the beer changed much? Is all of your beer still made in Belgium?

RG: All of our beers are made on the property in Belgium, as they have for nearly 200 years. The methods and practices we employ haven’t changed much through the years — but when you think about it, the liquid is live and thus, constantly changing and evolving due to the aging & maintenance of the foeders. We use 100% French oak casks, and we employ two full-time coopers who make and maintain the foeders to bring out the best in the beer. Through this process, we ensure a consistent taste that is to be expected from Rodenbach.

What is coming up for Rodenbach?

RG: We’re very excited about a new offering that we just introduced called Rodenbach Fruitage, and what brought me to New York City. It is a very drinkable beer at only 4.2% ABV. It’s a blend of 1/3 aged beer along with 2/3 “young” beer and includes cherries, raspberries and elderberries for a very fruity flavor that is highly-refreshing and easily drinkable. It’s available in bars throughout New York City now and has been extremely well received. We’re looking at putting the product onto store shelves in cans in 2017.

Do you have a favorite of the Rodenbach beers?

RG: I love all of our beers, as they are all very unique to one another. But if I had to select one, it would be our Caractere Rouge offering. It’s made from two-year old aged beer that comes from a single foeder and then aged with cherries, raspberries and cranberries. It is complex, has great depth of character and is absolutely delicious. It is as complex as a wine, but refreshing and delicious like a beer — I call it “the missing link between beer and wine.”

RG: There are so many great restaurants in New York, and I love spending time here. One of my favorite locations is BXL Zoute, located on 22nd Street near 5th Avenue. It has a light, lively theme that makes me feel like I’m home in Belgium, offering classic Belgian dishes and terrific beers.

What’s coming up for FUNG TU? I hear the restaurant is celebrating its third anniversary this year…

Do you have a favorite item on the menu at FUNG TU?

JW: The great thing about our menu is that it’s a culmination of flavors and taste profiles, so every dish is uniquely different and our guests are invited on a journey of tastes. It’s hard to pick a favorite dish, as there have been so many through the years, but there are some dishes that have stood out the most by our customers. The fried dates, in particular are a crowd favorite.

Other than FUNG TU, do you have a favorite restaurant in New York?

JW: There are so many — New York has so many stellar restaurants. A few that come to mind for me are Okonomi, Uncle Boon, Shalom Japan, Khe-Yo, Ippudo, and The Finch.

RG: I spend a lot of time at the brewery, but when not there I’m also spending time with my family. Particularly with my son who is also brewing terrific beers of his own. I’m working with him, coaching him and helping him to make interesting and unique beers.

JW: I’m always on the go, so I like to run and bicycle when I’m able to break away, but spending time with Jane and George — my wife and son — is what it’s all about.

RG: It’s an exciting time for beer, particularly in America. There have never been so many choices for consumers. My advice would be to expand your horizons. Try new things and experience beers from all over the world so that you can really understand different styles and brewing techniques. Seek out balanced beers that best represent the categories and continue to experiment in all that you taste.

JW: I’ve been lucky to have worked for some great chefs such as Dan Barber and Jonathan Benno. Both have taught me how to cook with integrity and passion, something I take to the kitchen every day. The point is, whatever you do, do it with purpose and passion.