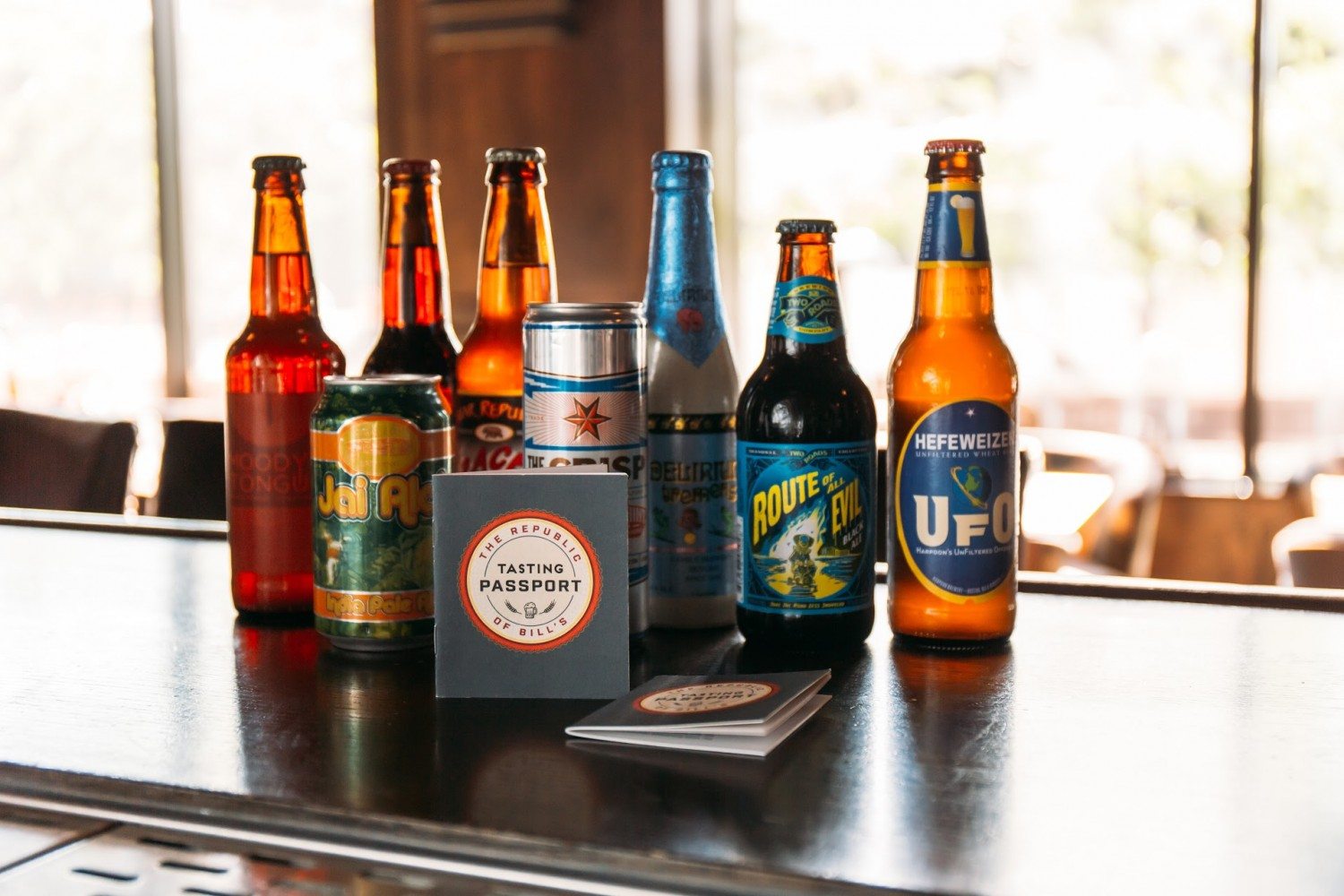 With over 20 restaurants — as split between New York City, Atlantic City, Pittsburgh and Las Vegas — BR Guest Hospitality is the rare sort of hospitality group with restaurants that are loved by both critics and everyday diners. For the person craving a steak, there are multiple locations of Strip House. For the customer chasing a high-end burger, there are several Bill’s Bar & Burger spots. Isabella’s is an Upper West Side Italian spot, Atlantic Grill and Blue Fin offer great fish options, Dos Caminos is known for its Mexican fare, Troy Liquor Bar in the Meatpacking District focuses on premium drinks…So many options, to say the least.

Currently, BR Guest has a number of interesting promotions going on. Bill’s Bar & Burger is partaking in the Summer Of Suds. A contest running through Sept. 30, guests can head to any Bill’s location to pick up a beer passport. The more beers tried — over 120 domestic, international and seasonal brews are currently available — is the better one’s chance is at winning prizes, including a trip for two to Belgium. Strip House is offering Steak To Go kits, which can only be purchased through Labor Day.

To learn more about all things BR, Downtown caught up with BR Guest’s Corporate Beverage Director Richard Breitkreutz and chef Michael Vignola. Richard got his start at Danny Meyer’s Union Square Hospitality Group, and under his watch in 2004, Eleven Madison Park received the James Beard Award for Outstanding Service in America. He otherwise worked with Chef Tom Colicchio’s Crafted Hospitality Group and the BLT Restaurant Group before coming to BR Guest Hospitality in 2014. Chef Michael is the Corporate Executive Chef for all Strip House and Bill’s Bar & Burger locations. Prior to joining BR in early 2012, he was the Executive Culinary Concept Chef of H2 Hospitality, also having worked under Chef John Schenk, Citarella’s Chef Brian Young, and Le Bernadin’s Chef Eric Ripert.

BR Guest Hospitality can be followed online at www.brguesthospitality.com. Many of the BR Guest spots keep homes on Twitter including Bill’s and Strip House. Chef Michael is also on Twitter as @MichaelViggz.

Where did the idea for Summer Of Suds come from?

Richard Breitkreutz: We thought it would be fun to honor and promote our selection of beers from around the world. The idea of a passport and then getting it stamped with each beer consumed was born. We feature a fair number of Belgian and Belgian-style beers, so we partnered with one of our producers for a grand prize trip.

Do you have a favorite brand of beer?

RB: I do not. I admire many producers. I have joked that my favorite is the one in front of me.

How would you describe Bill’s Bar & Burger to someone who hasn’t yet been there?

Michael Vignola: I would describe Bill’s as a modern take on the quintessential American burger joint.

Do you have a favorite item on the Bill’s Bar & Burger menu?

MV: I love all the items on the menu, but the Mini B’s have a special place in my heart.

Are all of the Bill’s Bar & Burger locations the same? Or are there differences among them?

MV: They’re all a little different, with a core menu that is the same. We adjust accordingly to the size of the store, location — Midtown versus Pittsburgh) — etc.

Was it always the plan for you to work within the hospitality world? Did you ever dream of a different career?

RB: I moved to New York to pursue a career in music. I was in a band. We did pretty well but it did not come to fruition. I always had a passion for food and wine and when my music career ended, this business was an obvious choice for me. I had been working as a server and bartender while pursing music. I have studied with the Wine & Spirit Education Trust and the Court of Master Sommeliers.

MV: When I was a child, I wanted to be an artist and travel the world, and in a way I have done that through my journey as a chef.

Who or what specifically inspired you to pursue this path?

RB: I was working in a restaurant who outsourced their staff education and wine list to a consultant. I thought to myself, “Wow, this guy does this for a living.” I started studying wine almost immediately.

MV: I fell in love with the whole family aspect and the herculean push that goes into to every little detail. I love the attention that goes into everything behind the scenes that allows us to create emotional souvenirs for our guests. Whether it is the ripest tomato or the pressed linens and perfectly-portioned fish, the details have to be perfect. I have been very fortunate to work under some of the world’s greatest chefs and hone my craft under their tutelage.

What was your first job in this field?

RB: I was a dishwasher in a little restaurant in Colorado at the age of 14.

MV: I started as an intern at Le Bernardin in high school, I was a punk with blue hair and piercings. I assisted the receiver checking in products, I didn’t know then the lessons I was learning and how important quality was.

When it comes to managing the beverage programs at multiple restaurants, what are the tools that enable you to do this?

RB: Obviously being very organized and having good time management skills is helpful. Overall though, it is really my passion and drive that make it possible. I love my job!

MV: I live and die by the calendar; it is not easy by any stretch of the imagination. I also try to set my week up with a written to-do list and am constantly writing notes to myself to revert back to later in the day. I also have learned to set up my e-mail box better to help categorize and manage the heavy flow of fodder throughout the day.

Do you have a professional accomplishment that you’re most proud of?

RB: Winning the James Beard Award for Outstanding Service when I was the GM at Eleven Madison Park was easily my proudest moment.

MV: There are a lot of moments that I’m proud of. Recently we were named one of New York Magazine’s Top Steakhouses in NYC. I am also very proud of the recent relaunch of Bill’s in Pittsburgh. But one of my most satisfying accomplishments was my first James Beard Dinner. That was entirely my own menu with my crew of chefs that I had worked with throughout my career.

Beyond Summer Of Suds, what additional beverage programming coming up for BR Guest?

RB: We are reopening Blue Water Grill right after Labor Day after a brief renovation, so there is a focus on all of the beverages there from sake to beer, to wine and cocktails. We change our cocktails seasonally companywide, so we will begin working on fall cocktails soon. And with the fall season, we will be adding to all of our wine lists getting ready for Q4.

Beyond Summer Of Suds and Steak to Go Kits, what’s coming up for Bill’s Bar & Burger and Strip House?

MV: We are working on a lot of things. For Strip House, we are playing around with coal, firing vegetables and dry-aging veal racks as well as trying to do more vegetables table-side. I have a brussels sprout idea that’s out of this world. For Bill’s, we are in the process of redoing our menu and creating these monster shakes. We are also continuing to partner with various public figures to create their signature burger.

RB: I love to travel. We have been all over the world. Cooking is also real passion for me.

MV: At Isabella’s…No, but honestly, I love spending time with my wife Michele and three monsters; Mia, Mikaela and Ronny. I try to make sure I spend as much time as possible doing something fun together, either at the beach in the summer or Sunday sauce over football.

Do you have tickets to any upcoming concerts or events this summer?

RB: We try to escape into the woods every chance we get in the summer.

MV: I will be at the Jets home opener cheering them on with my brother Mathew.

RB: The world of beverage is more exciting now than it ever has been. I count myself as very lucky to get to work in all aspects of it every day.

MV: Stay humble, relentless and behind the line…and always cook with your heart.