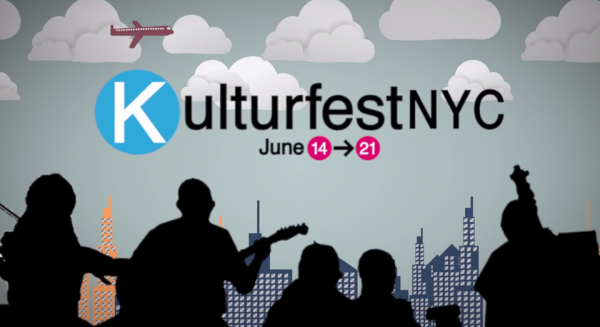 A week-long celebration of Jewish arts and culture kicks off with an all-star concert at Brookfield’s Winter Garden!

The first-ever week-long celebration of the impact on Jewish culture on the world –KulturfestNYC, will launch its slate of event with an exciting Grand Opening Concert featuring the Grammy Award-winning band The Klezmatics, along with pop icon Neil Sedaka and an array of superstar guests on June 14 at Downtown’s spectacular new Winter Garden at Brookfield Place!

Presented by National Yiddish Theatre Folksbiene at MJH, now celebrating its centennial season, in collaboration with UJA-Federation of New York and Capital One Bank, the weeklong festivities will commence June 14th and run through June 21st all day and night jam-packed with incredible theatre, music, dance, film, cuisine, street performances, family programs, panels, lectures to inspire and entertain you.

Pop legend Neil Sedaka will be one of the feature stars of the opening concert at KulturfestNYC!

The weeklong calendar of events will culminate with a screening of the moving film Theodore Bikel: In The Shoes of Sholom Aleichem.

The film about he iconic Russian-Jewish writer is narrated by Emmy-winning actor Alan Alda and Aleichem is brought to life by the actor most identified with his work – the great Theodore Bikel.

Jewish arts icon Theodore Bikel stars in the one-man heralded film, In the Shoes of Sholom Aleichem which closes KulturfestNYC.

The 90-year-old, Austrian-born, American hero of the arts has played Fiddler on the Roof’s, Tevye The Milkman, more than 2000 times and has animated an array of Aleichem’s work through his creation of two celebrated plays about the great Russian author.

“There is no more fitting culmination to this celebration of Jewish arts and culture than in a film that honors one of its greatest writers with one of our best actors – and men – Mr. Bikel,” says one of the festival’s esteemed sponsors, Elie Hirschfeld.

Hirschfeld who has been a visible supporter of the culture and Jewish causes in America and Israel thinks Kulturfest is a key event in New York for anyone who enjoys the arts – no matter what their background.

“Kulturfest is a gift to our city, which entertains, informs and educates the general public in a joyful celebration of Jewish culture and artists in a joyful manner we can all truly enjoy and treasure!” says Hirschfeld.