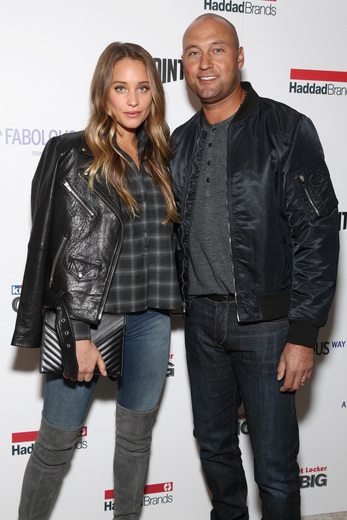 The show opened with Fabolous giving a shout out to his Brooklyn roots and namesake non-profit organization A Fabolous Way, which helps New York communities in need. It also featured Street Justice Crew and Bobbi Chambers of Broadway’s School Of Rock, as well as twin DJs Amira and Kayla of Little Club Heads spinning live throughout the event.

Host Fabolous told Downtown why his A Fabolous Way Foundation is so important to him: “Growing up in Brooklyn, there weren’t a lot of opportunities. I feel it’s important for me to create or be a part of initiatives that benefit and help build a stronger foundation for our children. Because less opportunity becomes more opportunity to get into the wrong things in the inner city.”

Teresa Giudice told Downtown: “When I watch my daughters on the runway, it’s pretty exciting. I am a proud mommy.”

Nigel Barker, whose children also walked in the show, was asked if he gave his children any tips. He responded: “I try not to give them too many tips. Actually, I think the more natural they are, the better.”

About the event, Fabolous added: “My son Johan loves walking in the Kids Rock shows and we always enjoy ourselves. I always appreciate Haddad Brands for involving the community and helping show the kids that being charitable is also cool thing. It’s more than a fashion show, it goes towards a good cause.”

All of the clothing presented on the runway is currently available at Kids Foot Locker, located at 440 Fulton Street two blocks from the event venue. In addition, City Point debuted its BKLYN BORN collection, a tribute to borough pride, sold exclusively at the Brooklyn epicenter with 40 percent of proceeds benefiting A Fabolous Way.