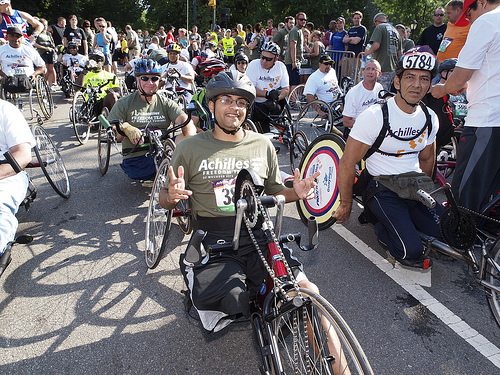 More than 3,300 runners, walkers, hand cyclists and wheelchair athletes participated in the event from around the tri-state area.

Hosted by Jon Stewart of Comedy Central’s Daily Show, and in it’ 13th year, the race has become a showcase eent for the Achilles National organization which is a non-profit organization founded in 1983 to provided competitive opportunities to people with disabilities.

Launched right here in New York City, the Achilles Organization has grown into a national movement with 65 chapters throughout the United States and overseas.

Able-bodied volunteers and disabled runners come together to train in an environment of support and community. Within this community, runners gain measurable physical strength and build confidence through their sense of accomplishment, which often transfers to other parts of their life.

Achilles has also developed specialized programs for children and disabled war veterans. The goal is provide hope, inspiration and the joy of achievement to people who previously thought that they had no possibility to even compete.

“It’s truly inspirational to have the opportunity to just compete alongside such people who have the heart, desire and sheer will to overcome what other people might consider a handicap,” says Hirschfeld.

“These athletes deserve respect for their bravery and their abilities in proving that that word is not only obsolete…it is meaningless to them and anyone who has the privilege to observe their accomplishments.”