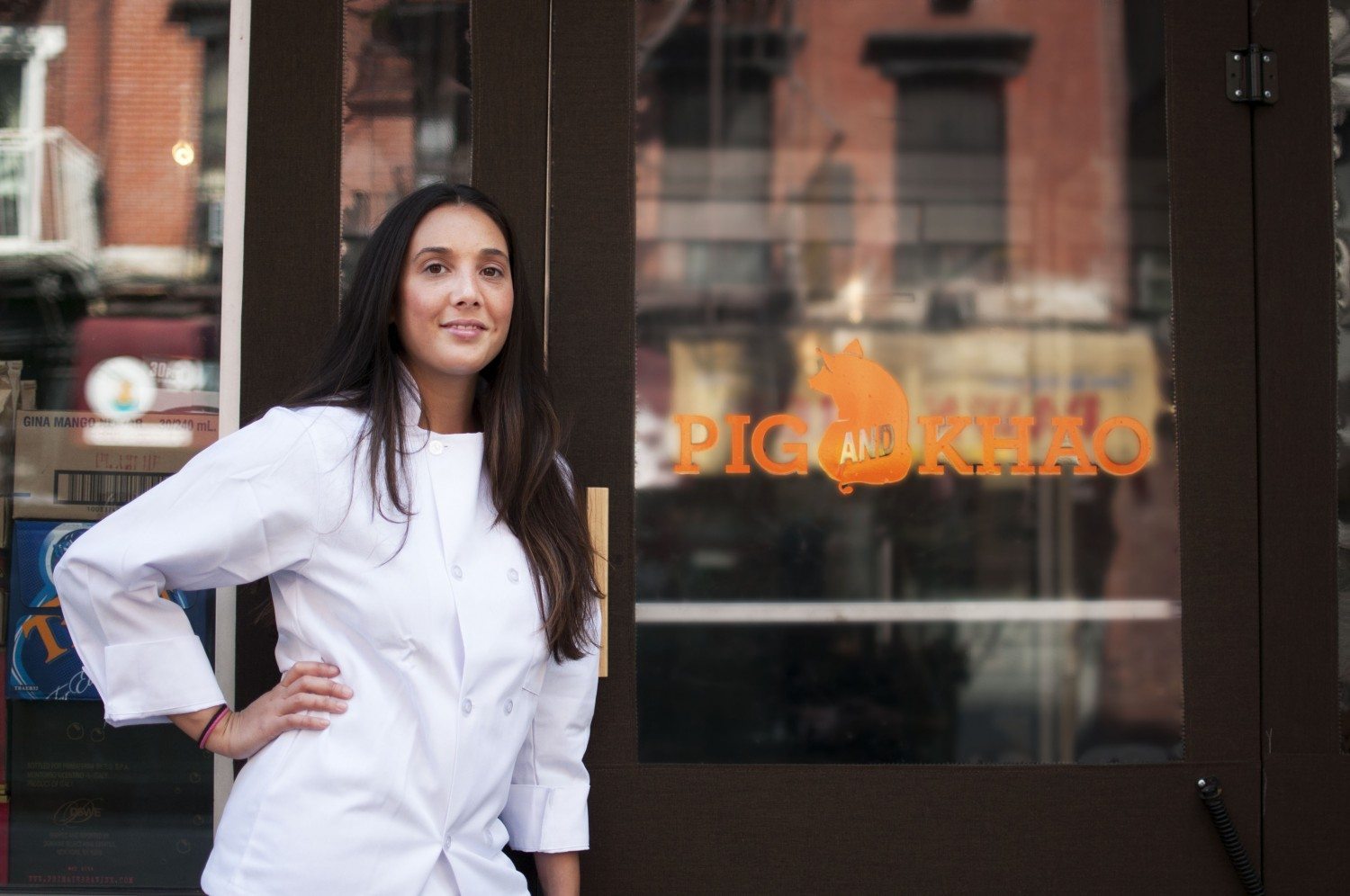 A lot of people first took notice of Leah Cohen from the fifth season of Top Chef, but success did not come overnight for Leah. The New York native attended Peter Kump’s New York Cooking School — now the Culinary Institute of America — as a teenager before working for Chef David Burke at Park Avenue Cafe. The Michelin-starred La Madia in Sicily was Leah’s next destination, as followed by Eleven Madison Park. Next she was part of the team at Centro Vinoteca, starting as a sous chef and eventually moving up to Chef de Cuisine. Following her Top Chef exposure, Leah spent a year traveling around Asia, learning from top chefs in Hong Kong, Thailand, Vietnam, Singapore and the Philippines.

Less than five years ago, Pig & Khao is the product of Leah’s Asian travels, mixing her New York technique with traditional Southeast Asian street food. Pig & Khao has been voted “Best Asian Restaurant in New York City” by Zagat, and “Best SE Asian Restaurant in New York City” by the Epoch Times. New York Times food critic Pete Wells gave Pig & Khao a two-star review — which is harder to earn than it sounds — and Mario Batali recently named Leah as one of three on-the-rise chefs to watch. In turn, Leah has appeared on NBC’s Today Show and CBS This Morning, has been a judge on the Food Network’s Beat Bobby Flay, and has been featured in Food & Wine, Saveur, and Harper’s Bazaar.

Downtown had the pleasure of speaking with Leah via e-mail. She not only opened up about Pig & Khao, but what it is like working with your husband. Leah can be followed on Twitter via @ChefLeahCohen, while Pig & Khao can be visited online at www.pigandkhao.com.

You and your husband Ben work together in the culinary world. What are your specialties versus his?

Leah Cohen: I handle everything in the back of the house. Hiring and training the kitchen staff, all of the menu development and ordering. Ben handles more of the business side of the restaurant. He handles the day to day operations, paying bills, training servers and social media. Sometimes, we have to help each other out and cross over, but for the most part we stick to what we are better at.

How did the idea for you two to work together come about?

LC: Ben was actually hired as my line cook when we first opened and was quickly promoted to sous chef based on his skills. He was my sous chef for about a year until he made the switch to front of house. It’s much better for our relationship that we aren’t directly working together in the kitchen.

It’s known to be challenging to work alongside a spouse or partner. How do you manage to make it work so well?

LC: It can definitely be hard working with your significant other, but we do a good job of keeping business and personal lives separate. We try not to bring home any work drama, and if we do, we just let it out and then move on.

Do you feel that there are any misconceptions about life as a chef?

LC: A lot of people think it’s a glamorous job, which it’s not. It’s a lot of long hours, hard work and dedication. And it doesn’t get any easier when you are an owner or your own boss.

How would you describe Pig & Khao to someone that has not yet been there?

LC: Pig & Khao is a Southeastern Asian restaurant which focuses on Thai and Filipino food. The dishes on the menu are inspired by my trips to Southeastern Asia and are meant to be authentic in flavor. The food is served family-style and meant to be shared. The vibe is super low-key fun and unpretentious.

As a chef, where do your creations usually come from? Is it word of mouth and suggestions from other chefs? Recipes from magazines and cookbooks that you adapt? Experimentation?

LC: I usually get inspired by my travels when I do my annual R&D trip to SE Asia. I also get inspired by eating out, reading cookbooks — I especially love David Thompson’s books — Instagram accounts and blogs.

Do you have a favorite item on the Pig & Khao menu?

LC: My favorite menu item at Pig & Khao is a dish that has been on the menu since day one. The dish is called Khao soi, and it was the first dish I knew I wanted to put on the menu. I had it for the first time while traveling in Chiang Mai, Thailand, and I became obsessed.

What are some of the recent additions to your menu?

When not busy with Pig & Khao, how do you like to spend your free time?

LC: In my free time, I like to hang out with my friends and family members. I also am somewhat of a gym rat, so I spend a couple of hours a week working out. I also have somewhat of an online shopping addiction, which I’m trying cure. (laughs)

Other than Pig & Khao, do you have a favorite restaurant in Manhattan?