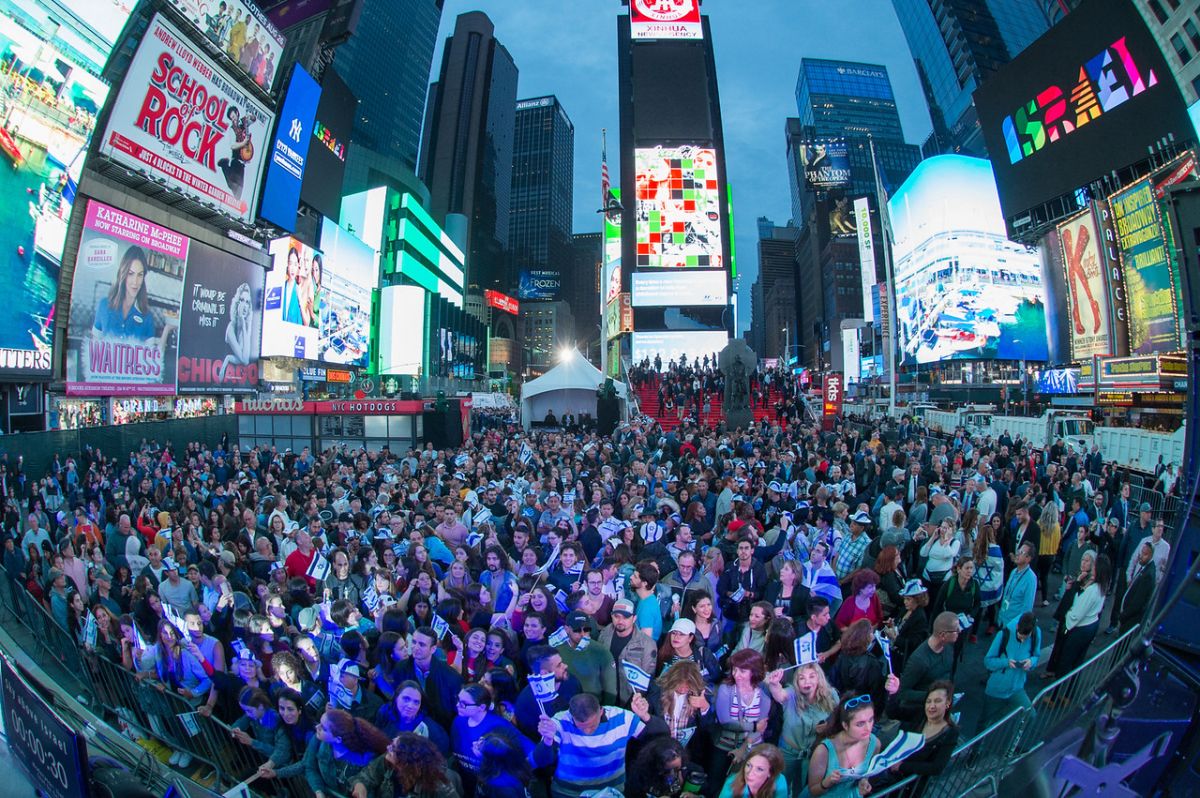 Times Square rocked with thousands of partygoers on Sunday evening, as New Yorkers, Israelis, and tourists from around the world came together to celebrate Israel’s 70th anniversary.

Headed by Israel’s Ministry of Culture and Sport, and the Consulate General of Israel in New York, the enormous block party began at 8:00 pm with a countdown in the timeless style of New Year’s Eve parties in the square.

The beat dropped, and the party raged!

Performances by Israeli Broadway star Shiri Maimon and DJ Omri Anghel took control of the rest of the evening. Crowd favorites included hits by Omer Adam, Moshe Peretz, and Israel’s Eurovision champion Netta blasting out from the heart of the city.

Along with Maimon and Anghel on stage were Israel’s Minister for Culture and Sport Miri Regev; Israel’s Consul General to New York, Ambassador Dani Dayan; and MKs who had joined a delegation for to New York.

Excitingly, Sunday night’s event marks the first time a foreign country has held a celebration in the iconic plaza. The atmosphere lived up to the best block parties Israel has to offer.

The famous screens surrounding the partygoers broadcasted spectacular images of Israel’s “History of Innovation” for much of the evening, sharing the Jewish state’s progress and prowess in science and technology. The screens also showed highlights of Israel’s stunning scenery and cultural and religious depth.

Preceding the party, a VIP reception was held in the Renaissance Hotel overlooking the square. Minister Regev and Ambassador Dayan hosted the evening. National anthems were performed by Gloria Gaynor and Shiri Maimon, who sang the Star-Spangled Banner and Hatikvah respectively.

SPECIAL QUOTES OF THE NIGHT

Minister for Culture and Sport, Miri Regev: “Tonight, we painted Times Square in blue and white. It was exciting to see thousands of Israelis, tourists, and locals dancing and singing Israeli music together. I would like to thank the American leadership and people for their unqualified support for the State of Israel. We have again demonstrated our strong relationship with the United States.”

Consul General of Israel in New York, Ambassador Dani Dayan: “Israel and the United States have the strongest partnership in the world, and tonight we marked it in an unprecedented way…. I am proud that we marked our country’s special birthday with so many close friends and supporters, coming from every walk of life here in New York.”

In attendance were elected officials, leaders of the Jewish community, and significant figures from the worlds of academics, business, and media.