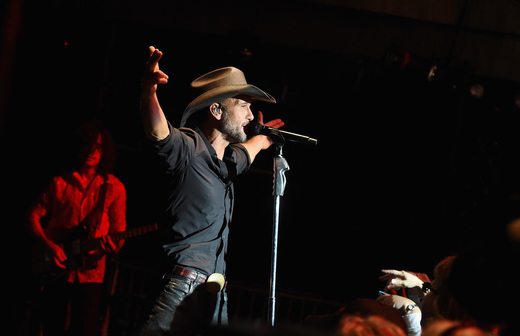 In a venue characteristically small for someone of McGraw’s stature, hundreds of enthusiastic fans made their way to the Pandora radio-hosted event on Wednesday night to celebrate McGraw’s latest release, Damn Country Music.  In a twist, the event itself was actually free, and fans were able to RSVP for it on EventBrite, however, it did not guarantee admission into the party.  According to several staff members, some fans had been waiting in line as early as 4 a.m. to see the country superstar.

Though the show was to celebrate his new record, it played a minimal part of his set.  Instead, McGraw was all about the hits, playing classics such as “Real Good Man,” “Just to See You Smile,” and “Live Like You Were Dying.” McGraw himself is an experienced performer; a dependable country artist — an important aspect in country music — and where longevity is part of being skyrocketed to stardom.  His skills have not diminished over time; he worked the crowd like a true artist, with his ever-present smile, signature cowboy hat, shaking hands while singing without missing a note and letting audience members sing along to his hits at just the right time.

The show proved that, while McGraw may not dance like Luke Bryan or have other performance quirks, his music has resonated with a loyal fanbase that will continue to be around for years to come.