The Los Angeles Guitar Quartet talks to Downtown about its Nov. 5 show at the 92Y 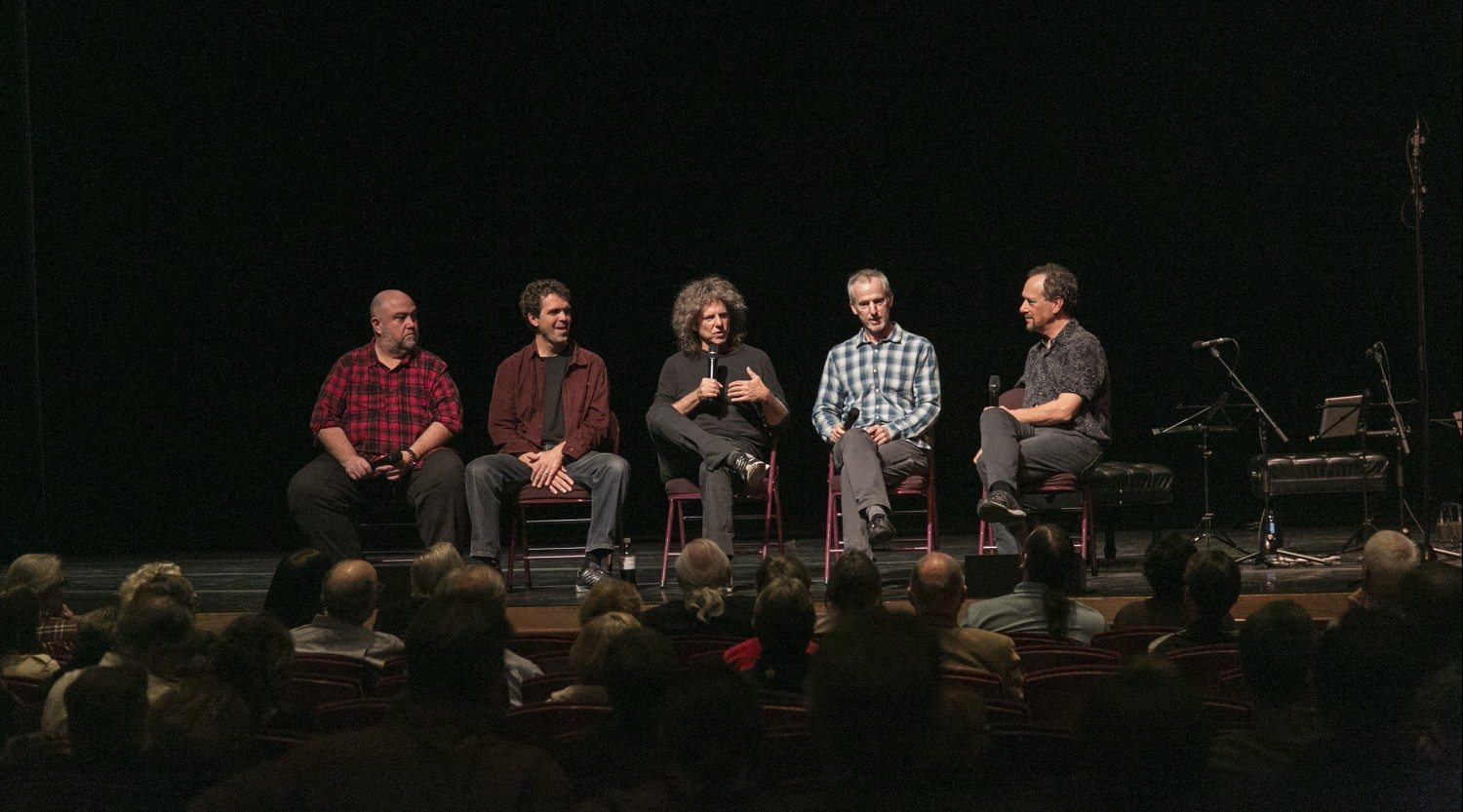 The Los Angeles Guitar Quartet is a Grammy-winning ensemble that formed in 1980. Its current lineup of John Dearman, William Kanengiser, Scott Tennant and Matthew Greif — Matthew replaced original member Andrew York in 2006 — has toured around the world, playing everything from bluegrass to Bach. The ensemble’s worldwide acclaim has led to notable composers writing music for the LAGQ to perform, one recent example of such being by guitar hero Dweezil Zappa.

On Nov. 5, the Los Angeles Guitar Quartet makes a return to 92Y, a venue the group has a long-standing history with. This evening will feature a performance of the Pat Metheny composition Road To The Sun, which 92Y co-commissioned. Mr. Metheny will be in attendance for the event, which opens 92Y’s Art Of The Guitar series.

Downtown caught up with John Dearman, William Kanengiser and Scott Tennant for some Q&A about their Nov. 5 show, their personal histories with our city, and what else is coming up for the LAGQ. More info can be found at www.lagq.com.

Scott Tennant: I don’t know if it was our first New York City performance or not, but I strongly recall our Merkin Hall debut. I remember walking up to the hall excited, not nervous at all. Couldn’t help but be energized by the New York musical vibe!

William Kannengiser: My New York City performance was at my Senior Recital upon graduating from the Mannes Conservatory Preparatory School in May 1977. I was a high school senior living in New Jersey, and I studied guitar, Music Theory and Ear Training at Mannes for three years, making the trek into the big city every Saturday. It was my first complete solo recital, and right in the middle of it a huge storm hit, replete with lightning and huge claps of thunder. Somehow I maintained my composure and got through it.

John Dearman: I think the first time we played in New York City was for the Concert Artists Guild competition held annually at Carnegie Hall. I remember that we stayed in a hotel across the street from Carnegie and someone told me that Van Cliburn lived in that hotel — not, like, stayed there when in town, but LIVED there! That impressed me, that a classical musician was living like a rock star.

And on the evening of our performance in the competition, just beforehand, I decided to stop in at the Russian Team Room, right next door to the entrance to Carnegie. And who did I see? Woody Allen himself — who famously was a regular there — with Mia Farrow. So, even being from L.A., I was pretty starstruck on my first visit to the Big Apple.

What’s to be expected from your upcoming show at 92Y?

ST: An intoxicating drink of hip and sexy music from Latin America, plus what we think will become one of the more important guitar works from one of the most important and influential guitar players of our generation.

WK: This would be the “troisiéme”, or third performance of Pat Metheny’s amazing Road To The Sun. Having gone through the first-performance jitters at the world premiere in Denver two weeks before, and with a ton of tweaks suggested by Pat and another performance under our belt in Santa Barbara, I’m looking forward to us just sitting back and enjoying the ride. It’s also going to be fantastic to work with Pat again on little details and having him in the house to inspire us.

JD: Well, it will of course be very special because of the Metheny performance with Pat in attendance. So we’re pretty psyched about playing there as it’s really one of our “home” concerts where we have a very loyal following. I think this will be something like our seventh or eighth appearance at 92Y.

Any restaurants or attractions in New York you’re hoping to check out while in town?

ST: My absolute favorite place is gone. You’ll think I’m crazy, with all the foodie shrines in Manhattan. But I always went to Big Nick’s on Broadway and West 77th! The flight from L.A. would always land at JFK [Airport] in the evening, and my routine was to check into my hotel across the street and immediately head to Big Nick’s for a huge Greek salad and a burger — usually around 11:00 PM or midnight. No matter what the weather was I would sit out in front under the seemingly-eternal scaffolding and eat while watching people walk by.

WK: My wife is celebrating a big birthday today, and in honor of her I’m planning on having a nice spinach and goat cheese omelet at the lovely Sarabeth’s Kitchen on Madison and 92nd. I’ve had many memorable breakfasts there with my wife and daughter when we’ve come to New York City to play.

JD: Eating and museums are always top priority for me when I visit. I always pay a visit to MoMA and then try to fit in something extra like the Frick or some galleries. Haven’t done my research on restaurants yet but one thing I’ve always loved about New York City is the abundance of great old-style Italian, so-called red-sauce joints, so I’ll try to hit one of those. Also have never been to Peter Luger’s, so I may head out to Brooklyn…

What is coming up for you after the show at 92Y? Other projects?

WK: We’re planning on a recording project featuring Road To The Sun as the centerpiece, as well as a piece recently written for us by Dweezil Zappa. In April we’ll be premiering a piece for LAGQ and guitar orchestra by former LAGQ member and acclaimed composer Andy York. We’re going to do a three-concert tour in Arizona with a 40-member orchestra of talented student guitarists from all over the state. It will be partly based on traditional Havasupai chants.

ST: I will have a little dog soon and that will take over my free time. But otherwise I like collecting and riding odd recumbent trikes. I also like lifting weights. It focuses me and calms me down like nothing else can.

WK: I love to cook. I just made my wife some cast-iron seared sushi-grade ahi with a sesame, chia and nigella seed crust, topped with a soy, miso and olallieberry reduction, along with grilled Japanese eggplant and roasted Yukon gold potatoes with chives and crème fraîche. Cooking for others is a creative, relaxing and rewarding respite for me.

JD: I’ve got a serious motorcycle habit: three bikes including a restored 1973 Norton 850 Commando. Also, spending too much spare time — and money — on golf these days! Played in Ireland last summer when we were on tour there. Why do otherwise sane people play golf in the wind and the rain?

WK: I have two, but they actually share the same title. Sephardic Journey by Apollo’s Fire has some incredibly evocative early music from the Jewish diaspora, reminiscent of the work of Jordi Savall that inspired me so much in adapting our Don Quixote project. Sephardic Journey by the flute/guitar husband-and-wife team Cavatina Duo features world premiere recordings of new chamber works commissioned especially for this heartfelt CD. All the works are inspired by Hebraic themes, including wonderful pieces by my friends Clarice Assad and Carlos Rafael Rivera.

JD: Not sure about a favorite album…I’m on Spotify most of the time now. Listened to a lot of Bowie after his passing, in catch-up mode; I missed out on a lot of great moments from the past when I was obsessing about becoming a classical musician. One of my favorite new discoveries was Rene Jacobs, conductor/early-music specialists. I watched all the YouTube videos of a guy who has a channel called 80-20 drummer where he does lessons in how to play like Jack DeJohnette, or Mark Guiliana, Stewart Copeland, gospel licks, rap drummers — I’m kind of all over the place in my tastes.

WK: It going to be quite a night for us, helping to realize Pat Metheny’s creative vision, with him sitting right there in the hall. It’s thrilling, inspiring, humbling and terrifying all at the same time!